Well, looking at the mlb.com headline about Girardi (see my last post), we've got this:

Haha! Nice try, Girardi. Nobody was buying your crap. Well, actually, maybe lots of people did, I only checked that one source. If anybody finds a "Girardi fires up team" headline, let me know.

We're only down 2, this game isn't over, but I'm just saying, if we lose, I officially call a fake-fire-up by Girardi. With Sabathia up 2-0 and dominating, Girardi pretended to get mad over a call that wasn't egregious, knowing he'd get credit for "firing up" his team and "turning things around." It was so obviously fake that Castig and O'Brien said exactly what I said on the air.

So if they win, the headlines should be "Yankees victorious; Girardi's ejection obviously irrelevant."

I've been talking about these fake-fire-ups for years, it's funny to have announcers actually acknowledge it for a change. We'll see if the headline writers agree....IF the Yanks win. How sweet would a fake-fire backfire be?!

You ever listen to this dork? I'm talking about Joe Ba-dingo's partner on the midday show on the FAN. He's starting to believe his own hype which makes him even worse than he used to be. I don't hate the guy, I just don't see how he deserves to have a job. Anyway, these guys are both Mets fans, but Evan decided he was gonna start today's show by telling everybody how realistic he is and how he refuses to be a "shill Met fan" and wave the pom-poms. Terrible job. This is the chance for Mets fans to brag and go nuts and be happy for once. But "Evan" was too cool for that. He said Mets fans should only be disappointed when they look at their team right now.

So it was even sweeter when Steve Somers started his show tonight with exactly what I expected: an over-the-top braga-fuckin'-docious monologue with tongue pressed only lightly in cheek about how these four days will go down in New York folklore, and how Girardi looked just as lost as his team did. It was eee-eff-eff-in' great. I can only hope Evan heard it and realized what he decided to deprive himself of.

I Can't Believe What I Just Saw

It's no exaggeration when I say I would have been happy if the Mets had won a game out of the four in their home/home with the Yanks. And they go and win all four. Supafly. Great job, Mets. Any Mets fan I see in the next few days will get thanks from me. Hearing "let's go, Mets" in the stands at Yankee Stadium as the Mets are about to win their fourth straight against the Yanks is every Red Sox fan's dream.

At the point the Mets won, the Sox game was still close. Fairly. But we tacked on a bunch of late runs for the easy win. So we're two games up on the Yanks headed into our weekend series in The Bronx.

Weird job by David Ross singing along to "Man, I Feel Like A Woman."

Bad job by Bradford not being familiar with a waste pitch.

Terrible by job by Don on Salty's near-dong. Oh yes, I'll be doing a video about that one. Stay tuned.

Did I hear Jenny Dell say that Jackie Bradley wasn't just named after Jackie Wilson, but is his grandson, too? How does a piece of info like that just come out of nowhere. I see nothing online about it, though I do see that Wilson had lots of kids and there's even a person who claims to be his daughter since Wilson raped her mother. So I guess there's a chance the family just discovered that either the mom or dad was an offspring of Mr. Excitement, but I'm guessing for now that Dell was smoking crack, and was getting higher and higher as the game went on. Because when Jackie told us all he was named after Wilson, don't you think he would have added, "who, by the way, is my grandfather"?

The Mets did it again, incredibly. Scored five in the first, taking all the pressure off of me, as they easily beat the Yanks for the third night in a row. So our loss wasn't that bad, though it kinda stinks that we ended up coming so close in the ninth, getting the tying run to third. We stay a game up on the Yanks. O's now 2.5 back, Rays 3 out.

Has anybody said why we're wearing the batting practice hats for games? Just for the hell of it? I guess other teams have been doing this? Am I the only one who doesn't know what's going on here?

By the Mets of all people! In a normal year, we'd be one back right now, as the Mets would have found new and exciting ways to give the Yankees two games. But for some reason, they've won two. Tonight, after a Marlon Byrd error gave the Yanks a 1-0 lead going to the bottom of the ninth, Mo came in for the save. He faced three batters. The first doubled, the next singled (and Mo didn't back up home plate, which cost his team as the throw got away moving the winning run to second), and the third singled in the winner. A blown save--Mo never does that! Except in Game 7 of the World Series and stuff. I love how he rolled his eyes after the bloop double that started the inning. That's exactly what the rest of us are doing every time you throw a pitch a foot outside that's called a strike, Mo! Beautiful job by the Mets, keeping us a game in front in the A.L. East.

The Red Sox scored a run off Cliff Lee in the first, but couldn't do John Squat after that in the 3-1 loss. The weird new home/home Interleague Shit Week Series moves to Philly for the next two.

There's a video I made about a Don/Rem error. I actually mentioned this play a few weeks ago. It was the one with the Ike Hilliard reference. I make mistakes of my own in the video, but as far as you know I purposely had Trupiano make them to show he's rusty. Rusty enough to think Joe's name is "Trupe"....

Move Along, Nothing To See Here...

Let me get this straight. Yesterday, every single player in baseball had camouflage clothes on. Pitchers were reaching into their arsenals to fire bullets, batters were hitting bombs, and fielders with cannons for arms were throwing lasers to first base. Anybody can say/do any of this stuff and it's fine. Yet one announcer calls a broken bat a "dead soldier" and people lose their minds.

I don't know if Keith Hernandez has been forced to make a "statement" yet, but I hope if he does, it's something along the lines of "Every baseball fan and military person knew what I meant, and therefore I apologize to no one as it would be completely unnecessary to do so. I refuse to run my life based on whether or not Twitter 'lights up' in reaction to things I say."

Red Sox WIN 9-3. That was cool how the Phillies' starting pitcher was a Nebraskan Red Sox fan, while I'm a New Englander Cornhuskers fan. Even cooler that he gave us a bunch of early runs tonight, and we never looked back. The only stain on this day was those idiotic digital camo color-stealing hats and uniforms. Kim noted it looked like birds had shit on all the players' rusty surgical caps.

THANK YOU METS! This was such a key win, taking the first of a forked four against the Yanks, in a non-Harvey start! I figured that was the only one they had a chance in. Instead, they come up with an 8th-inning tie-breaking run to vault the Red Sox into first place by ourselves. Fourth-best record in baseball.

Tuesday night it's Harvey against the Yanks and Dempster vs. Cliff Lee.

Went to a wedding in Providence tonight, and this was what we saw when we arrived:

And this was looking exactly straight out from the front door of the hall. Pret-ty, pret-ty, pret-ty...good. Fortunately the official photographer-types noticed this in time, so that'll be a sweet addition to their album. (It was also a Jewish wedding so we got to see the stomping of the glass and the crowd-surfing in chairs. And they played Dead Milkmen. Not Cheesecake Truck, though.) (Terrible job by me not aiming up more to show all of the upper 'bow.)

I'm always pointing out when people use the old version of the Circle Sox logo. I'd like to give this girl credit for using the updated one: 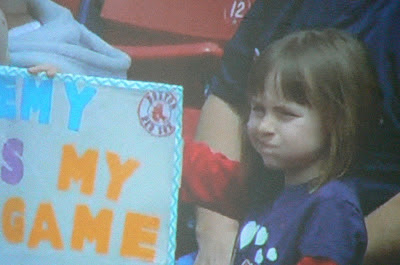 If a four-year old knows about the change, which was made in, say it with me now, 2008, certainly a Boston TV station should, right? Wrong: 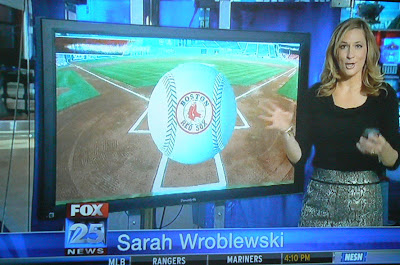 Just another of the many news outlets and other official sources who are completely clueless.

During that ninth inning, I kept thinking of how I'd let NESN slide on all their errors and just talk about the win IF it happened. Sure enough, they don't even show the winning run score, choosing to show a low-angle shot of what turned out to be some guy's butt. Meaning I end up mentioning them in the first paragraph after all.

But that aside, what an amazing comeback win. Down to our last strike, we end up scoring four times in the bottom of the ninth to take three of four against Cleveland and move into a first-place tie with the Yanks, who got spanked.

I thought that new pitcher, forced to come in with a 2-1 count and the tying run on third, would throw two balls to Ellsbury to tie it up. But Ells was correctly thinking he'd get a strike, and he nailed it. Two runs score and we WIN. Awesome.

On the pre-game, they talked about the Red Sox doing great in day games, and had Jim Rice talk about hitting in the daylight. They put together a highlight package of Rice hitting in day games, which included...a night game. At the Kingdome. (It was Rice singling off of Mike Moore to lead off the fourth inning on Friday night, July 13th, 1984. Detective work by Jere.)