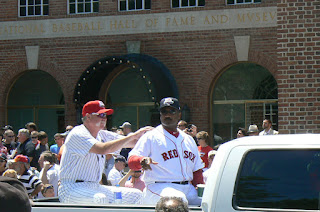 I was pissed when MLB stopped doing the annual Hall of Fame Game between two teams each year, but now they're doing an old-timers-type game. Terribly, I didn't hear about it until this, its third year. Since yesterday was Father's Day, I took my dad up to Cooperstown for the event. We parked on a street parallel to Main Street, and unknowingly entered basically the side yard of the museum, and there were the Hall of Famers in vehicles, rolling toward Main Street. We caught up to them and got some shots of Jim Rice (with the Goose). Some white trash woman in a Mets jersey yelled out at Goose, and Rice yelled back, Hey, you're a Mets fan. She responded with "doesn't matter, it's New York!" So classic, these assholes that root for two rivals. Might as well root for every single team and say, Doesn't matter, it's North America! But enough about that toothless piece of crap. 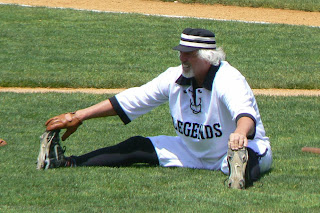 Of course I was most excited to see Bill Lee. He wore an old-time uni, brought his big old wooden bat, and wore... 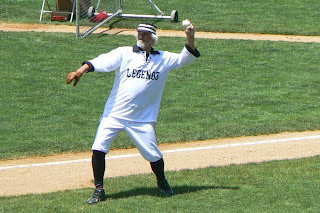 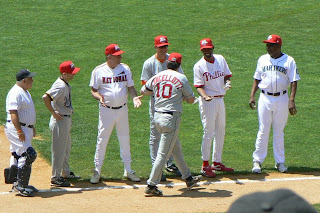 Rick Lancellotti was clearly wearing his OWN Red Sox jersey--see the arm band. We wondered which guys wore their own. Some were obviously new, some were clearly old. 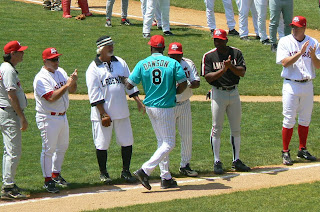 Why Andre Dawson wore a Marlins shirt, I don't know. You can also see Lee and Mike Timlin in this shot. 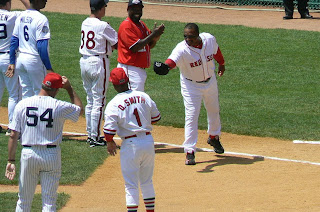 Jim Rice and Ozzie Smith. (Also, Rich Gossage, Dmitri Young, Rick Wise, and Willie Wilson.) There were seven Hall of Famers, and 20+ former major leaguers, plus a few stragglers in the game. Before the game there was a hitting contest, won by Dmitri Young, who was all about playing to the crowd. I also saw him play here at Doubleday Field in the 2005 Hall of Fame Game, when the Red Sox played the Tigers. 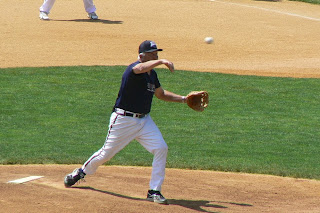 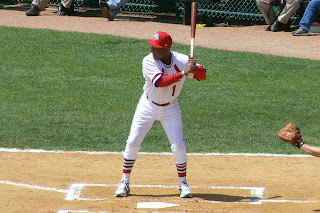 Ozzie Smith at the plate. 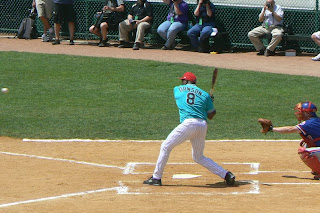 Our view of the field on a beautiful day in upstate New York. 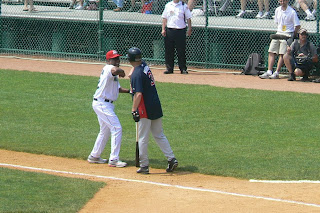 Dave Henderson Bash Brotherses Dale Murphy, who went untucked. (He also spent a huge chunk of the game signing autographs for the fans in the outfield bleachers.) 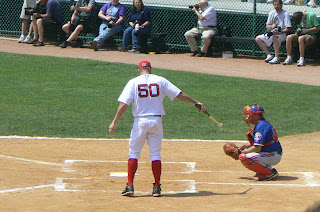 Mike Timlin played second base! Here he is batting. (Note the bat is upside down.) 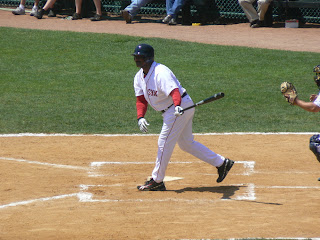 Poor Jimmy Rice can barely trot. He gave it his all though. 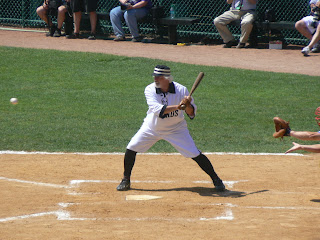 The Spaceman at the plate. 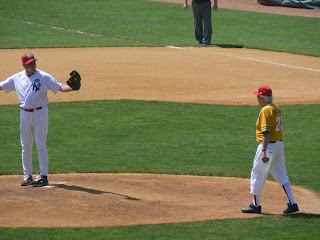 Goose was pissed when Dick Williams took him out. Williams managed both teams. 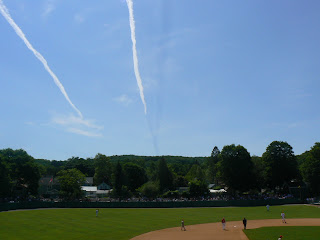 Sky over Doubleday Field (with those rare black contrails among the white ones). 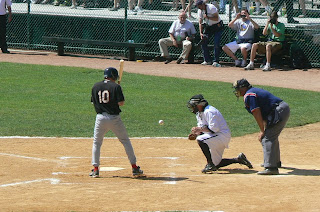 After starting the game in right field, Bill Lee took over as catcher! With just that little glove! And then, of course... 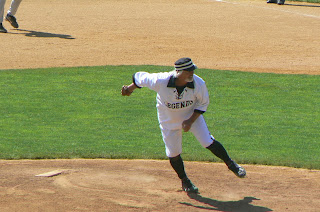 ...he took the mound. He finally threw the blooper pitch to Dmitri Young, who hit it over the fence. 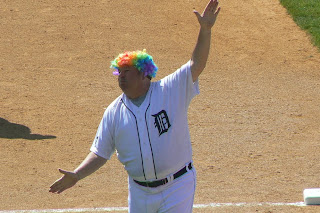 Lee was one team's "designated humorist" and this guy (Something Warren) was the other team's. As for the game, the team with Lee went up early, then went down 8-3 heading to the last inning. They rallied, and with one out, had the tying runs on base. Lee was the tying run at second, and there was a blooper over short. They guy went back and caught it, and doubled Bill off second to end the game. I guess Billy was thinking he'd score on the play to tie it if it dropped in, and was caught just a little too far off the bag. Between that and the dong he gave up, you could say he was the goat--but when you realize that results don't matter in games like this, you know he was the star of the game. Who else would pitch, catch, hit, and play the outfield, without a modern glove, all in one game?

I'll post videos from this day at a later date. It was really fun, with the exception of the PA announcer, who felt he needed to yell instead of talk, and give an annoying radio call of the game instead of shutting up.

Comments:
The Hawk ended his career with the Marlins, and has worked for them for the past decade, so I guess it was the easiest team for him to get equipment from quickly. That looks like one of his old batting practice pullovers.

Also, how old is Dick Williams? Never mind, just answered my own question, he's 82. I would have guessed closer to 90.

Reggie Sanders was his main competition in the "hitting contest" and he hasn't been retired that long. Doug Glanville played pretty recently, or maybe I'm thinking of his NYT column. There were definitely '90s guys... and there were two guys currently on a military team, and a couple other younger guys that we couldn't figure out.