Check out the size of that jimmy! Double-X rated! 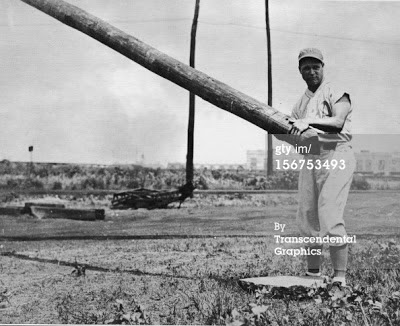 Jimmie Foxx is shown here with major wood in Ft. Myers, FL, then the winter home of the A's, around 1930. It almost looks like there's a giant home plate at his feet. I guess they were trying to show what a Beast he was, but don't larger versions of objects just make a human look smaller? Shouldn't they have given him a toothpick and a saucer?

Wait! Post not over. When trying to find the actual date, which Getty Images said was "around 1930," I noticed Corbis had the uncropped version. And it says it's from 1935. In August! In Philadelphia. So this isn't a spring training photo at all. But there's no way I'm taking it down. And I'm curious as to what/where that building is.

Where Have I Been?

How the hell didn't I hear about this earlier? A blogger who calls himself "Red Sox Fan in Nebraska," writes about baseball cards, and listens to heavy metal!

As a Red Sox fan who went to U. of Nebraska, collects baseball cards, and listens to...well, at least 80s metal, I should have found out about this much, much sooner. He's been blogging since 2010. This person has even cataloged his entire Red Sox card collection--all 14,000 of them. He did a post on former Nebraska Cornhuskers to play for the Red Sox (as I did, six years before that). I'm starting to wonder if his blog is written by me in the alternate universe where I stayed in Nebraska.

Speaking of places I once lived: Connecticut Red Sox license plates! Woohoo! Huge win for our side in the warzone. I'm pretty sure they've never done a Yanks plate there, at least I've never seen one. CT isn't too big on that stuff. I know we had the "preserve the Sound" plates with a lighthouse on it, but I can't think of any other alternate bumper uniforms offered by CT off the top of my head.

Left: Ducky Medwick of the Brooklyn Dodgers in Havana, February 28, 1942, about a week before my dad was born--he turns 71 today. Happy birthday, dad! (We all know he shares this birthday with my cousin Newi and Jim Rice, and it's my half-birthday too, as I turn 37.5 today.) Photo by William Vandivert/Time Life Pictures/Getty Images.

For some reason, redsox.com doesn't even mention it, but Ryan Westmoreland decided to retire from baseball at age 22. After the second brain surgery it didn't look too good, but I was holding out hope for the kid from Aquidneck Island, which is where I work, passing through his hometown every day. This article does a good job of summing up the sad tale of Westmoreland.

Update: Allan sent me the link to the mlb.com story. For whatever reason, redsox.com didn't deem it worthy enough to make the front page, which shows up to 14 recent stories. Unless I missed it, but I don't think I did since I saw stories older than that one still up there. 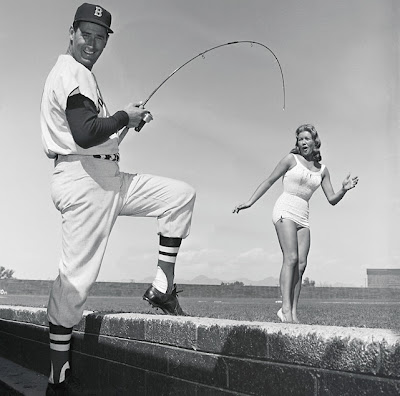 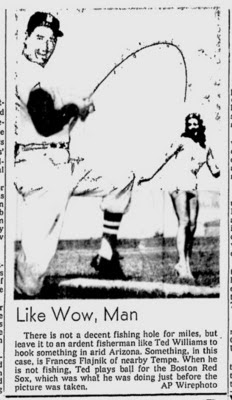 The Babe, in spring training in Jacksonville, his last with the Red Sox: 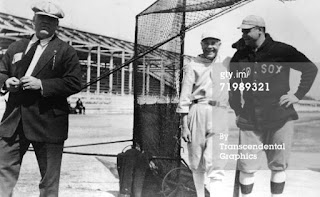 This Yankee stuff is getting fun. Grandy already out for a while, Cashman on crutches, now Horse Face out 8-10 weeks, and of course Youk should be out most of the year with his usual injuries. It's gonna be a Nunez-fest in The Bronx in '13.

Have you heard the latest Robinson Cano PED rumors? Callers to the FAN have been speculating on this for months, thinking that when his old buddy Melky got caught, he stopped taking the stuff and hence stopped hitting. But now some guy who's broken other PED stories is saying Cano's gonna get a suspension. Man, that would be sweet. Here's the link. I'm still waiting for similar news to come down on Jeter. As I've said before, I think this is the year!

Post title reference info: Some of my friends have been trying to popularize the phrase "ehhh, NO, Peg" for 15 years. It comes from a Simpsons episode. If you read this blog a lot, you've heard me throw it out there on occasion if the other party isn't gamin'. Naturally I've turned Cano's name into "Caaaa, NO, Peg." Hence, Cano Pegged. Genius, I know. And tell your friends about the phrase--I've been waiting too long for Eh No Peg to blow up!

Red Sox pitcher Drake Britton was so drunk while driving 111 mph the other night, he handed his debit card to the cop instead of his license. Time to get rid of this selfish piece of crap. We have enough Texans as it is.

Brian Cashman went skydiving yesterday (the kind where you've got a real skydiver on your back) and on his second jump, he broke his leg. That one's more hilarious than stupid, actually. Still, what's Cash gonna say next time one of the Yanks wants to do some life-risking for charity?

Speaking of flying through the air, I'm gonna be flying soon, first time since '04, as I've become terrified of it. I'd love to drive or take the train to Florida (I've done drives to Vegas and Key West the last two years) but I can't afford to take that much time off work. So they're supposedly gonna knock me out and put me on a plane, and I'm supposed to trust some texting pilot. The one thing that scares me more than flying is being drugged, so I don't know what to do. What if the place does crash, and I could have survived, but I couldn't get out in time because I was out cold from the drugs? And now I see there's gonna be all this wind. I'm already having panic attacks just thinking about it. And then what if I make it to Florida, but I'm stuck because I decide I'm never going on another plane again after the experience? Anyway, here's my will: Brian gets all my video tapes, he can sort them out and make cool compilations and stuff. Anything else just do whatever with. 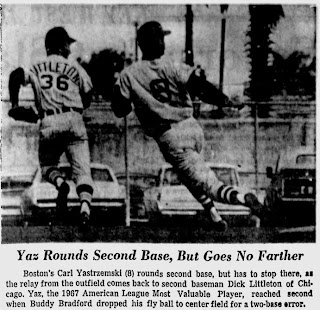 I love the way it looks like those cars are parked in the outfield....

As for this Dick Littleton character, much like Aunt Baby, he'd never make it. Played in the minors from '62-'69, mostly hitting in the mid-.200s. He racked up 82 walks in '66 for a .387 OBP (47 points higher than his slugging pct.) but nobody seemed to care. He was part of one of the most dramatic moments of that spring, though, as he went stumbling into home plate with the winning run against the Twins. In '68 he was cut at the end of the spring despite hitting nearly .300. Sent off to Hawaii. Only played one more season--but in that season he broke up a no-hitter with two outs in the ninth and his team went on to win in extras.

Here he is immortalized with Yaz. And some cars. Littleton is 71 and currently resides in....I don't know. 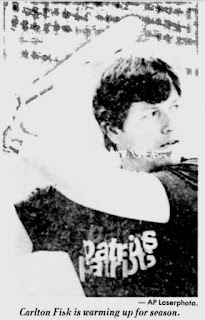 This is from when Fisk was starting with the other Sox. I just thought the lower-case, multiple patriots shirt was funny.

Not a bad day on Sunday. In the first at bat I saw Napoli take in a Red Sox uniform, he did exactly what he's done just about every other time I've seen him: massive dong. Center field, too, over the 420 marker. The Yanks didn't bring their A team, but Dempster gave up nothing at all. My boy Miller with an even bigger beard and longer hair than last year also was great, as were Tazawa and Uehara. Hanrahan was brining the heat--he gave up some runs, but it was a TYR, as the Yanks capitalized on Sutton playing third base like a Little Leaguer. Bailey did kinda crappy, and the last guy, Ruiz, gave up a solo dong in his inning. Yanks won 5-2, as their no-name pitching crew did a fine job.

On to those videos, not from today but the other night. This one here is classic Don/Jerry. Cracked me up.

And this one is also classic Don, but the negative kind. The kind where something clearly happens that we all see but him. The fact that he then started talking about the third base ump tells me he looked there while the rest of us were seeing the guy behind the fence picking up the ball....

Also, terrible job by Don today saying "Dustin" Romine instead of Austin. Most baseball fans have known about this Yankee prospect for a while now, and Red Sox fans especially know him as his dad played for our team! Don obviously hasn't committed that one to memory yet.

So Wupp On Your Feet

Today I found myself with a physical Projo and time to kill, so I did their Sunday crossword. (I'm a Will Shortz snob and don't usually do lesser puzzles but I'll take what I can get.) One clue was "Actress Shelley." I had F_B_R_S going down and wasn't sure about the across answers. I knew those spaces obviously had vowels, and I think I ended up just guessing on them, going with FIBERES or something.

Now flash forward to a few hours later, just now. I had just written to Allan Wood telling him how after a conversation we had about Lou Gramm (Allan has a book coming out for a publisher who's current big deal is Lou Gramm's book), I went to the car and the first song was a Lou Gramm song. Not Foreigner, but an actual solo Lou Gramm tune. So coincidences were in the air, or whatever. I then read an e-mail from my pal Kara, not my cousin Kara, about Silver Spoons. Which got me thinking about the recent sad news of Bonnie Franklin's death. Bonnie of course was on One Day at a Time, a show with yet another of my favorite theme songs. I watched it on YouTube and saw some no-name actor in the credits, but he looked funny and I considered doing a screen shot for the blog and maybe linking the theme in honor of Ms. Franklin. So I paused it. But first, I thought, I should listen tot he rest of the tune. The next thing I saw was this: 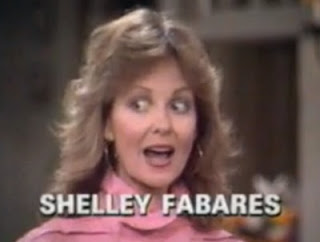 What are the odds?

Anyway, here's that theme, but I hate how the crucial beginning is cut off. Search around and watch a better version. 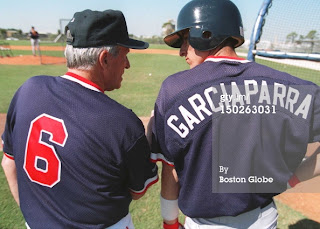