From late March, 1987, it's Rich Gedman and the Texas Con-Man suiting up to practice with the Spring Woods (TX) High School team during their spring holdouts. 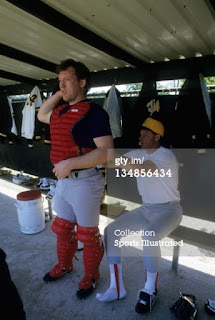 Tonight lots of stuff went right--Lester and Rubby were solid on the mound, Pedroia went 2 for 2, and Napoli made his debut and got a hit.

I missed the game, but Sunday afternoon against the Yanks will also be televised. Speaking of that, I saw that Joy of Sox linked to an article where some guy was complaining about NESN not showing us the games against the college teams, the first ones of the spring. And while I agree that in general, if the Red Sox are playing, I should be able to watch, I have to say, NESN does as good a job as any network of showing its team in the spring. Look up any other team's spring broadcast schedule, and you'll see what I mean. They also give us a live hour every night, starting well before the exhibition games even begin. What they do on the actual broadcasts, with the missing of pitches and whatnot, is another story. I grabbed some funny video from the other night which I may post soon if I get a second.

So we're 4-4 in the spring so far. The Yanks are in dead last in the AL, with the worst record of any team in baseball, at 1-7. Damn, I wish that counted. We all know the '92 Jets went 5-0 in the preseason but went 4-12 when it counted. Preseason records don't mean shit, but if the Yanks were 7-1 they'd be talking about how they have a general "winning way" that comes from years of class and extra class. But it is funny how all the Yankee people are talking about how different things are this year, with some pinstriped-glasses wearers saying how they're just like the '96 team since they don't have a lot of big name players and therefore will automatically be awesome. Even Suzyn said, "it's not like the teams we've gotten used to in the 90s." Suzie's only 14 years behind!

My criteria for these "past spring training moment" shots: not regular season, or has palm trees visible. Below is Ty Cobb batting in Cuba after the 1910 season. 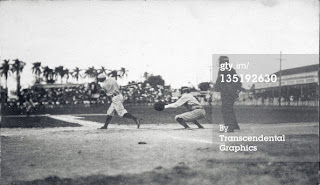 Cobb supposedly went on the trip (the Athletics and Tigers both went) just to make money, and after playing against black players--three of whom out-hit him on the Cuba trip--he was said to have vowed to never play against them again. What an a-hole!

I don't know what to make of this cartoon from the Portsmouth Daily Times, from when the American teams were playing against the Cuban teams, 11/28/1910: 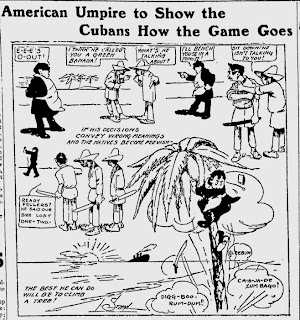 The Red Sox rocked the Pirates today, and play tonight on NESN at 7:ish.

I think somebody needs to be this guy I invented. Call him Mr. Finesse since I haven't thought of a better name yet. The guy is an NBA superstar, tall enough to easily dunk. But his trademark move is to not dunk. So he's all alone on a fast break, flies up toward the rim, and with a flourish, drops the ball silently through the twine for a deuce. He could do windmills, under the leg, tomahawk, but always ending with his hands stopping inches shy of the rim as he lets the ball fall in, maybe even pulling back his hands quickly.

Now one variation of this guy could be that once per victory, if he's in position to dunk, and he feels his team has the game in hand, or that two more points would be the nail in the coffin, he slams it home with authority. Kind of like how it's cooler when you tell a whole story without cursing save for one big f-bomb in the final line. Maybe he could go so far as to only do it on a playoff-series clinching win. Oh, it would be so sweet. Everyone loving Mr. Finesse and his faux-jams, but still waiting for that one loud rim-rocker that signifies you ain't comin' back and sends everybody into a frenzy. Maybe at that point MF becomes his alter-ego, MoFo.

Can someone please do this? 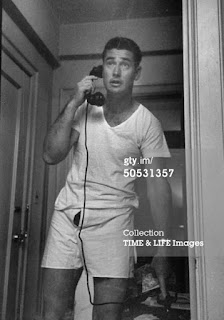 Two nights ago, Craig Ferguson came up with a name for the male version of a nip-slip: the ball-fall. I sent the above picture to Chan (a big Craig fan) with the subject line: "Teddy Ball Fall?"

Brooks Was Here And So Were The Red Sox

Jenny Dell just gave the good news--Will Middlebrooks is okay. Earlier in this game, he took a weird swing and had to leave the game, and it appeared he'd re-injured that wrist. But apparently not.

So I'm sticking with my prediction. That I hadn't told you yet. Will Middlebrooks for AL MVP! 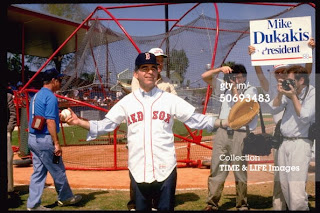 Francesa was live from Tampa today, and had great things to say about the Red Sox' facilities in Ft. Myers, where he stopped the day before. He said the Yanks' place is great, but Fenway South topped it. I had to laugh because he said his Yankee-fan kids loved the souvenirs and clothes so much, they actually bought them. So they'll be wearing their new Red Sox clothes--but won't be allowed to leave the house with them on.

Oddly enough I'll be in Florida and will see a Sox spring training game, but not in Ft. Myers. I think my mom is gonna check the place out, though.

Speaking of the "little Fenway," which I never was a fan of as a concept as you know, one of the reasons they say they did it is so the players can get practice on a field similar to the one they'll play their regular season home games on. But if this is the case, why not play all the games at night, in the home whites, and with fake snow/rain/cold pumped in to simulate April weather in Boston? Why is the home dugout on the third base side? Why is there a big hole in the Green Monster? Why is it even green--does the paint color affect the caroms? And I was really gonna wow you with "why isn't the field situated the same way as Fenway on the map?" but they actually did do that one. Damn! Anyway, as I've said a million times, there's only one Fenway, and it was unique because it didn't try to copy anything, let alone be a replica of anything. It's a cool idea for your back yard, but why make Fenway for a team and fans who already have one?

Bonus note #2: Some of you may be wondering how I listen to the FAN if I'm in Providence these days. I don't use the Internet, though I obviously could--it comes in perfectly fine in my car! As does WCBS 880. My friend joked that I'm "grandfathered in"--no matter where I live, I'll always be able to pick up the NY radio stations I grew up with in my car.

Speaking of the FAN, yes, I'm still boycotting the Boston sports stations, since last July when I did the anti-media weekend. Also never check the Boston papers and similar bullshit sites online. So much better for my health.

Tidy Cats cat litter. Status: Still going strong. Remember I told you about their anti-Red Sox ad? I've switched to Fresh Step and/or WholeCare and life is beautiful. Life in terms of cat shit, that is.

Bubble Wrap. Status: Don't go out of my way for it. Remember how they were all pro-Jeter? Well, I don't buy packing materials too often, but if I get some soon, and if I think of it, and there's another option, I'll go with whatever that is.

Meat. Status: Still going strong. I became a vegetarian January 1, 2000 and haven't looked back. Still thinking of going vegan but haven't taken that step yet. But I've felt healthier and better about critters, cute and non-cute alike, not having to die for my taste buds.

And to wrap this whole thing up, I was gonna make a joke yesterday about how the Yanks have the Grandy injury plus Youk's impending one. But he beat me to it! Scratched from the lineup today with some form of Youkitis.

Random Past Spring Training Moment of the Day! 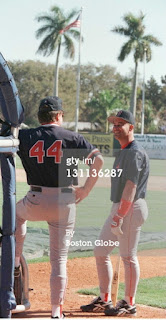 Our knucklehead beat the Jays' knucklehead today. I'm sure I've said this before, but having a guy named Steven Wright in the organization is pure chocolatey gold. You know I'm gonna break out a Wright joke every time I mention him. Know how when you put a stick in the water it looks like it's bent but it really isn't? That's why I don't take baths.

I see the Yanks have a new slogan. It's just as Yankified as you might expect: "A Timeless Legacy." Speaking of slime disguised as class, I loved it when David Price said going to the Yanks wouldn't be worth shaving his beard. Too bad he ended up backtracking on the statement. I listened to Sweeney Murti (who's normally pretty good as the FAN's Yank-reporter) saying how it's stupid to effectively eliminate the Yanks as a suitor, money-wise, and how it's "silly" to think the beard is more important than money. And the hosts laughingly agreed. So apparently not letting your employees have facial hair in 2013 is totally normal, but wanting to be yourself in a way that has no effect on your job performance is silly. What's really silly is how if you hang around the Yankees too much you start believing their bullshit.

Highest Price Ever Requested For A Pac-Men Record

Check it out, somebody's selling a record by my old band on ebay. That's happened before, but this guy in California seems to think it's worth 40 bucks, despite the fact that it doesn't even work. "Too scratched to play, too cool to throw away," he says. I guess that's...a compliment? Either way, if you want a copy, I'll be happy to send you one (that does play, and has a cover) for way, way, way less than $40.

Speaking of sending you people stuff, I have yet to send out the prizes from the Super B0wl contest. But I'll do that at some point before next year's game. (But hopefully this week.)

Lester was good today in his first game. We beat the Cards. Next televised game is Wednesday night.

I actually heard the Granderson hit-by-pitch in via Sterling in the car earlier, and now they're saying it's a fractured forearm and he'll be out ten weeks. That's mid-May to you and me, kids.

Baseball Now. Provided You're Reading This Before, Say, 4 PM. On Sunday.

Sox not on radio or TV, but follow the action here. We jumped out to an early lead, 2-0 in the second.