Yes it happened and this time I didn't miss it. Details to follow later.

Got through somewhere around 10:15. No Sox Pax had upper bleacher left* and I didn't want to pay a minimum of $200 plus fees for four games, of which I'd only care about one, so I made a lil' Sox Pack of my own through indie game tickets and got the exact games I wanted for a sweet price.

I see that as of now, 10:28, you COULD still get two together for opening day, in bad RF boxes. It always stinks when you're staring at a chance to buy opening day, but, again, I'm not made of money--when it's the Yanks or a flag-raising on Opening Day, or I can get the $12 seats, I'll do it in a heartbeat. If not, it's not a big deal for me. The game I HAVE to be at this year is the 100th anniversary one. Hopefully I get lucky with a twist o' skill when the time comes for that one.

This year's technical issue: Once I selected my games (by the way, after you select tix for one game, it will take you to the name/address info page--if you want multiple games, don't fill this out yet, just click "schedule" at the top and keep selecting for all the games you want, THEN click finish or whatever and fill out your info) and got to the credit card info area, I realized I had my old card in there as a saved card. The same card, just from before it expired. I just got the new version of the card in the mail this week. It wouldn't work when I typed my new 3-digit code for the expired version of the card. So I entered the new card in the "add new card" slot--only it gave me an error message saying "this card already exists." Well, yeah, the same number exists, because it's the new version of the same card! So basically there was NO WAY to use that card (without going back to my mlb.com account and resetting the info--not an option with the clock running out on my tickets, and even if I did do it in time, that page with my tix on it wouldn't update, I wouldn't think.). So I whipped out my OTHER credit card, filled in the info under "add new card," and thank Gedman that one worked. Case for emergency credit card!


*do they even sell the Sox Pax at the upper bleacher price? I can't remember....

The T's are on the schedule! The first sign of spring...while I'm watching Frosty the Snowman.

Did some unfURLing and found out that the Big Sale, aka the summer game sale, will be January 28th at 10 a.m.*. And as for the September games, those will go on sale this Sunday at 10 a.m.* (They always go on sale later in the day on Xmas @ Fenway day, or the next day, with an announcement acting like it was because of high demand--it's like an encore: you know the band's gonna do it anyway, but they make you go through the cheering and stomping for effect.)

Now if only I could find the secret location of the Yard Sale starting time (for non-Xmas winners) info!


*This is just what their ticketing system is showing now; don't blame me if they change dates/times.

Here are your weekday afternoon home games for 2012:

Of the games above, the ones without a notation are just getaway days, but I'm wondering why the May 15th game only went back to 4:05. They didn't need a day game there, as neither team is travelling very far for the next night's game. Then again, they only pushed the game up by three hours. It's like a half-getaway day.

Having all the times set now is a good idea. Last year they tried to give us an early heads-up by putting either "day" or "night" on the schedule before they knew the times. Which only led to extra clutter on the already ad-ridden schedule when they forgot to remove the day/night notations for some games. One is still there! August 4th. 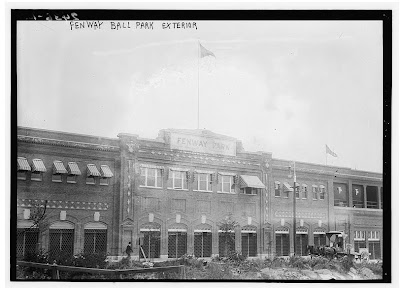 Old pic of Fenway Park, from the horse-pulled wagon days. I love the fact that there weren't any buildings across the street yet, so you get a wider view that you can't get today. But also, check out the far right, top floor. You can see two curtains with the "FP" logo on them. I noticed these on Mothers' Day 2010, and two pictures of them appear in my photo gallery from that day. Obviously they're not the exact same curtains, but at some point somebody decided to put that same logo on curtains in that spot. (Or they've always had curtains in this spot, always with an FP logo on them. I think these curtains are usually open--either that or I just never looked at that spot before 2010.)

(While searching my own blog for "FP," I came across another post where I suggested the Futures doubleheader should be one game of minor leaguers, and one old-timers' game. Great idea, past Me! I should have suggested this to the team now that they're doing special things for the 100th anniversary and taking ideas from fans, but it's probably too late now. Or maybe they ARE doing this and that's why the schedule is only showing ONE minor league game on August 18th. If that's true, somebody stole my idea. But it would be worth it, since we never get old-timers' games at Fenway anymore.)

Here's the press release describing some of the stuff the Red Sox will do for Fenway's 100th birthday this year. (It was released this morning despite the "11:13 PM" at the top.) Some notable things:

Four throwback days, including May 2 against the A's.

A 256-page coffee table book with some never-seen photos.

A "living museum" on display at Fenway.

An "open house" on April 19th, the eve of the 100th birthday, where fans can go to the dugout tunnel and clubhouse.

World's biggest toast before the game on April 20th vs. the Yanks.

They say they will announce more. As for Xmas @ Fenway--I didn't win. So I remain a lifetime 0-fer on that front. Hopefully some of you made the cut. Oh well, I'll be getting my tickets online that day and then hopefully being there when they open the doors to everybody for the Yard Sale, should they do it that way again. Oh, and if you wanna see Pujols at Fenway this year, the Angels come in for one series in late August.

Waiting By The Inbox

Xmas @ Fenway winners were supposed to be contacted "on or about" Wednesday. We're now an hour into Thursday. So either I'm a loser...or they're late (in which case I could still be a loser).

Was watching a video about the new Marlins ballpark. They hyped that they'd be playing the Cubs, Phillies, and Red Sox. Since they used our old logo, maybe we'll just have to show up at their old ballpark!

As we enter year four of the new logo, we've still got plenty of holdouts. But the most prominent one is the Boston Herald. There it is, right on top of their Red Sox page.

So once again, for people who somehow missed it despite that they work for Major League Baseball and/or the Red Sox and/or media outlets who cover the Red Sox, here's the old logo (retired 2008):

and the new, that's not even that new anymore: 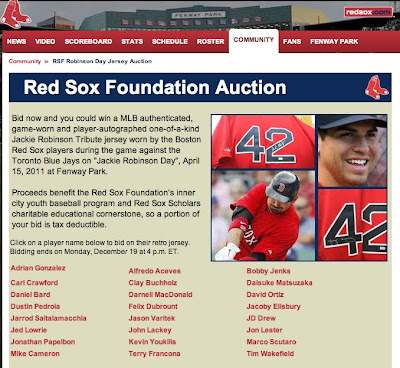 Remember when the Red Sox auctioned off those retro jerseys after the Cubs series in June? Yeah, when they forgot how to spell their own players' names. I posted about it at the time.

Well now they've got a new auction. And Error Mania continues! See the picture at left and follow along:

They've figured out "Gonzalez" and "Buchholz," but they're still going with "MacDonald" instead of "McDonald." And "Doubront"? They say "Dubrount." (And just like in June, when you click each name, it takes you to a page where the name is also spelled the wrong way.) So they score a 22 out of 24 this time, not bad!

Bonus errors! They forgot to change "retro jersey" to "Jackie Robinson jersey" right above the player names. Way to use the old copy and change the relevant info, only to accidentally leave some old info in. Classic mistake. And "a MLB"? I'd go with "an MLB" there, but I suppose you could argue the reader will read it as "a Major League Baseball," or, less likely, "a muhlb."

Note to people who don't care: I obviously do care, so we're just gonna have to live with each other's quirks. You're welcome to point out my mistakes just to spite me.

The Boston press can make or break you. No matter what you say, they're gonna write it up like they want. 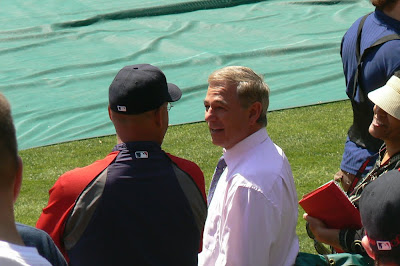 Bobby: "Watch out for these guys, Tito, they just might get a big lead, get complacent, and blow the whole thing, and everyone will blame it on you, and you'll get fired."

Tito: "Yeah sure, Bobby. And who they gonna replace me with, YOU? You're on drugs."


So my Pepitone theory hasn't gained much traction. I commented on Martone's article (he specifically had asked the public for help) but I see no response yet. Couldn't find his e-mail address to write to him personally either. This was another one of those cases where I thought I'd be handed the key to the Internet for my work, but instead almost nobody cared. Oh well, it'll even out the next time I offhandedly post a video of my cat pooping or something and it gets 10 million hits. But I'm not giving up on Pepitone yet--hopefully I at least get a response from Martone.