tomàs saraceno: on space time foam from designboom on Vimeo. 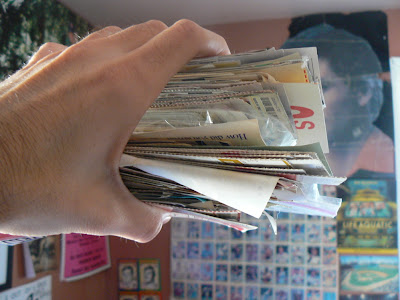 I've been saving every ticket stub to every event I've gone to since...always, pretty much. Games, concerts, and movies. The above picture* is a good chunk of them, but doesn't include a lot of recent events or the crappy print-at-home tickets. I wonder what I should do with these. When Zack Hample unveiled his "business card bathroom," I was inspired to do something similar with my tickets, like maybe plaster the ceiling of my "office" which you see in the picture above. It would nicely match the existing decor of an uncut 1982 baseball card sheet, a Saturday Night Fever poster I found in an abandoned crack house in Brewster, New York in 1991, the old Fenway day/night postcards from the 70s, a The Life Aquatic magazine ad, a knock-off Nirvana concert poster, a picture of me swinging on a vine in the El Yunque rain forest in Puerto Rico when I was 13, et freakin' al.

But I don't want the backs to get messed up, so maybe I'll make a gigantic album out of them using those plastic sheets. Or maybe I could start a "ticket of the week" blog. But that would take ten years or something. I might need to do one a day. Your suggestions are welcome.

*There's no air between those tickets. That's a tight stack representing about the most I could hold in one hand. So....

Xmas @ Fenway is Saturday, December 1st. Register now. April and May (and September later in the day even though they always make it a big secret) games will be on sale that day at 10 a.m. Then we'll see how they play the Yard Sale. Hopefully I figure it out and get to go.

And now, my yearly fun-making of the names of the Sox Pax. The usual suspects are back, of course: TGIF, Saturday Special, Sunday Best, and Opening Day. The packs with a Yankee game in them have some familiar names, the Bambino, Empire, Bomber, and Pinstripe Pax. The you've got a Phillies one called Phightin', so they did a little brainstorming I guess. And two have a Rockies game: Rocky and Mile High. An interesting new idea (unless I missed it last year) is how the Holiday Pack gives you Pats' Day, Memorial Day, Independence Day, and Labor Day. I feel like no one will buy this one, though, because you're gonna have plans already for a few of those days.

What's This Awesome New World I Woke Up To This Morning?

As a L.E.F.T.Y., I've always said that if I suddenly became a multi-millionaire, I'd give huge chunks to charity and I'd be perfectly fine with paying lots and lots of taxes as an overall way of helping the country and the people in it. If I had 10 million dollars and you told me I had to give back 9 million, well, I'd still have a million more than what I started with. In other words, if given the chance, I would walk the walk.

The point is, if the people with unholy amounts of money would give a little bit more, we could solve a lot of problems. (Instead they only want more more more while at the same time convincing half the country, many of whom are dirt-poor, to vote for their interests.)

Well, all of a sudden, a few beams of light.

An offshoot of Occupy Wall Street* called Strike Debt is helping people erase their debts. There will be a telethon tonight at 8:00 eastern. Watch it on the Rolling Jubilee site. People helping people, who would have thought?

Then I see this article about a group of millionaires who are saying, essentially, "go ahead and take more of our money." Exactly what I would do. At some point the mission statement of the USA went from "be excellent to each other" to "try to get as much as you can for yourself and screw everybody else. Also, money defines success."

So there are some good things happening, and this is right after a Democrat has been re-elected, meaning people don't just scream for change when Repubs are in control. Which is a good sign. We should never relax.


*Can we please not judge this new group on how they dress this time? Thanks!

I just found out that Jerry Christian died this past May. You probably don't know him. But you might recognize the name if Jaws is one of your all-time favorite movies. Jerry was the mythical outfielder in the beach scene where you hear a baseball game coming from a radio. He was a sound man, and obviously Spielberg decided to pay tribute to him by using his name in the fake broadcast. As far as I know, I was the one who "discovered" this. See the post I wrote about it in 2008.

Anyway, I'm sure he did some fine sound work, but all always remember him for his fine running catch.

Years ago, I wrote something about the possibility of women playing Major League Baseball one day, and I remember BSM responded by saying a woman has never been good enough to play. He wasn't saying it from a mean-spirited position, he was just saying what appeared to be the truth. And I responded by saying how the point is that we'll never know as long as females keep being pushed away from the sport. If they haven't been pressured out of it by high school, they're sent off to the anonymous world of softball.

Now there's this 9-year old girl named Sam Gordon tearing up the Pee-Wee football "scene," and Dave Zirin has written a nice article about it. He says what I said, that females are physically weaker in general, but they don't have to be. And they're better than makes when it comes to endurance. There's also the bigger picture of females being "allowed" into male sports. It's 2012, I think it's time to just let it happen, Sexist America.

(Link to article found at wmtc)

Man, these kids with their cameras, I tell ya....

Way Better Than What Your Friends Are Doing

Wow, I hadn't updated my most prized possession, the Photo Galleries section, since May. Terrible job, me. So move your eyes to the right and relive the power and the glory of mid-to-late 2012. It's all there: hitting on the field at Fenway; Zack Hample almost trying to catch a ball dropped from a helicopter; the PawSox honored in beautiful Pawtucket, RI; chillin' with a statue of Chris Columbus in the living room; Jose Canseco playing in an independent league; Ryan at Wrigley, and more!

And if you're looking at a handheld thingy, you probably have to scroll to the bottom and click on "view web version" or something to see the links section on the right.

1. Don't worry, mom, he's not replacing Salty, just "complementing" him. (Unless they really want to keep Lavarnway and trade Salty. I guess we'll find out.)

2. He's been on the Red Sox before! For just a few games in 2008. He played in that doubleheader on the day Johnny Pesky's number was retired. I checked my pics from game 2, and it turns out I took a picture of his crazy mask, and you can also see his blurry face in one of the celebration shots.

3. He was once Bronson Arroyo's personal catcher.

4. He hit his first home run off of Mark Grace. If you're a casual enough fan where you don't know why that's noteworthy, yet rabid enough to be reading trivia about David Ross on a Red Sox blog, well, Mark Grace wasn't a pitcher.

6. He was once traded for a guy with "maniak" in his name.

7. He went to the same college as Chan.

"It Isn't Good For The Ticker"

Nebraska with another crazy comeback win! Last week I was already at the stage of "there's no way they do this again," and they did it. And now they do it again, against Sandusky State. Fourth double-digit comeback win of the year. And again, we're not supposed to be the type of team that can win if we get behind. Clearly that has been proven wrong. And our star back Rex Burkhead's been injured. That dude's gonna be an NFL supa-fly star for the next ten years, I think.

Anyway, it kinda stinks that last year I bought tickets to the Big Ten champ. game in Indy before the season, only to have my team not make it, and this year I chose not to get them, and we're two wins away from being there. May just have to drive up and scalp a scalper at his own scalping game. You know Gumby? He lives in Dayton and Chan and I have yet to see his new house so we could parlay this into a visit, as was the plan last year when I bought and then ate three expensive tickets.

Anyway Part Two, why aren't the Husker comebacks a bigger national story? Tebow made all those comebacks last year and people cared, but maybe it was because of the Jesus thing. Or maybe we need one more before people start to notice, meaning Yahoo Front Page people, as opposed to just sports fans.