Here's some video and pics from Friday afternoon. It was tropical-warm out, a little spitty, mist covering the shoreline--we did NOT wanna go back to work. The waves slowly rolled in and the surfers--the only people in the water--couldn't do much with them. Like trying to surf a tsunami. Enjoy. 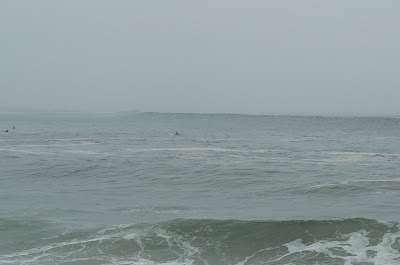 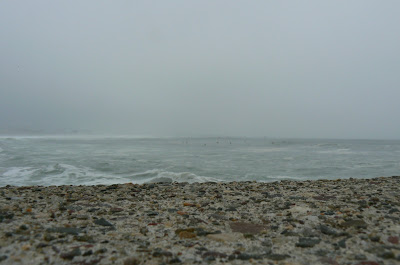 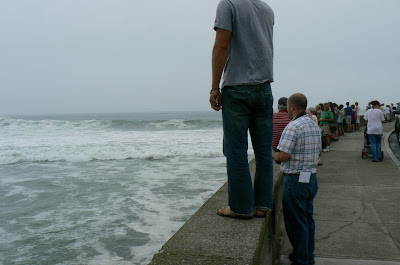 Hurricane Earl was the perfect storm, for me. Great waves, no damage. It didn't even rain that much, aside from a few downpours.

Well, we only lost a half game today. To one of the teams. Yoisch.

Got this from mlb:


"In regards to your concern, as of the moment, the only In-Market teams
subscription that we offer are listed below:


In case anyone was wondering (since that article from 2009 about in-market mlb.tv acted like most teams would have this by now).

I think our best chance was in the 5th, when Danks started losing his control, but Drew and Beltre came out hackin' and the rally ended. Shitty game. Meanwhile, the Yanks haven't lost since my little update on how we were playing better than them, or since I theorized that they were the "team to catch." I'm goin' to the beach.

Article by the guy who wrote the Happy Days where Fonzie jumped the shark, defending his episode.

Isn't it funny how that moment was the one the originators of the term chose, when on the same series, later in the same season, you had Fonzie and the crew meeting Mork from Ork? So what I'm saying is, I think Happy Days "Mork-met" when they met Mork....

Battle de los Sox tonight, I assume they won't play but I could be wrong.

Perfect spot outside the Mexican place. Perfect weather. Sweet outdoor movie (The Usual Suspects). We got in the car and literally heard just the final pitch, "and this one's over."

By the way, this was only my second time seeing Usual Suspects all the way through, and I couldn't help notice three references to Splash:

At beginning of US, it says "last night" on the screen to tell you when it's taking place. S did something similar, showing "this morning."

Then you had the mention of Cape Cod inside a NYC taxi in both movies.

Then toward the end of US, Nick Tortelli says there's a system to the clutter on his desk, just as Tom Hanks does in Splash.

We're also talking about two movies in which (spoiler alert) a mythical character turns out to be real. And both have boats. And all the letters in the word Splash can be found in The Usual Suspects! I'm convinced something's going on here...I have to solve the mystery!

Just read an article about alcohol, and it had this line:

"...nondrinkers show greater signs of depression than those who allow themselves to join the party."

Apparently by not drinking, I'm "not allowing myself to join the party."

Maybe the asshead was drunk when they wrote it.

Sox against the team once managed by Hurricane Earl, 7:05.

The sign Lester was having a bad night was not that a pitch slipped out of his hand and went to the backstop with a man on third, but that he didn't even cover the plate at first. But he settled down and kept us in it! And just when it looked like he'd take the L, a six-run 7th inning for us. And if you had any doubt that our guys are still trying, I hope you saw the scene in our dugout. These guys wanna win. So we got that going for us.

Yanks and Rays won. So we stay [big number] games out.

The stretching woman at Camden is pretty amusing. She's no "umpire guys," but she seems to have great passion for her schtick.

New England f0rd dealers, still the official car of the Boston Red Sox. Still using the old logo. Now in September. Of the new logo's second year. Let's see if they make it all the way to 2011!

All of this seems a little less important what with Jennifer Jason Leigh holding the Cash Cab hostage or whatever, but...

If this guy can live, the Red Sox can live.

Is it bad that I'm trying to figure out if Hurricane Earl can somehow cause the Red Sox to make the playoffs?

Tonight I was at the PawSox game so I missed the Balty Shitshow. I see Scutaro still isn't Gonzalez. Since that great Friday, we've lost every game, the Yanks have won every game, and the Rays have won all but one. Terrible. If it's any consolation*...the PawSox won! If I heard correctly, tomorrow they try to tie a team record with their 9th consecutive win.

Nice job by Quinn in our contest predicting Lowrie would score the last run of the month. He should get some sort of bonus for that run coming on a home run. The September version of the contest will be more fun--more player options, more time, and a sooner deadline for extra drama.

We're like a million games out, but the Yanks don't have a lot of pitching and we're playing the Orioles. So they're the ones we're shooting for...it can happen.

Contest a few posts down. Enter before tonight's game starts.

Crappy Night Without Even Playing

Lost a half game to both teams on our off night. Nice touch.

Did you know the Orioles just got eliminated from playoff contention? Or that Pawtucket is 20 games out? Or that I can hear individual Indians fans making various bird calls in the 11th inning of the game I'm watching on WGN?

Haven't had a c0ntest in a while! Okay, this one's called "Last Run of the Month." Tell me which Red Sox player will score the last run of August. It has to be before midnight eastern on the 31st. Post your guess in comments, deadline is 7:05 Tuesday night. (Also note that the last run of August may have already been scored--do what you will with that info.) W1nner gets one t1cket to next Sunday's game which may feature Manny in a White Sox uniform. (If you win, please contact me with your address as soon as possible so I have time to send your prize out on Wednesday.) [Hey--if you can't go to that game, just enter anyway! Don't worry about it.]

I'm positive 80-90 percent of the time. Maybe more. But an early lead for Lackey? Count on him to appear to try really hard and get pissed when he does just enough to give the other team the win. If this guy was a hitter, I'd be saying the term "warning track power" a lot.

So shitty that all goes right on Friday, we win, other two lose, and all goes wrong on both Saturday and Sunday. We should not have let that happen. Should have gotten a much bigger lead for Dumb-bag tonight.

What a dope Morgan is. Devils are one out away, and of course their fans are cheering. Morgan decides to say that the people who came to tonight's game (as opposed to the 13,000 no-shows) are Rays fans. Cut to a shot of the crowd that clearly shows Sox fans, and Joe has to amend by saying there are a few Sox fans but it's a Rays crowd. Our fans had such a great showing down there this weekend--and Joe said earlier he watched the first two games. It was clearly a case where he got caught up in the cheering crowd and just said something untrue. (Maybe he also should have pointed out that a huge part of the Tampa crowd are dirty Yankee fans who now can where Rays jerseys when they play the Red Sox.)

I read about Zack Hample's trip to the Rawling's factory in Costa Rica and it got me thinking about the people that make baseballs for Major League Baseball. I did some research and it's what you might expect: slave labor. It's bad enough that animal carcasses are deemed necessary to sports like baseball, but until we solve that problem, why can't something be done about the ball-makers?

I really think it's up to the players on this one. These multi-millionaires have influence, and they should stand up for the slaves that make the balls that led to their extreme wealth. Wait, make that the owners. And the league. And everybody else involved. The corporation as a whole needs to do something. (I also hope Zack brings this stuff up when his book about the baseball itself comes out.)

This article is a good place to start if you want to look into this. If you're a baseball fan, hopefully you do.