I'm pissed some more. The other day I saw a press release on redsox.com that said "trophies to visit Maine this weekend." I took this to mean that as the trophies go around New England and beyond, the "releases" section would give us advanced notice. Then today on an ad that popped up in a sent e-mail, I see an article about how fans from far and wide gathered today in Providence (where I live) to see the trophies. Double-you tee fuck?? No release about it.

I have seen the trophies, and I worked all day anyway, but I'm still allowed to be pissed on principle. (Let me guess, all the people on facebook knew about this because they follow the team just to be like their fake friends, while real fans like me who actively seek out the info at the team's official site miss out.) 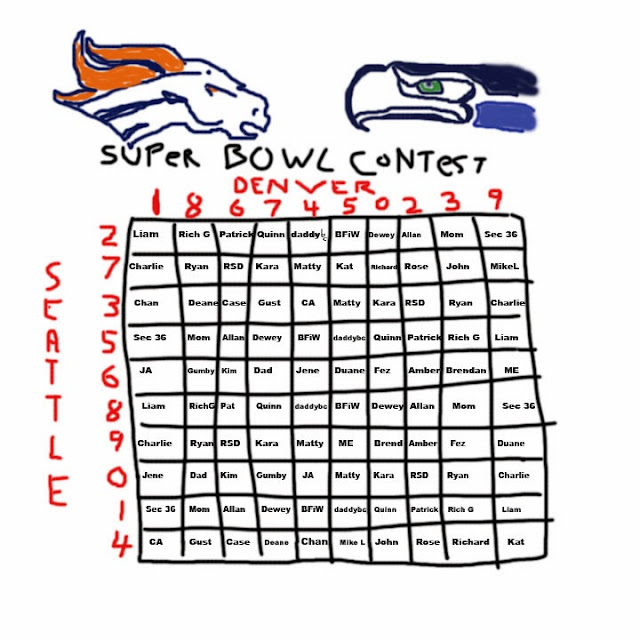 There it is. If you entered by the early-bird deadline, you have 4 squares. If you didn't, you have 2. I took the 15 early birds and entered them from top-left, then did 10 nons, including myself, then repeated that over and over, reversing the order each time. Then I went to random.org and put in 0 through 9, and kept entering until they'd all come up, putting them onto the grid left to right for the Broncos, and then a whole new set top to bottom for the Seahawks. I didn't film any of this this year because nobody watches, and the only way I could really cheat is if I knew the score of the game ahead of time anyway.

The rules, in case you have no idea what's going on but are still in this contest:

Let's say you are, hmmm, my cousin Kara, because she seems to have sprinkled some magic powder onto the grid and ended up with four of the best combos a girl could ever ask for. You find your name. You see a 0 at the top (Denver), and a 3 to the left (Seattle). So if the score is Seattle 3, Denver 0 after the first quarter, you'd win the first quarter prize. But it's all about the final digit of the score. So if it's Denver 10, Seattle 3, or Seattle 33, Denver 20, after any given quarter, you'd win that quarter's prize. Then you'd look at your other three boxes and say, Holy shit I have some good ones, e.g. 7-7, 0-0, and 9-7. Incredible.

Notes: If you entered but I forgot to put you in, let me know. I can always give you my own boxes or the boxes of some of the many people I entered without telling them about it. But I hope I got everybody in there.

"Dad" is my dad, while "daddybc" is reader daddybcat. "RSD" = RedSoxDiehard. Casey, the Liam you see is a reader, not your son Liam, despite my earlier joke about potentially putting people's children in to fill up space.

If you can't read this weirdly made grid with small type, ask me and I'll just tell you what numbers you have.

I'm pissed. I decided to go to Opening Day in Baltimore, to see the first Red Sox game of 2014. Plans were made with our Baltimore friends, days off were taken. I knew I wasn't gonna waltz into the on-sale and score front row seats at Camden Yards, but I did assume I'd have a chance to buy tickets for this event, and I had planned to get up early tomorrow and do my thing. Nope:

I actually forgot this thing was on Y-Tube. Movie I made years ago, about Brian eating pizza for the first time in six months while our band was on tour in Seattle in 2001. I wonder if the quality would improve if I re-upload it. It's crystal clear in its original format, but looks almost like VHS now. So give it a try--at least wait till it gets to the fun surprise at the 3:00 mark.

Last chance to get into the Soupy Bowl contest. Friday at 11:59 p.m. will be the deceased line. Then I'll put the grid up so you'll know your numbers. If you're not in yet, let me know that you want said in. It's free. Also, I see now it's gonna be almost 50 degrees on Super Sunday. And you hear people say "they dodged a bullet," which still confuses me, since if you decide to have a cold-weather game, I'd assume you'd want cold weather. I think the bullet is hitting the NFL right in the heart. Terrible job, weather.

I was just thinking today of how that Papi grand slam (with the cop and the legs) was possibly my all-time favorite Fenway moment that I witnessed in person. Here's the aftermath once again:

A few other things: Remy will return to the booth. Which is his call, of course, as long as NESN wants him. I just think that if anybody out there happens to be the type of person who sends cookies or flowers or prayers to people going through tough times, first of all, nice job by you, and second of all, should you do that for the Remys, I hope you do the same or more for the family of the woman who was murdered.

I see S. Colbert has adopted the Superb Owl phrase. Beat ya by three weeks, Colbert writers! If you stole it, just send Red Sox tickets as payment. Box seats. Note: I see now that I wasn't the first to come up with this term. Still, I'll just assume they stole it from me specifically.

Still time to get into my Super Contest! Might as well get in--it's free, you don't even have to watch the game, and the top prize could be tens of millions of dollars. Or gallons of honey. Or live human babies who may grow up to be president, making you First Mom or First Dad. You really have no idea yet, so you might as well hop on board. Comment here or e-mail me or something.

Still time to get in my Souper Bowl contest. Just comment that you're in or e-mail or send me a message through ESP. (ESP entries will not be honored.)

Hey, do you like football? And if so, aren't you excited to finally have a cold-weather Super B0wl? It's every kid's dream. Incredibly, though, I've heard of people not liking this idea, and there's even talk that the NFL will change the time/date should there be the very thing that adds sugar plums* to the dream, a storm. So my question to you is, if you are anti-cold-weather SB, please write in with your reasons why, but first ask yourself if you're thinking too hard.


*Assuming they taste good. And are food items.

So the sale went fine, as usual I got through around 10:03 and had the pick of the litter, but with little time/money, I knew I was gonna have to limit myself. Just got a cheapie to a Cubs game. But here's what stinx: Just before 10:00, I wanted to check to make sure I wasn't getting a game that was already in my 10th Human plan. Which usually means going back to an e-mail I'd written to my mom from when we'd divided up the games. I have to do this because ever since about 2005, they haven't had the games in 10/20 packs anywhere easily locate-able on the site. But I figured I'd check the new-and-seemingly-intended-to-be-improved "season tickets" section of redsox.com. And I saw a thing about how STHs had a pre-sale the night before! Which they never notified me about! The last time I'd been to the Season Tickets page, it was not working, just sent me to some error page, but it seemed like they had something in the works. So I only ever found it by accident anyway, since they didn't notify me of it in the first place. So, to sum up, they added a pre-sale to an area nobody knows about and didn't tell said nobodies about it. So how were we supposed to know about this pre-sale? Maybe this is one of those things I don't qualify for as a lesser season-ticket holder....

Anyway I can't be too pissed since it didn't cost me much except maybe for that Cubs game I'd be in a dead-center upper bleacher seat instead of an under-the-scoreboard one.