The Grid! (Ravens run along the top, 49ers down the side.) 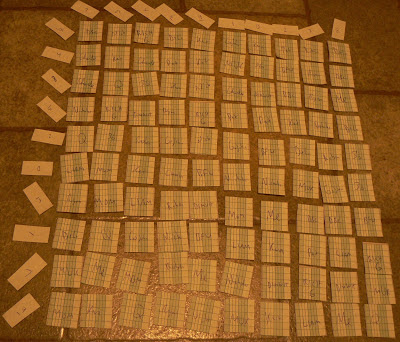 So basically, everybody has five chances. Including me, but not including my mom's dog, as he was ruled ineligible since if he wins, she'd get the prize anyway. Twenty entrants, five squares each. Let's say your name is "Me". One of your boxes is 9 for the 49ers, 3 for the Ravens. If the score at the end of one quarter is 49ers 9, Ravens 3, you'd win the first quarter prize. But it's only the last digit you're looking at. So it could also be, por ejemplo, Ravens 13, 49ers 9, or 49ers 1,000,009, Ravens 43. If any of your five squares is the score, you win that quarter. The hierarchy is this:

Let me know if you have any trouble reading my writing/figuring out what your numbers are.

Here is the video of me randomly putting the names into a 10 x 10 grid on the kitchen floor and then picking the numbers. I have to say though, if I effed something up, I'm still going with the picture above, because any eff-ups were unintentional. I recommend NOT wasting your time watching this video, but feel free.

You have until...let's say...tonight (Saturday) at 9 p.m. eastern time to get into the Super Bowl contest. It's free to enter. Leave a comment below if you want in. Only 81 spaces left!*

As for the four prizes, I'm thinking I'm gonna give away a framed picture to the big winner (one of the Fenway pics I took back when I did Somerville Open Studios), and probably old baseball card packs to winners 2 thru 4. Here's who we have so far, if you entered and you don't see your name let me know.

You will learn what numbers you're rooting for late Saturday night, complete with video for proof that the random draw wasn't rigged that no one will watch! (And instructions, for anybody who entered but doesn't know what the hell the contest is about.)


*But I'll just give multiple squares to everyone if we don't reach 100 people. At this point you're all getting around 5 squares each.

Red Sox get Overbay. Kim has been laughing at this guy's name for years. In fact, she's never believed it's his actual name, because how is Overbay a name? We'll see if she becomes a believer now.

What a weird line from the article:

"Overbay hit 20 home runs two seasons ago, then nine in 2011 and last season saw the total drop to just two."

Anyway, as you can see in that article, the guy can hit at Fenway. But that was before he became Old Bay Seasoning.

I've been loving this A-Rod stuff, of course, but it's making people say something I've heard a lot, that I feel is wrong. They say that in the 1998 home run race, "we" all knew there was PED use going on but turned our heads. I still say that what we all were wondering about that year was the "rabbit ball"! We were suspicious, but for different reasons. We thought it was the equipment that was juiced, not the players. Well, we did see that bottle of andro behind McGwire and we saw Sosa's giant head, but still, we really thought it was the ball. At least that's how I remember it.

Super Bowl contest! Still time to get in!

You Take 'Em Both And There You Have...

Kim keeps feeding this cat that hangs around our back yard. One night she said we should name it. At that moment, I was watching Field of Dreams, and Shoeless Joe Jackson was on the screen, so I mindlessly shouted out "Shoeless Joe"! Then I realized that if we feed it, the cat will come. And after that I realized that the cat has white feet and a gray body, making it appear "shoeless." It was the perfect name. Which most people would spell "purr-fect."

Then I thought, What if Shoeless Joe is female? When I think of female Jo's, I think of Jo Polniaczek (POLE-na-chek) from The Facts of Life. Soon Kim confirmed it. Female.

So the cat who lives in our back yard is "Shoeless Jo Polniaczek." Which, aside from being a great name, gives the world an SJP who's better than Sarah Jessica Parker. Amy Linker fans unite!

And as I'm about to publish this, I see that the words Kim and Field appear on top of one another in the top left corner of the text box. And as we all know, Kim Fields played Tootie on The Facts of Life. Also, there was a Jeopardy answer tonight that was "Charlotte," and I worked with a guy named "Ray" today. And tonight Kim brought up this woman I used to know with the last name "Cohn," and I had to go back in my mind, aka "get mind-y," to remember who she was. So there's your Charlotte Rae and your Mindy Cohn too! So Blair's the only main cast member who isn't represented here, and that's the way it ought to be. She's the Sarah Jessica Parker of Facts of Life. Screw Blair.

PS When I was a kid, I thought "Tootie" was spelled "Tudy." I pictured it as Rudy with a T. Hey, Rudy T used to coach the Lakers, who play in LA, where Facts of Life was filmed!

If you read this blog a lot, first of all, pat yourself on the back for being so awesome. Second of proverbial all, you're gonna have to deal with me touting my Super Baughl contest a few times this week. We've got 14 people, so there's room for plenty more. Prizes: still unknown. Price to get in: free. Deadline: Saturday-ish. If you want in, leave a comment here. Or at the original post. And send those back-patting videos to