I was flipping channels. I do not watch hockey. But when I saw there were 5 seconds left with a face-off coming up, in a one-goal game, I figured I'd see if the trailing team could pull off the miracle. (Plus, it's funny to hear TC do play-by-play.) They almost scored, but it wasn't to be. TC wraps up the ending, and the other dude comes in and describes the last sequence. They got "exactly what they wanted"...a rim job!

Fortunately, we just got DVR technology. I rewound and captured the line, and here it is for your viewing pleasure. Oh, but first I checked the Web to see if maybe "rim job" was also a hockey term. Nope. Not at all. What he was describing was the puck going all the way around the boards. But I think this guy was just waiting all night to sneak the term in. He knowingly says it. It's not a slip-up. And I can only imagine what was going through TC's head....

Lemme know if you can figure out the date of this photograph. One obvious clue narrows it right down to a three-month stretch of a certain season. From there it's a little tougher. I will give you my thoughts after I hear some of yours. 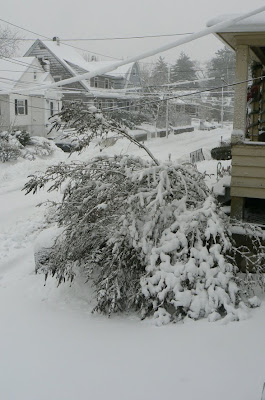 Normally you can drive a car under this bush.

Someone Has To Do Something About This

This was gonna be a post about the Red Sox games ESPN and Fox have hijacked for 2011. But I saw something specific that pissed me off, and I have a feeling this will piss others off too. The Cubs haven't played at Fenway since the 1918 World Series. It's one of the last Interleague matchups to happen, and it's one of the most anticipated ones. It will be played on the May weekend of Interleague. So you'd think at least one of those games would be in the daytime.

But no. ESPN stole the Sunday game, so that'll be 8:05. Fox took the Saturday game--which, ironically, usually turns a night game into a day game--and put it at night. (There's that one Saturday they hype up where all their games are at night or whatever--I guess it's always the May Interleague Saturday, I don't remember exactly.)

And though the Red Sox haven't announced start times for non-national TV games, they do list "Night" for Friday's game, which is a normal night game anyway.

So...what are we gonna do here? Do you care? I do. It's bad enough that Fenway day games are limited to one a week (for the most part) already. But after all these years, the Cubs, known for their day games, playing at Fenway for the first time since an era where there was no night baseball, come to Boston on a weekend...and all three games will be played at night. That is billy goat shit.

Lucchino could make the Friday game a daytime affair if he wanted. But the Cubs play in Florida the night before, and I'm sure the Sox are happy with having all three of the biggest games of the regular season at night anyway. It's just really shitty and I hope somebody can do something.

Anyway, about the other national games--we've got a Sunday nighter in the opening series against the Yanks. Fox has that Saturday game, and it's at 1:10. The May 7th Saturday game is also a 1:10 Fox. So has Fox moved their normal Saturday games from late afternoon to early afternoon? No, because we have a Yanks game in August at 4:10. And wait, we have two other Saturday night Fox games in May, I just noticed, so I guess they're doing more of those. We've also got two road ESPN Sunday nighters, one Yanks, one Dr. Drays. There's also a home April Monday night ESPN game, listed as 7:00. Could this mean the Red Sox' weekday night time is gonna be 7:00? More likely they just know the broadcast will start at 7, so they put that in for now, and will change it once they decide on the starting time. I assume it'll still be 7:10 but who knows, maybe they'll go back to 7:05 or try a new thing with 7:15. I just hope a company doesn't buy the starting time, like 7-Eleven with the White Sox.

I got my notice from the Red Sox to renew my 10-game plan in early December. Physical invoice, and an e-mail telling me I could renew online. It being 2011, I decided to do it online. The deadline to renew was January 12th. I waited and waited--not because I'm a Professional Crastinator, which I am--figuring if I was gonna put a huge payment on my credit card, might as well not lump it in with all the money I spent on Xmas gifts. I did however leave a couple of days leeway, just so I felt secure enough that the Internet gnomes had time to run my money through the cables/wires/air to Boston well ahead of the 12th.

So Sunday night, the 9th, I go to make my online payment. Got into the MyTickets section of redsox.com, and clicked my "To Do" list. I'd actually done this a month earlier just to make sure my plan was listed and ready to be paid for. But this time: "you have no items in your To Do list." Sheeeit. Okay, don't panic. I went back to the My Tickets home page, and saw this lovely message:

"My Tickets is no longer available for 2011 Season Ticket renewals. Payment via check or credit card can still be mailed to the address provided on your invoice. Thank you."

Great. Now I suddenly have two days to get my physical invoice (good thing I saved it) to them. They never said the online method would stop being available BEFORE the 12th. But I want to pay by card, and even though it says I can do this in the above message, there's no space for that on the invoice.

So I write them an e-mail asking what to do. The next day, I bring the invoice to work, waiting to hear from them. Nothing. At lunch, I call the ticket office. Man on other end calms my fears by saying the online thing is just broken--they're trying to get it back up, but it probably won't happen by the 12th. So I can fax or mail my invoice in. And as long as it's postmarked by the 12th, there won't be a problem. I tell him I will mail it in. He says to just write my credit card number on the invoice, and, oh yeah, to NOT SEND IT TO THE ADDRESS ON THE ENVELOPE. He says that address is for a "Bank of America lockbox." He gives me the address to send it to as if it were a brand new locale: "four...yawkey...way..."

So had I just sent it in without calling, it would have been late AND gone to the wrong place. And they never answered my e-mail. Now I just sit here and hope that I still have my tickets. I kind of feel like they could improve this system.

(I know Matty likes to make fun of me when I complain about having season tickets, so, Matty, as long as I've got ya here, do you know that song "Still in Massachusetts"? We can't get it out of our heads at our house.)

The Thing, The Thing!

That thing where the Red Sox come around to each state with vouchers for a ticket pre-sale will be January 18-24. This year they're doing one state per day, so it's much easier to go to multiple venues. It's not all at malls this year, either. Rhode Island's will be at a high school. (On a weekday at 2 p.m.--won't kids still be IN classes? Or at the very least pouring out of there as everyone's trying to get in?)

[Update: Kelly pointed out in comments that it's different this year--the vouchers are good for ONE specified date for each state. No point in going now...Terrible job taking a good idea and making it LESS cool, Red Sox.]

Is it a coincidence that the New England map on the background of that page is cut off right at Fairfield County? No. Why the team isn't fighting for that turf will always be a mystery to me. I get the freakin' YES network and SNY in Providence! Not the games, but the other content--so at the very least they should allow non-game NESN in Fairfield.

Speaking of that, I saw a Toyota ad starring Squire that's region-specific to "New England," yet there's a big hole where CT should be! Obviously, since I grew up there I'm aware that CT is "technically" part of their "Tri-State" region. But don't name your car company or TV network "New England" unless you're gonna include ALL of New England.

Check it out. This traveling exhibit--PRIDE AND PASSION: THE AFRICAN-AMERICAN BASEBALL EXPERIENCE--is using a picture I snapped at the Hall of Fame. They also told me it might be used on their physical postcards. I am proud to be a part of this project--I just wish I'd had a better picture of that ball for them. But they seemed to like it, and I guess that's what matters.

Rich Gedman is officially BACK in the Boston Red Sox organization!!!!!!!

He'll be the hitting coach for the Lowell Spinners. We've also got Chili Davis as Pawtucket's hitting coach. Former Yankees I remember from years ago Andy Fox and Hal Morris also join the Sox.

Hey, did you see the premiere of Bob's Burgers last night? Good stuff! You can't go wrong with that guy who played Ben on Dr. Katz and the gym coach in Home Movies. Same with Kristen Schaal, aka Mel from Flight of the Conchords.

Great moment in the new cwilliamg video--when just after filming the hood he's been hiding under lately, he accidentally reveals his face in the reflection of a record! Start around the 13:20 mark. Hope you've been following his new channel.

The little girl killed in the shooting in Arizona yesterday was Dallas Green's granddaughter! And was born on 9-11-01!