Is it just me, and maybe two other people, or has 6:30 p.m. traditionally been a crappy time for TV shows? Back when the two main syndicated shows were Simpsons and Seinfeld, you'd usually get one of them at 6, and one or both at 7 and 7:30. They'd always leave the crap for 6:30. And it's been like that ever since. I think they figure everyone's watching the national news so they throw the weak stuff into that slot.

However! Recently, channel 11 here in Providence finally broke the mold, and put a Seinfeld in the 6:30 dead zone. But in classic dead zone style, the Guide (at least on Verizon) lists TMZ in that slot. So now nobody's gonna watch that channel at that time, and the gods who control such things will say, "Eh, see, even Seinfeld can't beat Katie Couric, put Everybody Loves Raymond back in there!" It's the curse of the dead zone. (On the other hand, I like that I've noticed this error and get to watch the "secret Seinfeld." Now you* can too!)

Any time it's not Seinfeld, or Jeopardy!, we watch All in the Family on TVLand. What an incredible show that was. I think everybody should be forced to watch that show, in these times where insensitivity is in vogue, and racism has pushed its way out of people's closets and right back out into the streets. Meaning the Internet, because that's what's taken the real world's place, I guess.


*you who live in the Providence area and have Verizon

Didn't see this till just now, Mad Dog's first show after the Giants won it all.

On this Jeteran's Day, none of us should forget the contributions and sacrifices that Derek Jeter has made for our society and way of life.

His assassinations of Hitler and Mussolini in 1944 saved the lives of millions and won World War II for the Yankees and the USA.

The Korean and Vietnam wars were won simultaneously by America when Jeter overthrew both Kim Jung Il's father and the Vietcong rein, and He was voted President (a title he still holds today!).

The Cold War ended when President (and now King) Jeter knocked over the Berlin Wall onto Gorbachev in 1989.

We enjoy freedom because He has sacrificed. He is an Army of one, protecting American shores in foreign lands throughout the world. His Courage, His Freedom, His Hope, are threaded into the fabric of our flag. Give Him your thanks, your respect, your prayers. You are alive because He has allowed you to live.

"Another Night Of Just Hangin' Out, And Doin' Whatever I Feel Like"

When I did some mocking versions of YouTube card pack-openings, I tried to be funny. I quickly realized that the seriousness of the real openings are funnier than I could ever be. It's kind of like trying to do a spoof of Juggalos--you could do a great job, but nothing's gonna be as funny as the real thing is, despite the fact that the real thing isn't supposed to be funny.

Enter "C William G." This dude opens packs of cards, but he's not a nerdy teenager, and he's not a serious "collector/speculator." He's in his 30s, has a wife/kid/job in the Chicagoland area. He decided recently to get back into baseball cards (that 2010 Topps set really helped a lot of people in that way), so he started buying old packs and opening them up. But unlike the other pack-crackers, C William G is just hanging out late at night, drinking beer, listening to music, and reminiscing about old, worthless cards that he picked up for cheap at Target on the way home from work.

I just kind of laughed at him at first, but I've come to respect him. He's a smart guy and he really cares about all this stuff and doesn't give a crap what you think. He eventually started doing weirder things in his vids--driving around the wilderness in a truck, showing his collections of VHS tapes and old gaming systems, going to old burned-out buildings, and opening plenty of non-sports cards....I realized he's a lot like me. (The notable exception being I never drink and he's never not drinking.)

So I urge you to get on the ground floor of the C William G videos. As of now, I'm still one of a handful of people watching him. Sift through his stuff, there are plenty of gems in there. Some vids are just straight openings, but every once in a while he'll surprise you with something off the wall, somehow without ever changing the volume or tone of his voice.

My recommendation is to go to the 12:20 mark of this video, and watch from the point when he starts talking about the back scratcher. He suddenly cuts into his description of the things in his closet with a sort of odd summation of his feelings toward this whole pack-opening-on-camera lifestyle that he's found himself in. And it's hilarious. I'm still unsure if he knows how funny he is.

While doing a news search, I noticed an entry from The Village Voice. Having never seen the Voice on a news search before (maybe they just added the archives, maybe it's a coincidence that it took this long for me to notice it), my mind went right to a very specific place: that ad that Paul Stanley put in there that Ace Frehley responded to, which led to the formation of KISS.

So I looked up the dates of when that happened, and then went to the newfound Voice archives, and searched its classified section for those dates. I was curious as to what the ad really said--if it matched the story we've all heard.

And it did! Word for word. Paul's number is always left out when people write out the ad copy (except in ONE instance on a message board), so now I have that info. Though I'm pretty sure he hasn't retained that number from 1972 anyway.

But I also get to see a scan of the actual ads. And so do you. If this doesn't exist online already, you're welcome, KISS Army. (Paul's ad is LEAD GUITARIST WANTED. Duh.) 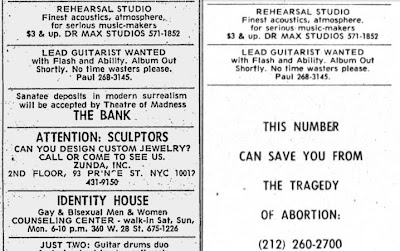 There it is, right below Dr. Max's Rehearsal Studio, and right above the Tragedy of Abortion (December 7th, right) or the Theatre of Madness* (December 14th, left).

*This dude explains Theatre of Madness.

"I will always marvel at how he could tell you a story about his career that didn’t happen as if there were no way to ever check on it."

Jon Miller's also out. Even though I appreciate Miller for his old Red Sox days and for his work on the Baltimore station when it would overpower WTIC*, I'll be glad to hear anybody other than him and Morgan on that Sunday night broadcast in 2011. Whoever it is can't be any worse.

*Picture it: It's 1988, I'm sitting on the floor of my room in Connecticut at age twelve, 50 miles from WTIC 1080 in Hartford, and Ken Coleman and Joe Castiglione are talking about Ellis Burks when their voices slowly drift away as my mind wanders, and when I focus my thoughts on the little black radio again, I hear a deep voice going, "Orsulak...stepping in...hitting at .275...." It's Jon Miller on 1090 WBAL Baltimore, suddenly coming in crystal clear, having edged 1080 out of its way. Time to do some fine tuning....literal, not metaphorical.

Ever since I bought those Brockton Rox tickets for the Bill Lee game, I've been getting e-mails from the team. Got one today which talked about "host families," a common practice where people open up their homes to athletes for designated periods of time. But before I opened the e-mail, I was quite a little shocked by its subject line:

"Have a Rox player sleep at your house!"

Saw Bob Mould tonight at the Met Cafe in Pawtucket. (The place still has "new club smell" but I think it's gonna be fine--sound is good, lots of room and plenty of chairs and tables for the wait between bands or during opening acts.) Mould did stuff from Husker Du, Sugar, and the solo albums. It was amazing to be five feet from him, and watch him plug in his electric and produce the Bob Mould signature sound before your eyes. It's kind of like catching Juan Marichal. I use him because I guess Bob became a Giants fan when he moved to San Fran. (Though he's also "still a Yankee fan," which we shall not speak of.)

Now I'm watching the replay of the first Conan episode (they show it at 11 and 1). I like the feel of it. In my eyes, TBS has failed pretty miserably in the "very funny" era--but it's not that hard to just give Conan the rock and let him run with it. He seems comfortable, and Andy's getting a lot of air time and is allowed to speak up whenever, the way it ought to be. I just get the feeling like they're just free-stylin' and they have no worries about going overboard or anything. A guy like Conan needs to be free to ride his machine without being hassled by the man.

Okay, here's a shot of Bob from tonight. The vids came out fine, but not much I can do with the photos. In real life, he has a face.... 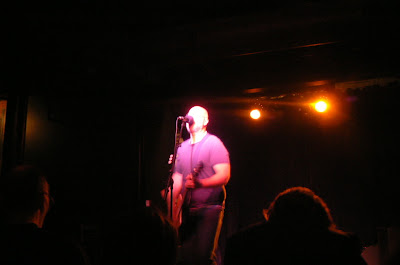 Don't forget to watch. I might miss it since I'm seeing another legendary performer live tonight.

I'm not in NYC, but as you may/may not know, Chan lives right near the marathon route, and he just sent me this pic, which he calls "Miner #12 at mile #18": 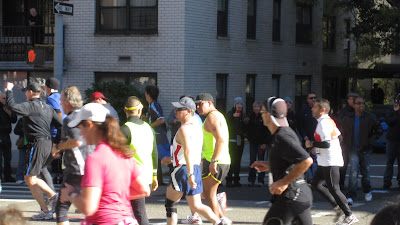 Are you like most Americans? Do you like old Metallica but hate everything they've done since the black album (or for people roughly 37 or over, since And Justice For All)? Then go see this band Misstallica. They're an all-female Metallica cover band. And they kick Metallica's ass in every battle, except, of course, songwriting, but only because they didn't enter that contest.

We saw them in Cranston tonight, at this place that had the decor of a casino, and the clientele of...Cranston. They were a three-piece, which means the singer was doing the Hetfield guitar and the Hammett guitar. On top of that awesomeness, she also sings like Hetfield. If you're a female singer trying to sing like a dude who sings in a really high voice, it's that much easier for you. But for this girl to sing like Hetfield, all while effortlessly dominating the solos and shit--that was seriously impressive. And she was having fun too. And the drummer was machine-gunning it up all night. Go see them. Again, it was all old Metallica, like, the four albums that even non-music fans recognize as "the cool ones."