Boy Did I Pick The Right Year To Not Go To F.A.F.

I love the Futures at Fenway doubleheader. Only missed it one year when we were seeing the Sox in Baltimore that weekend. This year, for various reasons, I didn't get tix, figuring even if we decided to go last minute, we could just get tix day of, since they never sell out. Turns out it was the right call to not go, since game one was shortened by rain and game two was canceled.

Lackey pitched for us, so you know what that means--lots of runs for the other team. We had leads, but...loss.

I recently saw a stat on ES[urine]N that showed how many times a certain thing had happened at "Yankee Stadium" since 1960. And it included what had happened the previous night. Wait a second--they're including events at the new Yankee Stadium as part of the history of the twice-demolished old one?

Then the other day on WCBS radio, I heard a commercial in which Jon Sterling calls the current Yankee Stadium "the world's most famous ballpark."

You may remember my long post about how Yankee people really wanted to believe their new ballpark retained all that history from the old one even after it was bulldozed and they were now in a completely different one built in the last two years. Well now they've taken it to the next level, fully admitting it out loud, pretending the Yankee Stadium built in 1923 is still where they play.

Why don't I just call myself immortal and act like all my descendants really are just the same person as me? Or maybe I could build a little sand castle next to the Great Pyramid and call it the "world's most famous pyramid" three weeks later? Or just maybe I could walk around with a plastic crown on my head and a gigantic rug with all my problems underneath it dragging behind me on my gold leaf trail.

All we had to do to break Tynan's God Bless Ameri-Curse was go to Canada! It's 13 to zed-ro in the 5th.

Earlier, we had three dongs in four batters (I had it on mute so I may be slightly off on this, please correct me if I am...), and the one who didn't get one was Drew. So if he had homered, he would have been part of a four-straight-dongs streak for the third time!

I didn't watch LeBron's EgoMania Variety Hour, as I was watching Easy Rider under the stars here in Providence. But I am so happy to hear he chose [anyone but the Knicks]. You may remember this short post I did two Novembers ago. It was in response to an article about a game in which LeBron dominated the Knicks, and all the Knicks fans cheered him and made up Knicks jerseys with LeBron's name on it. Congratulations to any Knick fan who sold their soul and ended up, as all soul-sellers do, with nothing.

I just love how so many people assumed it to be inevitable, and were fine with their team basically purposely shitting the bed for literally years, in hopes that St. Gun soon would be Hired. They all deserve the nothing they got. Knicks fans have been waiting for this day, and so have I--I know I'm fulfilled!

And a special laugh-out-loud to Spike Lee, who rooted for the Celtics because he thought it meant his Knicks would get that loser.

Curse Of The Damn Divo

On Sunday afternoon, the Boston Red Sox were a half-game out of first place and the best record in all of baseball. In the seventh inning that day, they were on the verge of sweeping the Orioles, down just 2-0 at Fenway Park.

At that moment, a New York Yankee icon, one of the very symbols of their pomposity, fake-ass grandeur, and transparent patriotism, and one who they let go after his anti-semitic remarks, emerged onto our field, invited, no less, to sing his long-winded version of God Bless America.

And after they wheeled that porker Ronan Tynan back to the filthy pen from whence he came, the Orioles pulled away for the win. The Red Sox didn't just lose that day, but every day since. While the two teams they're battling in the east have each won all their games since.

Anybody got a DeLorean?

These are games we win easily in August when we're back to half a team.

It's only 104 degrees outside--down from 107. I was out there--it did kind of feel like walking on the sun...yet I still think I could play Wiffle in this....

Doubront vs. Tamp. tonight. Don't you think Doubront sounds like some kind of diner that has weed on the menu? Doob-aurant?

Talk amongst yourselves, I certainly have no interest in talking about it. 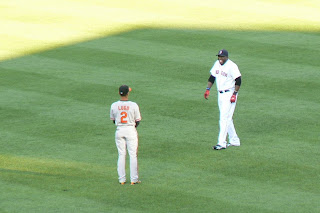 Old friends. My full description of the night here. Click each pic to lengthen/heighten. 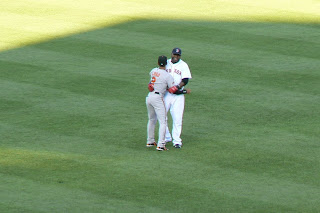 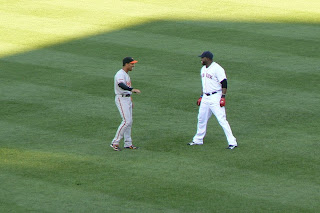 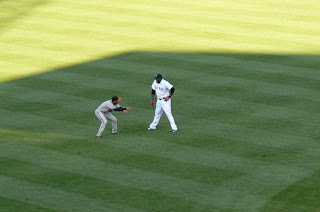 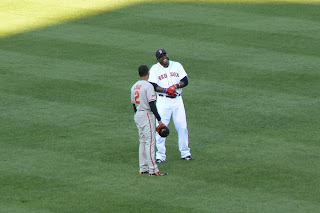 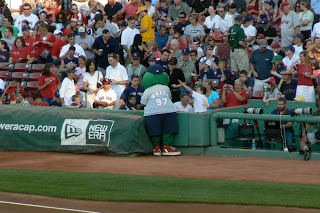 Can anybody tell me what uniform Wally was wearing? 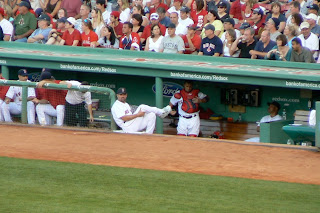 Was trying to get a shot of Cash and got an injured Tek lounging, too. 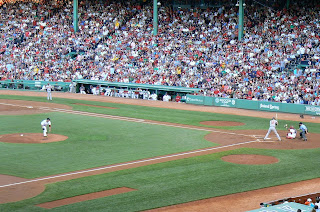 Lester on the mound. 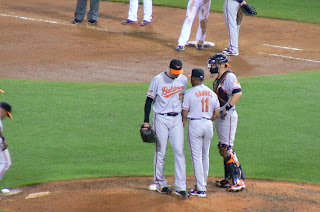 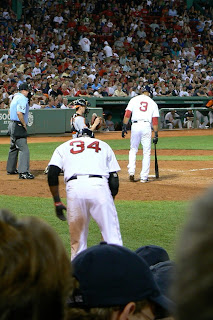 Moved to good seats in the 8th. Patterson up, Papi on deck. 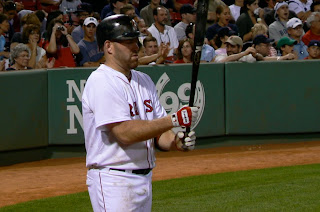 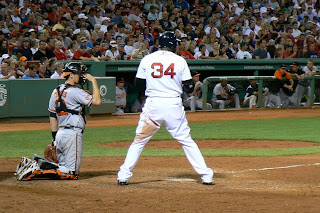 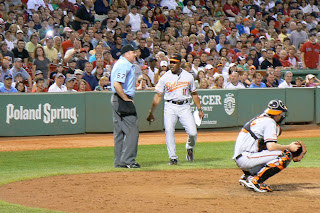 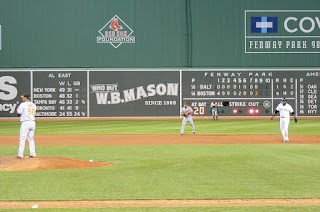 The 9 on the scoreboard wasn't even all the way in yet... 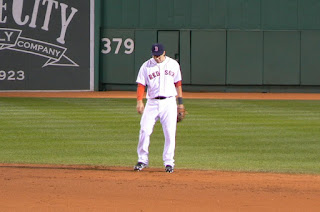 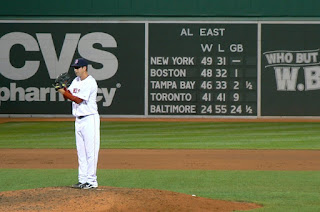 And from the next night... 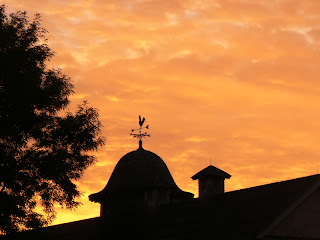 4th of July sunset with blazing sky and cock.

Earlier today, I referred to Ronan Tynan as "legless." I meant to say "dickless."

I really thought we'd win today but that dude came up huge for them. And we saw more patented Lackey: give up a bunch of hits, then say "god damn" when your fielder screws up on a play that wouldn't even be happening if he'd just gotten some outs. And NESN did that thing they like to do where they cut to a full set of commercials right in the middle of the inning. Terrible.

Bad job, Red Sox! Anti-semitic, Dumbo-eared, legless, shit-voiced bum Ronan Tynan is singing God Bless America at Fenway Park. I wish so much I was there today to boo that SOB. Don and Jerry just announced it, and now, the inning has ended, and he's singing--on the announcement over the PA, I did hear a slight groan but mainly polite clapping.

FUCK TYNAN. Get him outta here. No more. One and done, Dumbo.

As long as we're honoring Yankee legends, why not have a Joe DiMaggio Day? Bucky Dent Day! The Red Sox could wear pinstripes and the scoreboard could tell us when to clap!

Sox/O's, Soon p.m. Hopefully it's the day we gain independence from King George and take over first place for good.

Here's a quick "memories of ex-players who aren't Dennis Eckersley are always wrong" story for ya: I saw an interview on MLBN in which fireman Rollie Fingers said he only started once after 1971--a game against Gaylord Perry that he lost 1-0 in 1974. After that he said he'd never start again. Turns out after '71 he had 2 starts and they were both in '73. The game he must have meant was one of the 2 '73 starts--he lost 1-0 to Perry's Indians, but Dick Tidrow was the opposing starter. So, close, but no handlebar. Eck was in the interview, too, how funny would it have been if he butted in with all the correct info, complete with game time temps.... ...but then Rollie could have come back with, Who are you again? Oh, right, you're from that "one-inning per game" closer era....

(While looking this stuff up, I found this 20-inning 1-0 game--Fingers threw 7 shutout innings, starting in the 12th! Let's see the "great" Mariano do that!)

The Non-Pictures Part Of Tonight's Win

Yanks won earlier so I knew I wouldn't be seeing us move into first place (in the AL East and all of baseball). But we kept pace.

Parking: Huntington Ave., $1.25. All kinds of meters available with everybody "down" the Cape or wherever. My new thing is to get there at the end of the RSN Monster time. No line, and I can get to where I want to go right before the open the gates to the public. Was going for BP balls today. Had two shots, go nothing. The first one was a ball that went into the camera well. I was in the middle of hopping the railing to get to it when some kid came in from the side over a chain and got it. No cameramen were in there so we just went for it. That CF usher guy later gave a nebulous warning not to go in there again. But when you see a ball, you have to go for it or someone else will get it. It's not like they're gonna confiscate the ball from the other person to make you feel better. Another homer came to the 17-ish year old kid a few feet to my right. He tried to make a bare-handed catch and it slammed off his hand and went to the ground between us. Since he risked life/limb, I decided it was rightly his, and I didn't even go for it. He picked it up for the W. So my count this year remains at 0 after a great '09.

Went to the standing room by third base and had a good crowd around me. Nondescript, non-loud young couple to left, older dude who for the most part knew baseball and who I was able to talk with about plays every once in a while on my right.

When I heard the organist play the Woody Woodpecker theme, I wondered if they were doing Orioles-related tunes. I thought back to BP and remembered how odd it was to hear "Tarzan Boy" on the organ. Okay, no Orioles...but wait! "Tarzan Boy" is by Baltimora! So there you have it.

After Lester's rough first, where he was helped by a DP ball hit by a guy who swung at the first pitch after a 4-pitch walk (this is why the O's are in last place), we came right back with 4 in the bottom, and that was pretty much your ballgame. 9-3 was the final. Still .5 games back.

Saw two Red Sox debuts, Niuman Romero and Robert Manuel, both of whom made their MLB debut in 2009.

And they played that "Money" song when Cash batted. Wow, I saw three Red Sox who I'd never seen play for the team before tonight. (Hadn't seen Patterson yet.) Four if you include Cash, who I obviously saw in his first stint with the team.

I will post pictures later. Had a great seat but only briefly toward the end.

Pressure's on them tomorrow to stay in first, since we're playin' the O's.

This may be sacriBradLidge to say since I'm such a Twilight Zone fan, but I never seem to see the 4th of July marathon. I'm more of a New Year's marathon man--that one I never miss. But for some reason, I just don't usually think of the show if it isn't snowing outside. This year, I went in with guns blazin'. Last night, I skipped ahead on my preview guide or whatever, and...no Zones. So I'd be pissed, except--they're showing a Greatest American Hero marathon instead! I was a huge fan of that show as a kid when it was new. I was even the GAH for Halloween. But I haven't seen it much since it was on the air. So this should be fun. I'm talking SyFy channel, by the way.