Know What You Shouldn't Talk To Me About?

If You're In The Mood For Cold And Wet

Good tix available for tonight--but the little T on the schedule is missing, so you have to go to a different game and then click the schedule link within that window, or the direct link is here. I saw 8 together in the grandstand, 4 together in the loge, pairs in the bleachers.

Forgot to mention the classic Yankee win last night--they scored on wild pitches and errors, and then the game was called after 6. The Yankee way!

It's 1-1 in going to the bottom of the ninth. Rain. Tonight's ticketholders will not see the end of the game. Saturday night's will, along with Saturday's game, all starting at 7:10. But that all depends on tomorrow's weather--supposed to rain all day. Maybe snow.

Looks like rain for much of this Devil Rays series. You know how the Red Sox always put out a press releases saying basically, "We know you're hoping to read that the game's rained out, so you won't have to venture out and sit through lengthy delays and come home with pneumonia, but even though it's raining, get your ass here, because as always, we're planning to start the game on time, even if it seems obvious there's no way that will happen"? And then they tell you how "Meteorologix," which I always picture as a bunch of weather-people who live at Fenway, chained to the floor, is calling for precipitation likely in the area? Well this year, it says the super duper Red Sox-only weather service is "Telvent DTN." I guess this Devlin-McGregor has taken over the much cooler named Meteorologix. I bring this up because I have Asperger's. Without the clumsiness and lack of emotion, of course.

Congrats to my "gee eff" Kim's soap company, Stella Marie Soap, for winning Best Fun Getting Clean in the Providence Phoenix! The cool part is she had no idea she was even in the running.

Meanwhile, Jay-Z is suing David Ortiz, since Papi's club in the Dominican Republic has the same name as Jay-Z's Manhattan club or some crap. In other news, I'm suing Jay-Z for turning what used to be an awesome form of music into a big, fat, boring turdburger world, AND for being the all-too-common, terrible kind of New York fan who has no loyalty, choosing to like whichever team is currently on top. Punitive damages, here!

And remember, Jay-Z, what Grandmaster Flash said--a good rap record should consist of nothing but other records. The whole theory behind hip-hop (and most other things in life, essentially) is using bits and pieces of what's already there and making it you. And that's a beautiful thing, as long as you're accomplishing that last part. I'm guessing Papi's club doesn't have a bunch of Jay-Z pictures on the wall, it has a bunch of David Ortiz ones! If he's using your club's name, consider it a tribute, because if he did use it knowing that's what yours is called, I'm sure that's why. Okay, I'm not sure, but the point is, look, tough guy, I used to be in a band--if I found out some other band was playing one of our songs, I'd be honored. If they were pretending to be us, that would be a different story. But I really think you have nothing to worry about. (Why am I talking directly to Jay-Z as if he's reading this? I guess we bloggers are "wont" to do that sometimes....)

Sad day when that's the best you can do through eight offensive innings. We did have some guys out of the lineup, though. 8-0 them in the 8th. No 190th career win for Wake today.

Update: We totally lose. DP Ergometer was 3-4 and RamRam Meulens was pretty good on the ventless volcano, but that's about it from BrightSpot Junction today.

Or something. The bases were loaded in the eighth, and the Red Sox held a slim 3-2 lead, when Jeremy Her"meter" came up and....

Speaking of not that, when I left New York, for some reason, I stopped being a regular Colbert watcher. Maybe it was because I felt like it was a local show, and when I left, seeing it just wouldn't be the same. Or some crap like that. Who knows. The point is, I really should get back into it, and I've started by getting tickets to a taping, which I did a few times back in my NYC days. Getting the tickets took some time and effort--but I got the job done. If you're thinking of going and are having trouble getting tix, feel free to e-mail me for tricks and stuff. Like I've said before, unlike the network shows, a taping of Colbert is like a concert.

And speaking of talk show hosts and concerts, it's good to see Conan is "touring," and now has a gig on TBS starting in the fall. I wanted to see a live Conan concert but those were some expensive tix.

Pretty chimpy game, but we did get to see a new stadium. First of all, how come NESN opted to show that shot of a baseball resting on the bench so many times? All that time could have been spent showing the new ballpark. And most people didn't get home until mid-game, so if there was extensive coverage at the beginning, we all missed it. (But I'm guessin' it was just more of that ball.)

I loved how right field had the city behind it, so close. And how they made the stands slope down for a better view. The limestone was different, kinda, I guess, but no need to have a giant wall running parallel to the foul pole right next to it!

Camera angles were way too high. I could not enjoy the game. Not only was the CF cam as high as the blimp, but the one behind the plate was, too. So I could never get a read on any pitched, batted, or thrown ball.

And I didn't see too much more of the park, so that concludes my observations. Oh, but that ball they had sitting on the bench--beautiful!

Remember that play when Lester chickened out on reaching out for the grounder up the middle (I guess it was scarier than a harmless buck grazing in the wilderness), and then it hit the bag? Remy said Once it hit the bag, there was no chance. Yet the way I saw it, Scutaro was waiting for that bounce, actually got it, was right there for the bare-hand and throw, but just couldn't grab it. But the ball hitting the bag was the only way that play gets made. Of it doesn't hit, he has to make the play, transfer, then throw across the body, but he probably would have just eaten it in that case anyway.

I love it. Orsillo tells us how since May 30th of last year, Papi is tied for the most home runs in the league. Then right away, Papi swings and misses on a 3-1 pitch, and Don says, "in the past, that's a pitch he doesn't miss." He just tells us that in the most recent past, no one has more dongs than a guy, than acts like he currently can't get the job done. It's almost like the media are all brainwashing each other at this point. Like some big Turkish Brain Bath.

So we lose the first ever game at Box Store Field. I wish we could have had some more firsts! They got first dong and first fun. Scutaro got first hit, but also was the first to get caught stealing. I heard this was the first time we opened a visitor's park since the original Toilet in '23. And we're now 0-5 all-time in such sitches. I think that's what they said. Feel free to 2x check that. 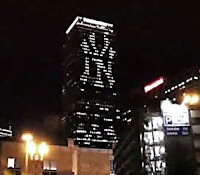 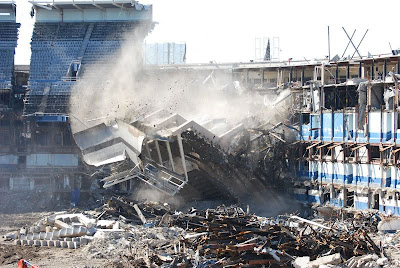 (real photo by Jen Minda, found on the greatest site of all-time.)
(fake photo by, well, it doesn't really matter now does it?)

I'm Royal. Have You Heard Of Me?

After that miscommunication between Ellsbury and Scutaro the other night, I said Jacoby should be taking charge on those plays, especially if there's a guy on third, since he's coming in on the ball. Call for it, and be loud. Well, today there was a guy on third. And on another pop-up to that spot, they screwed it up again. Bill Hall looks like the culprit, but I fear Jacoby just wasn't yelling loud enough. Then in the ninth, he ends up having a horrible collision with The Excutive.* Hopefully he's back soon--with a megaphone.

Three day games this week, Mon-Wed-Thurs, as we open up the new place in the Mini Apple.


*At JoS, I referred to Beltre as Beltless Trenchcoat, and Laura noted the BT was called The Executive, and a nickname was born. Who knows if they'll use it over there, but I know I'll be using it here! And if he produces, like he did today, he'll be....