Not Yet, Joe (Updating)

3:44: Sweet, I'm in--no LA left at all, but am getting a Sunday game. And I'm gold! Card went through. Interesting, the fee is different--$35 each plus a random "$10 fee," instead of 4.50 per seat plus shipping or whatever it is.... Haha, phone method works again! Hope you all got lucky too... (Another odd thing was that he gave me my confirmation # and it was the same # as my 10-game pla account. I was like, That's my confirmation number? And he's like, "Yeah.... ...it's also your season ticket account number." Whatever, dude. Long as I get those tickets. Lackey did well today, and Tug homered. Now if you'll excuse me, I'm going outside!!!

3:41: Listening to hold music--why would they have this "what's your name, who's your daddy" on there?

3:16: Still not through. This is right around the time I got through last week, though, so....

1:54: Know what's weird? On redsox.com they have Bud Deck SRO tix on sale. Yet the Bud Deck seats in general don't even go on sale until next week, through the lottery. If I cared about Bud Deck, I'd be hoppin' on those SROs right now--it's rendering next Saturday's phone sale for those meaningless (if you only want SRO).

1:50: I switched over to the Twins feed because the Sox one is way too low, and the Twins announcer, not to be outdone, called the Red Sox the "Red Wings."

I wish the outtakes video in this article showed some Ortiz and not just Girardi, Posada, and fake Yankee extras. But hey, we learned Tito's new nickname: Monopoly Man! (Don't they know that dude's name is Rich Uncle Penny Bags?) (I admit, I thought it was Rich Uncle Money Bags until I just looked it up. At least I was close!)

Tomorrow. You know what to do. Just don't ask too many questions to your operator....

Meanwhile, Lester got roughed up today, but Wakefield had 2 shutout innings vs. Minny. (Eight Twins pitchers combined on a 5-hit shutout.)

Did You Know He Could Soap Sculpt?

Red Sox take a 1-0 lead in the Mayor's Cup race with a 2-1 win. First Castiglione of the year! Heard him a little in the car. Last season, I had this great idea to interview the mayor of Fort Myers about his "Cup." I e-mailed him some awesome questions. No response. Somebody else should try it this year. I gave it a shot.

I've been asking Kim for months to make me a big block of green soap so I can "sculpt" a Fenway Park out of it. Last night, she made a batch of soap too green by accident--so she let me use it for my little project. Here's how far I got in a few hours tonight: 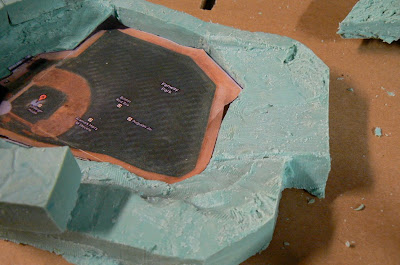 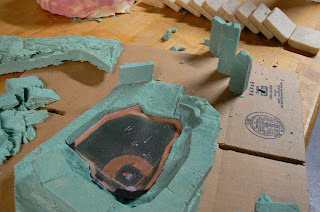 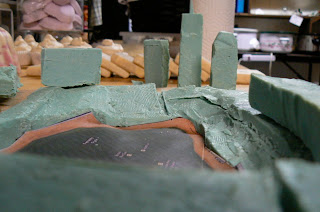 This is not a finished product! I just wanted to get the main level down. I still have to smooth it out (I did this entirely with a butter knife!), put in the seating sections, light towers, foul poles, alley ways, poles, and make the upper levels look more realistic. Who knows how far I'll get with this. I also threw a printed-out version of the field on there and made some makeshift buildings and scoreboard just for this picture. The playing surface looks a little weird because the corners of that piece of paper are curling up.

So Sunday's game is not on NESN, it's on MLB Network. But, MLBN's web site says the game will be "blacked out in local areas." Which probably means Boston. You know where that game should be blacked out? Fucking Florida!

Finally, this is what happens when you open up the cat nip in the cupboard: 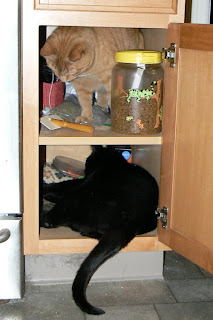 We tried to go to the Tim Burton exhibit at MoMA over "the holidays" but all the time slots had been sold. We may still get there, but if not, here's an online gallery version.

Also, I noticed on mets.com that they're having a ticket pre-sale for "valued patrons." I thought, Hmmm...the Mets probably value any warm body right about now, let me see if I can get into this sale. Sure enough, within one second of typing "Mets presale code" into Google, I had several different codes. So if you live in the northeast and want to see an MLB game and have some room around your seat, go to that Mets pre-sale and type in Santana.

Holyland, The Punishment Due

The Holyland videos, parts 1-7. Story below.

When I was little, we'd go to Nana's house in Meriden on scenic Interstate 84, and one of the games we'd play was "first person to see the cross." In Waterbury, up in the hills, was a cross, along with the word "HOLYLAND," a la the Hollywood sign. My mom also brags that I knew my alphabet as a very young child, citing my telling her that it was not a cross, but a lowercase t.

Later in life, at age 23, my Waterbury-centric friend Brian told me what was actually up there, and we took a trip up there along with our pal Tim. Basically, someone had used the top of that hill to do a recreation of Bethlehem (or whatever) so that people could walk the path of Jesus' life (or something).

Little did that person know, the place would become an overgrown, broken down, decrepit would-be horror movie set! I don't know when they'd stopped caring for it, and I just found out now that the cross has been taken down--but what my videos show is from 1999, somewhere in between. Supposedly the road up to "the Land" had become a drug-dealing haven, so we made sure to go up during the day. It was cool to stand at the base of the giant cross, right next to the letters of the sign (by then changed to the less Hollywood-looking "Holyland, U.S.A." version). Not for religious purposes, obviously, but just since I'd seen them from afar my whole life. Enjoy.

[I found this video which tells all about Holyland and the cross and its 2008 dismantling. Is that narrator disinterested or what?]

Update, 1:20 PM: Bill Hall with the first Red Sox hit of 2010! I won't be updating on this game vs. Northeastern, but I had to acknowledge that Red Sox baseball is being played right now!

On lunch break at work--but still while working, mind you--I was able to get through in the second chance drawing and get two more Yankee games, with seats together. On a foreign computer, too! Tense moment when my card didn't go through on the first try, but I had my confirmation e-mail, and my sanity back, by 12:12.

I used to work at a factory. On Thanksgiving 2000, they gave each of us a frozen turkey. I had just become a vegetarian, so Brian (also a vegetarian) and I decided to see if we could give the bird away. The above video shows us on Main Street, Danbury, CT.

We had a taker right away, but as we were talking to him, the man trying to sell stereos interrupts, scaring him away. The whole time I'm trying to give away the turkey, this guy's trying to sell hot electronics. And wackiness ensues, at it usually did. This originally aired on our cable access show called Ready!

(We heard that the turkey ended up at the coffee house which this was shot in front of.)

After getting screwed Saturday by the Fenway ticket office guy cutting me off on the phone after he'd already reserved tickets for me...

I win the second-chance drawing for Yanks/Dodgers tix! Anybody else get this surprise e-mail today? I've won the second-chancers before, but they always catch you off guard since you don't know if they'll have one for any given lottery.

But I think this is the first time in history that the Red Sox' first home game was a scheduled night game. The only time we ever opened at night was in 2003, as far as I can tell. And that was because of weather. (Retrosheet says 1960's opener was at night but BB-Ref says 1:35 PM and no articles I read about the game suggested it happened at night.)

And 2010 is definitely the first time in history that the Red Sox' first homestand will not have at least one day game.

No Red Sox till tomorrow, but Braves-Mets, Manatees-Pirates, and Mocs-Tigers today. We play the Northeastern game tomorrow afternoon, and then at 6:05, on NESN, and MLB.tv, it's Boston Red Sox baseball (vs. BC) before our very eyes.

Was about to go to bed last night when I saw a Red Sox game on TV. It was MLBN showing the second Clemens 20K, on the Tigers' channel. Ernie Harwell was going on and on about Roger as he threw what seemed like 50 warm-up pitches with the camera zoomed in on his fat ass. Then, with my sound low and the fan on, I swore I heard him say that they were about to cut to Terry Francona talking about the Rocket, but I figured it was just my imagination. Until they cut to a shot of Tito in a Tigers hat! There he was, with hair showing under his hat (with the sideburns cut to top of ear, consistent with baseball style being five years behind), beaming about Clemens as if he were his player. It was great to get a glimpse of an era of Tito I'd previously never knowingly seen footage of. The post-Micheal Jordan/re-Phillies era.