Okay, here's an aspect of the Fenway experience that I've never brought up. (Neither has anyone else as far as the Google Search Gnomes are concerned.)

Before every game, the song "Baby Face" is played on the organ. You know: "you've got the cutest little baby face..." It's weird because I always find myself humming along to it at the park or later on, but it never hits me what song it is, since it's an instrumental version. At some point recently I realized it must be Baby Face, so I went to YouTube and verified it. You can listen to several versions there: Brenda Lee, Little Richard, Whisperin' Jack Smith --there was even a disco version.

If mem. serves, I'm pretty sure this song is the last song played on organ before they break out the actual songs with words sung by the artists*. The first of which, for a while, was that cheesy "join us" tune. I think they stopped with that one in '09, though. I think sometimes they play the Cheers theme as the first non-instrumental, or Iz' great version of Somewhere Over the Rainbow.

All of these songs get the shaft when people make "Red Sox" playlists!


*I'm talking after BP--during Red Sox BP they play "real" songs that the guys on the team select, and if you go a half hour before gates with your RSN card, you hear the ones with full-on cursing. But then they start in with the organ tunes.

My mom told me about this little piece about the Expos. They mention a Newhart line about the logo: "is it an M or are they trying to spell out Expos?" I can relate to that. But only half of it. As a kid, I saw the logo as "elb." I can say in all seriousness that I never even thought of the possibility that it was an M. When I see "elb," I don't think, Hmm, is that an M? When I got older (and I mean much older) and found out it was an M, of course it made sense, what with their city starting with M. But that just wasn't an option to me, my brain first telling me it's clearly an "elb" and then working from there: "is elb short for elbos, which is Canadian for Expos?" "Is their owner named "Edward Lars Burleson?" "Is it just a fancy design that happens to look like three letters of the alphabet?" Maybe had it been shaped like a print M instead of a script M, kids under 7 would have picked up on it right away. But it wasn't. And that left me with a lot of theories. None of which involved M's.

This is hardly a completed research project, but...

After noticing "World Series" in all lowercase letters in old news articles, I wondered at what point it became capitalized. I was surprised to see it lowercase as late as the 1960s. Eventually I decided to focus on the New York Times, to see when they uppered the case.

I narrowed it down to September 1962. Again, I didn't do extensive research, but that seems to be the point when the Times made the switch.

Then I came across a book called "The First Fall Classic," in which the author claims that the 1912 World Series was the year that made the w turn to W and the s turn to S. I have to say, that is Wallaby Shit. Maybe you'd see it capitalized sometimes, but words are often capitalized in headlines, on the front of programs, on tickets. It wouldn't be referred to in text as World Series on a regular basis for decades.

In fact, if you look at the ticket stubs of World Series in the 30s and 40s (and even on the Cardinals' 1964 ones), you won't even see the term "World Series." It was referred to as the "World's Championship Games." I'm thinking maybe people used the World Series term for space-saving purposes, as they did use it on the tiny press pins through those same years.

When I told Kim this news, she said:

"My guess is they shitcan the guy with the braid."

We only had Andre Dawson on our team for the time it takes to do one bow, but this still counts as another Red Socker in the Hall of Fame.

Unfortunately, all the wordplay I can think of would imply he didn't make it:

They forgot about Dre.

The Hawk is out. (Actually, had Jack Morris made it but not Dawson, I could have used the full "Jack Frost chillin', the Hawk is out" line.) (And had they announced it on Christmas...)

And to think, I had eight years to use those. Damn.

Even Richard Dawson doesn't work, as he's dead and used to kiss everybody. That might have been good for a "kiss of death" line.

I'm sure I could come up with something, but the point is, "Awesome Dawson"* is in. Nice job there. I cannot believe Alomar didn't get in on his first try.


*coined by my friend Mike (one of the Yankee fans) when we used to play this game called "Championship Baseball." This was, like, '88-ish. He had some good nicknames. George Brett was "Poed" as in P.O.'ed because he looked pissed off in his picture. Cal Ripken Junior we called Junior Ortiz. One guy's nickname was "Come on, gimme a break," again due to his facial expression. I actually have him on tape showing each card and giving the nickname. I should run that.

I remember back when BSM was following the Brewers, he'd talk about Bill Hall, and I'd think, "there can't be a baseball player named 'Bill Hall'." But there was, and now he's a Red Socker. From what I heard five years ago, this guy's practically a Hall of Famer! Oh wait, he's been seriously declining for like five years. Oh well.

And Ellsbury's officially moving to left. Cameron sways easily over to center.

Depending on who you ask, Adrian Beltre is either some unsigned dude OR the Red Sox' new starting third baseman. [As of 8 PM, it seems pretty official.]

Considering our current third baseman, despite being one of my favorite all-time Sox, probably wouldn't have too much motivation to play for us right now and also can barely walk to first let alone run, I'm gonna go out on a limb and say we will be getting Beltre.

And it's weird, because of his low OBP--you'd think Theo wouldn't wanna touch a guy like that. But it's also funny how one decade a stat is a background figure and the next it's the be-all end-all determination of how good a guy is. So think about it this way: Beltre can pound the ball. His home runs are down since the 'roid era, but look at the doubles. In Fenway Park, this guy can be another Jim Rice. And what did Jim Rice say about walking? It's for mailmen and street whores! Okay, maybe he only said the mailman part. We're just gonna have to get walks from somewhere else, but we won't think about that when the ball's flying over the Monster Seats.

It's like turning the knob down on Mike Lowell's age and up on his mobility. And the guy has won two gold gloves in the last three years, too.

Papi always wanted another bat. Looks like we may have gotten him one in the form of a fellow countryman.

[On NESN right now, 8:24 PM: A shot of Beltre in the dugout during a June 2004 Dodgers-Sox game at Fenway. Dave Roberts up for LA, just singled, McDonough and Remy talking non-stop about his stolen base ability. And a line drive was just caught by Kelly Barons, whose name Remy had to get from someone else at that point. And Roberts steals second.]

Pete Rose In A Yankee Hat 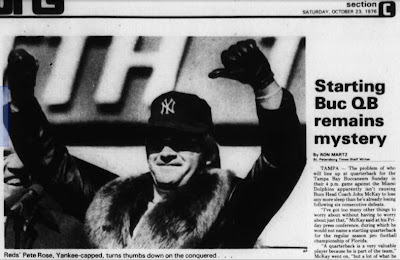 I thought he only bet on his own team!

Actually, this is during the Reds' '76 victory parade, and I guess Rose is wearing the hat in conjunction with a thumbs-down to imply "I am anti- this team." But still, so weird to see Pete Rose in a Yankee hat.

(I found this because I just got the book Game Six, and saw a shot of Will McEnaney in there after the final out of the '75 series. Problem is, the background is clearly Yankee Stadium, meaning it was the last out of the following year's Reds sweep over the Yanks, as McEnaney got the last out each year. But it seems like an awesome book, so I'm sure that's the only mistake. And I'm sure it wasn't the author's fault.)

Pics from the Legends Classic starring Kiefer and Tim Robbins in the post below.

You know that William Shatner interview show, the one where the seats are situated like the Love Toilet? Tuesday at 10, Weird Al will be on there, followed by Gene Simmons. Awesome. Check your local listings.

And take a shot at the latest Kwiz.