Ghostbusters back in theaters!

I'm pissed that we got swept by a last-place team, I'm pissed that the Yanks didn't lose this afternoon, and I'm pissed that yet another Mac has died on us. The last three I took to the "genius" bar only to receive the following diagnosis: "I don't know." So hopefully I don't lose thousands more pictures. In the meantime, it'll be less computer time for me. But I've kinda been thinking about doing that anyway, as the Internet stinks now.

Today's one of my early days so I had to go to bed with the Yanks tied in the 9th at home. I dreaded waking up to a story about some previously unknown infraction by the A's allowing the Yanks to win without the benefit of batting at all. So I woke up, went to athletics.com (I always like to go to a friendly place when getting Yankee results), and saw the beautiful news: Old friend Brandon Moss hits his second dong in the 10th and the Yanks lose! They're getting really close to a Drew-ish panic move of their own, though one could argue that move has already been made: the decision to keep Jeter's grandpa, er, Jeter, on the team.

So last night ended up not being so bad after our failure.

Did you see what I did with the post title? It's an A. Because A's.

A long-ass winning streak has to end*, so it might as well end at the hands of my ol' fave, Justin Masterson. Which doesn't mean I'm not pissed that in the first inning he seemed to have nothing and we looked like we were about to take a huge lead, only to somehow not score at all for the entire game.

But let's not talk about that when we can talk about Derek Jeter thinking a ball was foul tonight and making a fool of himself. He was about to give the ball to a fan when finally he heard the screams of his attention-paying teammates. By then, the batter was on third base. Video here. (Click on "Seager triples to left.") I love how he almost made an accidental catch off the deflection, which would have gone down in Overrated Jeter Lore. Instead, just another mental mistake in his final Tour of Mediocrity. (But, of course, he never, ever makes mistakes--this was his 0th one but it also didn't really happen.) I'd also like to point out that even if the ball had been foul, look at how long he was just walking away from the play and chatting with fans, as if the game was over or something. David Price could tell you that's called "thinking you're bigger than the game." But that would have gone unnoticed. The fact that he fucked up the whole play won't, so it's a win for us.

Speaking of the Yankees, I feel like Lovitz-as-Dukakis in that debate with Bush: "I can't believe I'm losin' to this guy." It's ridiculous that we're behind that horrible team in the standings. I guess that's what a 10-game losing streak will do for you. We have to get ahead of them and move on with our lives, and leave them in the cellar where they belong. The only negative in their 10-2 loss to Cano and Co. was when Felix Hernandez mistakenly said there's "a lot of history" in the five-year-old Yankee Stadium. How embarrassing! But not as embarrassing as assuming a ball is foul and walking around and talking to fans while the other team runs around the bases.

*And usually does when you inject a dose of Drew (either one) into it.

Everything Coming Up Milhouse, Until Drew Is Forced Upon Us

Six games ago we were six games behind the Yanks. Now we're 2.5 back as we win our 7th in a row and sweep the Rays, while Robertson blew the save at home against the Twins.

Dave O'Brien continues to talk about Drew as if he's this Christ figure ready to return and save us, even going so far as to say he makes us better in the "long run." He acts like he's a beloved clubhouse figure too. It's as if Drew paid him lots and lots of money to say this stuff. Still such a shame the media reactionarily* signed this unwanted player, ruining the careers of both Will Middlebrooks and Brock Holt for a few months of mediocrity.

*may not be a word

"How About Six? Six Is Good. You Got A Problem With Six?" 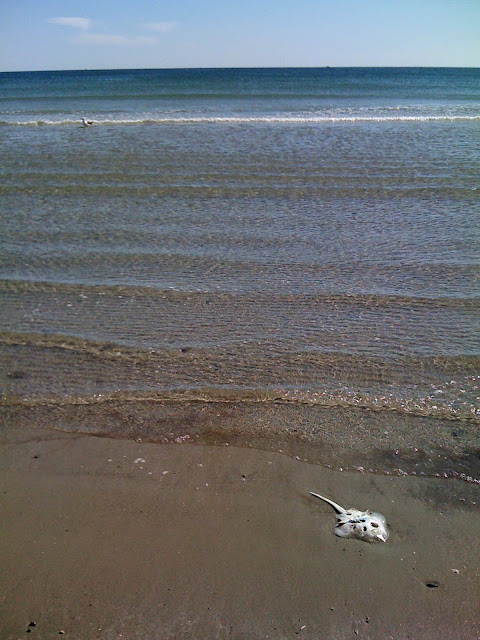 Took this pic at the beach today. I just thought it was cool how this thing looked like a Jason mask. Only when adding it to this post did I make the "dead ray" connection, as we've sent them to their fifth straight loss with our sixth straight win tonight.

Herein lies The Rub's stats: 7 innings, zilch. JaBraJu and BroHo donged for us. 7-1 final. O's, Jays, and HilterBinLadenHybrids won, so standings stay the same except for the dying Rays.

And anytime we get a nationally televised home game, we get that gorgeous old CF camera angle, where you feel like you're on the same level as the players, just behind and to the side of the mound, with the action taking up a lot of the screen in living color, instead of NESN's shitty moonshot.

May did not go according to my plan, but ending the month with a seis-gamer is encouraging, so we'll have to shift the May plan to June.

Contest entries will be revealed at 12:14 PM today. Then it's Sox/Rays at 1:35. Then we head to Ohio, Michigan, and Maryland for 9 games.