At Least Something Good Happened Today 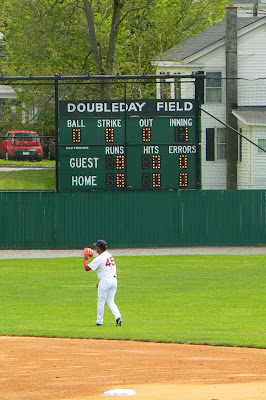 More on this later.

The Contest Prizes Have Arrived

Bad time for Lester to bed-poo, eh? Moving on, here's the prize(s) for my current contest. (Pac-Man bandages not included.) 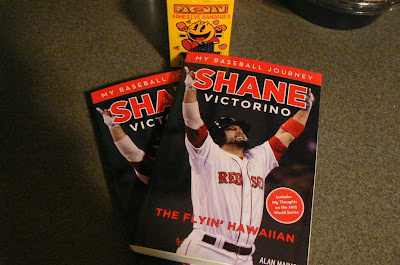 The basics: Predict how many runs Shane Victorino will score in June, and the amount of runs the Red Sox will score in June. Send to Two2067 at aol dot com, or comment below. Predictions will be revealed after the May 31st deadline. Winner in each category gets a book, compliments of me via Triumph books. (Full contest details here.) Terrible job by me cutting off the author's name in the pic. It's Alan Maimon. I am, of course, not paid to do this, I just like contests and I like Shane Victorino, so....

Below is a video I shot a few days ago. I work in Newport and the main beach there is called Easton's Beach. Which is known as First Beach. I was driving near there, when suddenly, flames! There are much better video and pictures than this online, but this is what I saw:

Turns out if was spontaneous combustion, a la Spinal Tap. Nobody was injured, but they quickly demolished what was left of that building.

Left: Guy shows/rubs one nipple at Fenway tonight. Right: 15 minutes later, on the Cubs-Yanks game on WGN, another guy (the same guy????) shows nipple at Wrigley. Coincidence? I mean is this a pre-planned thing, is May 20th National Nipple Night? Is it coincidental that the first guy showed his left nipple with a righty up, and the second guy showed his right nipple with a lefty up?

Anyway, we totally lost. After being down 6-0, we cut it to 7-4, and had some more 2014 trademark moments where we're almost about to do something and then get robbed on some type of crazy inning-ending double play. In the 9th, Papi was up as the tying run and hit a major bomb down the line that had Drinkwater and everyone else thinking we'd tied it up, but it went just foul, and about negative 2 pitches later everyone was in their cars.

The good news is that the Yanks are down big in the 7th at Wrigley. Looks like Tanaka will get his first loss in 27 years. Hopefully this starts a nice long bed-shitting streak for that dumb butt.

Oh and more bad news, Stephen Drew has finally made his way back to the Red Sox. I heard the news at the beginning of the radio broadcast tonight, just before I got home. As I'm sitting there with slumped shoulders imagining the inexplicable lengthening of the Drews-era of Red Sox history, Dave O'Brien starts telling me how the mere news of Drew's return has magically given the clubhouse a boost and that you can just feel his presence already, as if we were talking about some sort of good player.

Was about to publish this, but figured I'd check GameDay real quick for a Yankee update just to make sure they haven't had some crazy error-ific comeback, and I see this:

"What a shock!" --Phil Conners

Update: Yanks lose as Jeter ends game with bases loaded, and then the Cubs station shows 9 straight seconds of his back. Had he gotten on, Ellsbury would have come up with a chance to go 5 for his last 50! (He's also 2 for his last 31 (.065).) Too bad it's been burned into everyone's mind that he's having this great season and that he's on a mission and hell on the basepaths and all that crap--guy had a good month, and that month was about a half a month long. He's been shitstink ever since. If he was hitting .340 the last time you checked, check again. Spoiler: it's below .270. Part of me wishes the bad part had come first, so he would have had to hear the boos and feel the pressure, but I'll settle for him doing badly now.

There's an updated version of the book "Shane Victorino: The Flyin' Hawaiian" out, and here's your chance to win it. Predict how many runs the Red Sox will score in the month of June. And predict how many runs Shane himself will score in June. The closest in each category will win a book. TPIR rules* in effect for tie-breakers only. E-mail predictions to the address I've been rockin' since '95, Two2067 at a o l dot c o m. Deadline is May 31st. I'll reveal all the predictions on June 1st-ish.

For those who want to put in a guess real quick but don't want to go looking up the average amount of runs teams and players score in a month, I'll just tell you that last June, the Red Sox scored 156 runs, and Victorino scored 12 in 20 games.

Good luck. And I really hope for your sake the guy from the publisher was serious about sending me the books....)

I'd been anxiously awaiting the announcement of the Bryant Park NYC movie lineup, and today I see it came out five days ago! So all of a sudden, it's summer. And now, in the yearly tradition, I "shall" live-blog my own reactions to each film as I reveal them in my browser window:

June 16th: Saturday Night Fever. Solid start! Music, dancing, liberal use of the "c" word, this film has it all! I'm already imagining the kinds of outfits people are gonna wear for this one. And the blanket-finders will probably be mirror balls on sticks.

June 30: A Soldier’s Story. I don't....even...not familiar. Let's just get to Ghostbusters and stop effing around, please.

July 7: Blazing Saddles. I like it and everything, it's just not way at the top of my list like it is for some people. Wouldn't mind seeing this one outside with a big crowd.

July 14: Suddenly Last Summer. Wait, that Motels song is named after something?

July 21: National Lampoon’s Vacation. Woohoo! An all-time fave of mine, of course. As of now, this is the one I'm definitely going to. We'll see if anything tops it. I'm still hoping for Ghostbusters, what with it turning 30 and with Ramis just dying. If that's not the finale....

July 28: Key Largo. This is, like, Bogey and Bacall and whatnot. Never saw.

August 4: The Karate Kid. My friend who I've known since high school recently wrote this: "Mike’s admission of having never seen Youngblood was mildly shocking, but Jere having never seen Karate Kid seems almost impossible, and causes me to question other assumptions I have about the world." Yeah, that one was right in my wheelhouse, but I just never went, and then never rented, and then somehow I've only seen very short bursts when it's been on TV. What do you want me to tell ya?

August 18: The Shining. Whoa, ging-ga!!! Another absolute Jere classic! And "everyone else" classic. Okay I think I'm making two trips down there this year. Holy shit, the goddamn Shining, I gotta believe Kim's coming with me for this one. Best summer ever! I wish it were August 17th right now. "French fries and ketchup"! (Name the scene....)

And as I scroll, I see there are no more. The Shining is your closer. Which reeeeeeally makes up for the fact that there's no Ghostbusters. Ya know, I absolutely give this lineup an A, based solely on the following: It starts with SNF, it's got Vacation in the middle, and it closes with The Shining. Bravo, Bryant Park movie deciders!!!!!

Check out the poster here.

The Weekend That Turds Built

Four games ago, only three teams in the league had more wins than we did. Now eleven teams do. But we're still only 3 games out of first! Tonight we got swept by Detroit and we now have our first 4-or-more-game losing streak since 2012. The key inning was the 5th. We were down 4-1, loaded the bases, and got a little grounder to third from Napoli. The dude throws home for the force, but it's low, and the catcher can't handle it. Took the announcers FOUR looks at it to figure out that the catcher had it in his glove but didn't realize it and it fell out. So it's 4-2, still loaded with one out, and a liner back to the box is turned into a double play, and just like that the threat is over. Tigers then pulled away. Effin' sweep.

Roughly a year ago, on May 14th, we were only 4 games better than we are now, were the same amount of games out of first place as we are now, and had gone 2-8 in our last 10 games. And we went on to win the World Series. The difference this year, though, according to John Kruk, is that the players wear big colorful shorts in the locker room and also somehow weren't in there when he was before the game. So fuck us, I guess.

Jackie's natural. If they showed it on ESPN tonight, I missed it, so I'm glad there are pics online. Of course I saw him with it sticking out the sides, reminded me of Reggie Smith.

So I guess Castiglione was out because his wife Jan was in a car accident. Good to hear she's recovering. Joe is back in the booth.