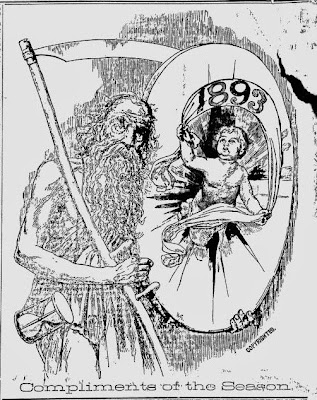 He'll Always Be Double-C To Some

Everybody keeps wondering about the health of Clay Buchholz. Will he ever bla bla bla..... I think the more interesting question is, When will the major Boston sports media outlets finally learn how to spell his name? 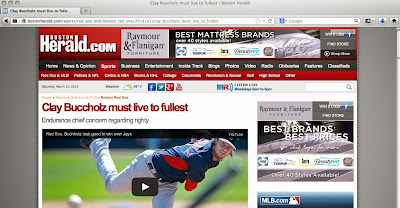 Its been almost a decade since we drafted this guy. What's the trouble here? It's not like "oh I grew up with ten people named Buccholz in my school so I just keep thinking it's double-c and not double-h." But even if these people just can't get it into their heads for whatever reason, why not just have all the players' names at the ready, already spelled out, so you can just copy and paste? In the above case, maybe it's strictly the headline-writer's fault. But couldn't that person have just looked at the article, grabbed the name and stuck it in the headline?

From today on, pretty much every Red Sox game will be on TV. Exception: Next Wednesday's SS game against the O-faces.

I don't see this ending well for 1910. Babies should never be pilots. 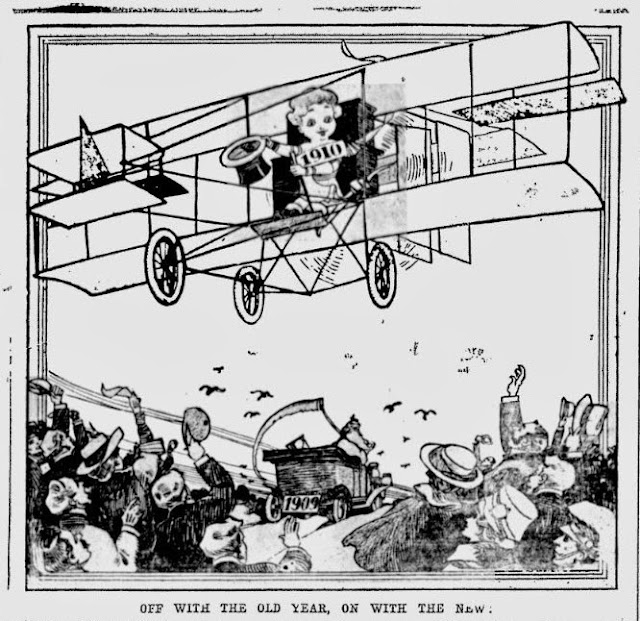 Newspaper credit: Might have been the Bayonne Herald, I can't quite remember. But I'm guessing the artist won't mind in this case.

It just hit me like a Tobby Squobby. (Ton Of Bricks = TOB = Tobby = oh forget it...) You know how all the fans in the back of the Fenway grandstand (standing room and the last few rows of seats) can't see the center field videoboard because of the overhang? And you know how all of these people CAN see the TVs that are up on the poles that show the game? Why not use these TVs as a "scoreboard feed" for things like ceremonies and whatnot? Every once in a while I'm in the standing room and all of a sudden everybody's clapping and I have no idea why, because they're reacting to something on the board. For the 100th anniversary game, I was in the Monster SRO and couldn't see the board, which I later found out had players names up there. (Nobody was announcing them over the PA.) Basically, any spot that can't see the board should have a monitor in view. (I've also wondered for years why there isn't a board facing the thousands of fans who have it behind them, aka "the bleachers.")

Play around with this, front office.

P.S. Yes I realize that during a ceremony those TVs probably have NESN on and you could just look at that feed, but the small captions on a TV aren't even readable. And yes I realize you should be looking at the field anyway, but I'm just talking about using those TVs as a supplement to what you're watching on the field, the same way the CF board is a supplement. To what. You're wat. Ching. And there are other things--like how they show the results of the 50-50 raffle up there, and some of the between-inning stuff that isn't commercials. Like trivia and wacky bloopers. 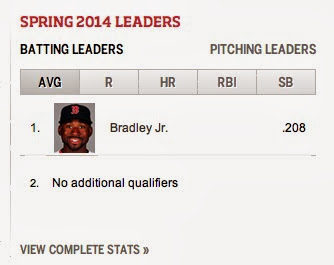 On redsox.com, there's that area where you can see the current team leaders in a few different categories. If you click on "AVG," you see that apparently Jackie Bradley is the only Red Sox player to have batted at all this spring.

I saw an ad on redsox.com for personalized jerseys, which are in the '70s pajamas style. You can pick from a giant list of Red Sox players, from well-known to obscure. I thought maybe the list was comprised of players who wore the PJs, but it's not because you've got guys like Boddicker and Brunansky, as well as pre-jammies guys like Ted Williams. But not Babe Ruth. So I don't know what's going on there, but I'm wondering, will this coincide with a possible 70s throwback game this year? I'd be all for it. (As long as we've crossed the line into sometimes wearing throwbacks anyway.)

Remember when I said I thought I'd go to Opening Day in Baltimore to see the Red Sox? And how it turned out tickets for that game were ONLY available to season ticket holders? Well I had hoped they'd eventually release some tix to the general public, but no. The O's ticket office said that it's true--all tickets sold for that game go to season ticket holders. But he did try and sell me on a plan which means tickets ARE still out there, and what will they do if they don't sell all those plans? Never trust a ticket office.

I'll keep you updated, but I will say that I may be about to blow the doors off of a league-wide sc....well, I won't say anything yet.

PS Any one of you could make this much easier on me if you just give me three tickets to Orioles Opening Day out of the kindness of your heart. Thanks! I owe ya one!

Funny video, prepare to like it now but hate it later:

Something New And Something Same-Old Same-Old

Nebrasketball is back! Though it was never really there.... A court-storming win in Lincoln over a top-ten team. This new gym has really made a difference. It'll be weird watching the NCAA tourney this year knowing my team is actually in it for a change.

Nice job by HH today facing the minimum over three innings. When doing my usual search to see which news outlets still can't spell "Buchholz," I came across one guy who wrote:

Admit it, though. You know it's spring training and the games don't matter, yet you're starting to get a little nervous.

Wow, I was wondering what that unbearable feeling of dread and doom in my stomach was.... Of course! It's my nervousness over the world champion Boston Red Sox on March fucking 9th! Who hires these people? This particular writer claims to be a fan of the team for 50 years, so I guess it's another dinosaur who will never stop worrying no matter how many championship banners go up the pole. (He's also the type of person who writes things like "Patriot's." I mean take a look at the goddamn logo if you're confused as to whether your team's name has an inexplicable apostrophe in it.)

Figured I'd check out some of the guy's old articles, and I see after two games he wrote:

Thank goodness it's spring or Red Sox Nation would be in panic mode.

I think it's safe to day after three titles in ten years that this shit is never going to end. I wish the guy would say something like "Thank goodness it's spring or Red Sox Nation would be told by the ratings-hungry media members who cover their team that they're in panic mode." That I could get behind. I'm not going to link to the guy's stuff, but I'll tell you his last name is Snowdon. And it's time for him to get deported.

Here's another shitty thing: You know how on the schedule page at redsox.com, each date shows what network the game is on, and on each completed game you can click the score to see a full box score and other game info? Why the balls can't they do that for the March games? I know I can find this info elsewhere on the site, but it would be nice if they'd just do it like they do with the regular season games. Especially since a lot of the games aren't on TV--we need to know if we're going to be seeing one or not.

This Week's Obsession Continues (As Does The Lie)

To recap: Guy from Sun-Sentinel claims Red Sox had only 2 players in their lineup with past major league experience in recent game. I immediately check box score to see that the number is actually three, plus the starting pitcher, and blog about it. Other sources pick up the error without checking it.

Next round of stories about the Red Sox' apology emerges, all still running with the error.

And now, a third round emerges as John Henry tweets about the Marlins, and guess what? We're still hearing lines like

Just two players in the Red Sox lineup that day had MLB experience.

from USA Today and

Note that these aren't quotes from the original article (which would still be bad as long as they didn't note the facts were wrong), but new writers putting the original error into their own words, just like in the first and second rounds of stories.

I mean Jesus, SI, there aren't even nine position players in baseball to begin with. There are eight, plus a pitcher and a DH, for a total of 10 players in the starting lineup, and the Red Sox had four with MLB experience, and they all played at least three innings in the game in question. (Which still might not meet the supposedly vague guideline set by MLB, but four is twice as many as two.) But they picked up that language from the original article. I feel like these people would pick up and run with a story about a scandal that rocked the Chicago Whales' locker room, without first checking and finding out that there's no such team. This isn't quite revenge on SI for Sidd Finch, but the principle is the same.

Brandon Snyder is the guy who really gets screwed here, as he went unnoticed by both the original writer and the countless others who don't check facts before perpetuating myths. I tweeted to Brandon and he was kind enough to write back: 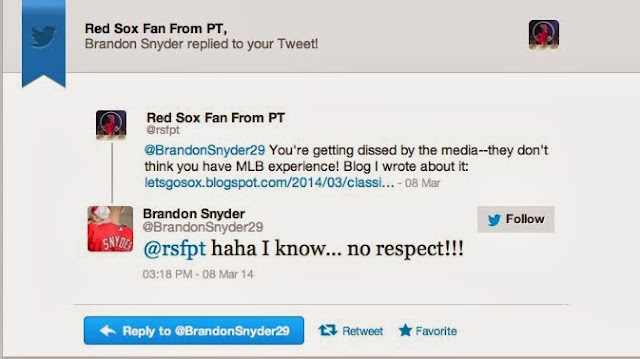 I have also tweeted to the writer of the USA Today article linked above, we'll see if he does anything.