Pettitte didn’t admit to drug use because of some crisis of conscience, or because it offended his sense of morality, or even his Christian beliefs. He admitted to drug use for the same reason A-Rod did: Because he was caught.

Hey, sounds like something I would say. And have said.

I listened to Andy's press conference on the radio yesterday and I could swear I heard him say he never cheated. Hm. I found an article with quotes from the conference and you can read it for yourself. Sounds like his buddy Bill has been coaching him in the art of Costanza. It's not a lie...if you believe it....

In closing, am I the only one who always thinks of this scene when I hear the word "Pettitte"?

I wasn't able to be there, but I got to watch the celebration on TV. Boston Red Sox, 2013 AL East champions. Easily. The top of this post from the pre-season on Joy of Sox tells you what the "experts" thought the chances of this were.

Well, I've decided not to go. It's 9:00, I just got home from work, the game's 4 innings old, I'm an hour from Boston, and we're wearing sunglasses. I called the team today and they said the cutoff for entering the park would be roughly 9:00. So between that and the fact that the game is still in doubt and might even be over by the time I get there, it reaaaaally might be a wasted trip. So I'll let others enjoy the fun. I hear my cousin Amy's in attendance. Hopefully she takes a lot of pics. And sends them to me.

"x-Boston"! Big Lack went all the way tonight as we uh-fish clinched a playoff berth, and with the Rays loss, a tie for the AL East title. The bubbly will be broken out with one more win or Rays loss. We're 3 up on best record, with the A's late result pending.

I was about to say, NESN has actually improved lately when it comes to spelling, but tonight they made a classic mistake: 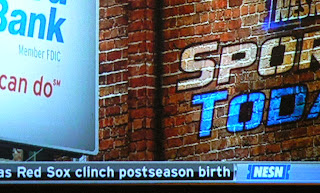 And check out this "Tsarnaev is a bitch" shirt in the front row tonight: 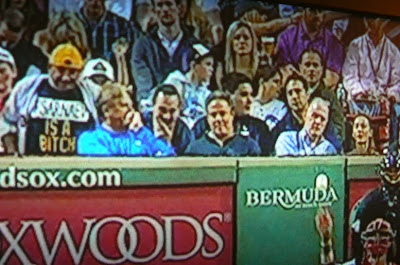 (Did you spot Varitek in that shot, too?)

Yanks drop two of three! In Toronto! A beautiful loss tonight has put them 4 back in the loss column with 3 teams to pass and 9 games to play. The Jays come to Boston for the weekend.

Well, somebody has to say it: Buick and Royal Caribbean are using the same song in their ad campaigns right now! Something's gotta give!

Shades Of That Crazy Night In '11

Crazy. At one point, the Rays were down to their last strike, and we had the winning run at second with one out. Within about 5 minutes, the Rays had tied it, and we didn't score and then let the first two O's get on base. All this stuff was in extra innings in both games. Was going back and forth as the Rays were on ESPN. After that it was still possible to get one game going the right way, or even two, but we end up giving up a seeing-eye single, and the Rangers get a big squander, and both ended up wrong. So there's no chance at a division clinch tomorrow night. Which is what I was really hoping for. I work till 8:00 the two nights after that, about 1.5 hours from Boston, so I doubt I'll be part of a bubbly-bration now. But maybe I'll work some magic.

And all this happened just after the Yanks snuck by Toronto.

But with Cleveland's loss (they again miss a chance to move into a WC spot), at least the magic number to clinch a playoff berth is down to 1.

And the positive about tonight's loss is the classic "it hurts the Yanks" as Balty stays ahead of them. The other positive being that we've got this thing locked up so who the hell cares.

Oh and Oakland blew it tonight so we stay 2.5 up in the best record race.

Our loss and Toronto's win mean the O's move 1.5 up on the Yanks. Balty is one of three teams NY has to jump to make the playoffs.

Tampa lost so our magic number is down to 3. Which means we can't clinch the division tomorrow. Which is good since I'm rooting for the Thursday night celebration. So tomorrow we need either a win or a Tampa loss or both to have a shot at it on Thursday. Both would be preferred.

I love it! I'm happy to say I'll be at the first playoff game at Fenway since 2009! I was at that debacle too. Pictures here, with awesome typo toward the end.

In the battle of the two shitty teams who for some reason still hold both wild card spots, Tampa wins, so Texas finally drops to #2. Cleveland had a chance to join the winner of that game as one of the 2 WCs, but lost. But that loss was to KC, who therefore ties the Yanks. So it's:

Magic number for division remains 4. But us losing (since we play Balty) and Tampa winning this week are two things that hurt the Yanks, so let's just say I won't be too upset should it happen that way. And let's just say I'm also being selfish since I can't go to Fenway Wednesday but I could Thursday, so a slight delay lets me see the clinching fun. It's all gravy in the us department, the goal is keeping the Yanks out.

Okay, it's not all gravy, we still need to get that best record. But Oakland helped us out tonight--we move to 3.5 up on them assuming they don't come back from 9 down with 2 innings to play.

Meanwhile I'm still watching that incredible NL Central race. The Pirates and Cards are tied, and haven't been more than 4 games apart all season long. With the Reds kind of lurking slightly behind the whole way, too.

Nailed it! Sox sweep Yanks in rout on national TV and officially knock them out of the division race. Let's get right to the WC standings....

Tampa and Texas are trying desperately to go home early this year. Fortunately, Cleveland has come on strong, and Balty is back in front of New York. And KC is right on their tail. So we've got 5 teams to root for here. Gotta figure two of these bozos can finish ahead of the Yanks.

Now to our stuff. The magic number is 4. The lead for best record is 3. We've got 11 games left. It's lookin' good. We celebrate this week. And then it's playoff time.

Here's a vid I made:

Tonight we can eliminate them from division contention! (Officially.)

So what's up with playoff tickets? In recent years, they started the process way earlier. (At this moment I check my old e-mail to find that in 2009 I got the "register now for the chance to buy postseason tickets" on September 15th, which is TODAY, so maybe I'm way off on this. But as a 10-game plan holder I thought we got our ALDS purchase opportunity earlier than this. I don't know, whatever, it'll be soon. Am I still in parentheses? Anyway, I'm pissed that they gave some to Ass Tickets before they're available to anyone else.)