I had on some baseball highlight show last night and saw these fans in Arizona doing whatever it is they're doing. And my question is, What the Crud? What's going on here? The middle guy seems to be in a trance. He looks like my friend Tom Perkins, and fittingly, I could see Tom doing this leg-slap move at a punk show, transfixed by the drumbeat, playing along on his thigh, not wanting to go too crazy knowing the rest of the crowd isn't slamdancing yet, but wanting to let everyone know he is indeed "into it." The only thing missing is his other hand acting as the snare drum, slapping himself up high on the chest.

He also has a towel around his waist, but they are in the "pool area," so that makes sense. Though a pool in a baseball stadium does not.

And what's up with the blonde? Does she have a question?

Is that Bob Odenkirk on the left?

In summary, What the Crud? Is this some special dance they all do out there, like the Oakland A's headbanging thing? The whole thing seems staged. Obviously they knew they were gonna be on, and they all started doing their special "trance beat"/"hand-raise"/"look like Odenkirk" dance on cue. Any ideas?

I had assumed the Yanks lost 10-1 (CC got shelled again), then I got in the car to make a sour cream & onion chips run for Kim, and I heard Sterling talking about the tying run! In the cruelest of ironies, he was saying how they could get said tying run to the plate IF ALFONSO SORIANO WALKS. Silly Sterling, don't you know anything? Now I admit I had to check the stats to see if maybe our old friend had turned himself into a walk machine over in the N.L. Yeah, no, he didn't do that. (Though I thought it was hilarious when they said he's out-homered the entire Yankee team this month.)

So "Sorry Asshole" swung at the 3-2 pitch and nearly ended the game with a double-play ball, but they only got the one out. I went in and bought the chips, and when I got back, I got to hear whatever other Yankee it was make the final out. They had been down 10-1 in the 8th and lost 10-6, leaving two men on. So that was kinda of a bonus, since I'd already conceded first place to the Rays. This way the Rays show a little shittiness, while the Yanks get to think they'd have this amazing comeback, only to fall short.

Meanwhile, in Baltimore, our game, much like the original run of the Sex Pistols, was over as quickly as it began, but unlike said original run, Lackey lacked filth and the Sox offense lacked fury. So the standings are:

And how sweet is this A-Rod stuff? Again, I keep hearing things like "sad for baseball" and "boring/sick of it." But I say bring it on. Endlessly entertaining and smile-inducing.

Sox Remain In First With Non-Game

Rained out tonight. Briefly watched Orsillo and Bradford, and Bradford said, "everybody's panicking." It's funny how these media guys live in their own world, probably made up of "Twitter followers," and think that's the actual world.

Another Crazy-ish Night, Kinda, In The A.L. East

Again a pitcher shuts us down for nine innings. They got their early runs on weirdness. We never recovered. The lead is a half-game. TC said the A.L. East is "as tight as ever." The guy knows we weren't even in first place a few months ago, right? Anyway, the O's, Yanks, serial comma, and Jays lost, so they all stay where they were.

Without further fest doo-doo, here's a video I made. Below is a text description in case you can't watch video or whatever.

Basically, two games ago, a Rays pitcher made a snap throw to first. It looked like his hat fell off. Remy noted this but instead of getting a replay of the pitcher, we get one of the runner getting back to first base. They never showed the correct replay, and they never spoke of the play again. That alone is funny--classic NESN, doin' it wrong. But when I rewound, I noticed that the pitcher, after stepping off the rubber, actually took his glove hand out of his glove and started to take off his hat to wipe his brow. Meanwhile, the ball is still in the throwing hand, with the glove resting on top of it. Without warning he just throws the ball to first, letting the glove fall to the ground, like a mobster shooting a stoolie through a brown paper bag. Or one of those flower boxes. The other hand on the hat was the distraction--it looked like he was taking a rest, just wiping the brow. Then boom, he throws to first. I also noticed that earlier, he had done the same thing, only without the throw. Just leaves glove resting on ball-in-hand and removes hat, wipes brow with sleeve. I should also point out that maybe this guy is famous for this move and I've just never noticed until now. I should also point out that it's not a balk because he steps off the rubber first. I should also point out that all of these cheesecakes were very delicious.

Crazy night in the A.L. East. Sox have nail-ass-biter against the Rays, it's not secured until we put up three insurance runs in the 8th for the 6-2 win. Thornton, Tazawa, and Uehara give up zilch in relief of Lester who only gave up 2 over 6.333333. We extend the lead to 1.5 over Tampa. (My 10-5 prediction for this game? I give it a B-.)

Baltimore had the tying run at third with nobody out in the 9th, but somehow can't score. They lose to KC 3-2 and fall 3.5 back.

And the Yanks' neighbors to the south had an 8-3 lead at home against the Dodgers after six, but lost 10-9, leaving the tying and winning runs on base in the 9th. The pre-season faves are now 14.5 behind.

After jumping up and down for a while, I started filming as Napoli was about to reach home plate on his game-winning dong Sunday night. Enjoy.

Tonight it's a battle for first place, Lester v. Hernandez. Should be a 10-5 win.

Less Of That, Moore Of Something Else, Please

Moore was a male dominatrix tonight. That's one where you tip your literal cap and move on to the next night. And look at the positive, which is that the workmanlike one wasn't too shab-tastic. And also the fact that if you'd told me in March that the Rays would have a 21-4-ish streak in July and that at that point the Red Sox would be in first place, I'd have said, "Dude, why are you making up these oddly specific stats? Are you from the future? This is just really fishy, that's all I'm sayin'. No no, I know, it's, no... I'm just... it's cool. But if it turns out exactly that way, I'm gonna have to kill you."

Yanks lose so at least we stay 7 up on them. It's a half on tamper and tuna half on the boyds.

Bad job by YKW on that Escobar at bat late in the game. Crowd was booing him, then cheered as he got brushed back, Remy finally says something about it, and Don surmises that it came from when "a foul ball went in his direction and he did or did not give it to the fans." Uh, I'm guessing he didn't or they wouldn't be so pissed. So then it goes on like that and they never show what originally happened and they never bring it up again despite that it's an ongoing story. Then it gets to 3-2 on him, but they forget to put ball 3 up on their graphic. For a long time. Then it's ball 3, but it's really ball 4. So all this stuff went on but it was almost as if Don and Jerry were busy with other chores the whole time. Does anyone know if the initial incident that caused everyone to get pissed was shown? I missed it if it was. I just boo him because he's a homophobe.

P.S. My pics from that sweet Sunday night game will have to wait another day. It's 2013, so by now it's already old news, but don't be a texting tween, just look at some three-day old news, take a few minutes, and enjoy it. You won't miss anything going on with the Kardashians or your "friends" or whatever. If you do, you'll be better off anyway.

Was at the game tonight with Kim and my mom & Charlie. I actually captured "the moment": 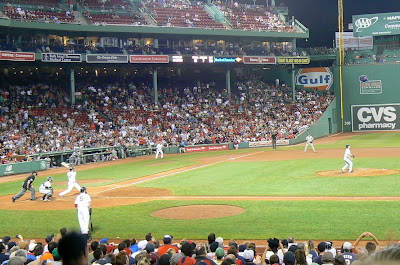 of Napoli's second dong, which won it for us in the bottom of the 11th... 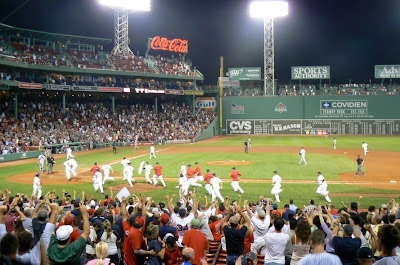 Sweet ending to a pretty crazy back/forth game. Life is good when you send the Yanks packin' in heartbreaking fashion. I'll post more about this game Monday night.

Kur was good today. We still coulda won and whatnot. Man, this is a really bad blog post. They're usually better. At least I got this cool lightning picture tonight: 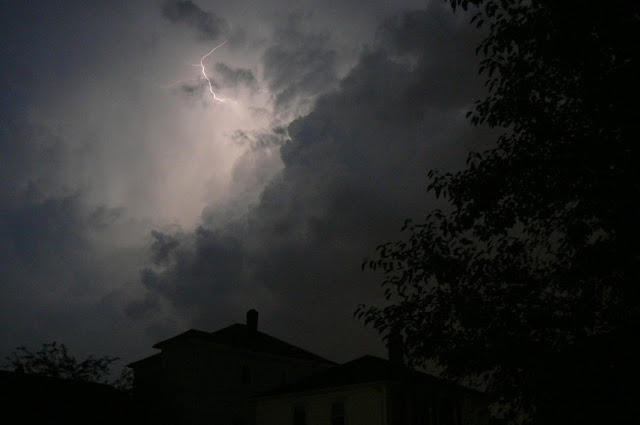