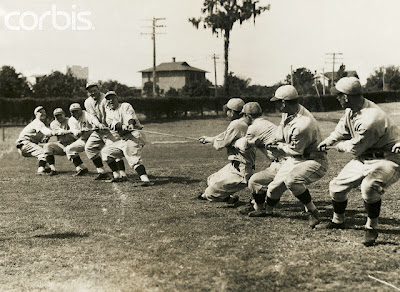 Ten Phillies have a tug-o-war at their training camp in Winter Haven. Year unknown. 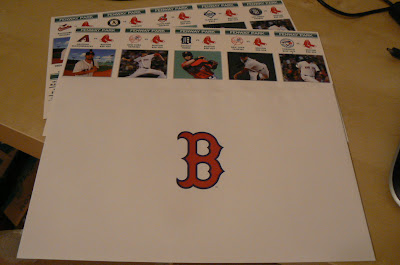 "You Smith?" It was the mail man. One I'd never seen before. Definitely not that Yankee hat-wearing girl who kinda looks like a guy. I was rolling out of my driveway on the way to work, and he was nice enough to flag me down. He had a package. From Yawkey Way. Oh yeah, I'm Smith. Those two words mark the, okay, one of the many "official" beginnings to what will be an historic 2013 season. Above, the unseparated tickets peeking out from behind another envelope which contained some discount coupons, as well as a card explaining how to separate your tickets. I can't imagine anyone needing that--especially since there's no longer any perforation lines within the borders of each ticket--but better safe than sorry I guess.

There were no pocket schedules included, and as I said when I got some other tix, I've only seen a "schedule card" so far this year, so I don't know if this means the death of the pocket sked, but I don't think it is, as those things are prime real estate for ads and offers and stuff.

Anyway, this is the 10th year of the 10-game plan! I'm a charter member--I'll never forget hearing about it in that fateful '03-'04 offseason and thinking it was perfect, a bargain at $180 a year, at that point, per person for ten games in the bleachers. And then calling the ticket office from work, in Danbury at the time, and scoring that sweet spot on the edge of the bleachers. Back then, Pat and I would drive up to games; these days my mom buys half the plan and takes Charlie and/or my nieces/nephews to games, while I go to the others with Pat or Kim or whoever and then go to a bunch of other games too. Some of the original fans near us in our section are still going to games; some we've watched get pregnant and have kids. Okay, enough reminiscing about "the plan"--hopefully its promise of playoff tix actually comes into play this year!


*Variations I got: Victorino, Buchholz, Pedroia, Lester, Ortiz. Let me know if you get anyone else--or if you get any other pics on your non-season tickets, I've only seen the scoreboard one.

First Fisk, now Leskanic. And I don't just mean drunk driving, I mean "drunk driving and nobody told me about it so I found out months later and feel like an idiot for missing it." I was just at Joy of Sox, and was about to make my usual "Leskanic's performance was just as key as Dave Roberts' steal" comment, when I decided to Google his name. And I was so disappointed to see he was driving at four times the legal limit with his daughter in the car. That was September 2011. Later, they released cop-dash video of him failing the sobriety test. So, terrible job, Curtis, get your act together. You DO deserve more recognition for 2004, but risking your daughter's life among others is not the answer! 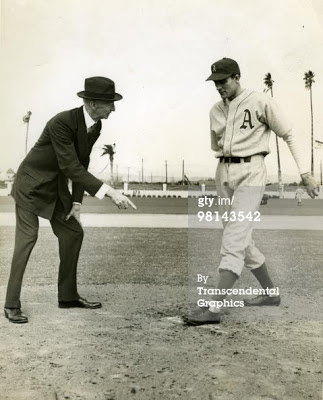 One of my favorite baseball facts is Connie Mack being the manager of the A's for FIFTY years. Another one is him wearing those suits. Here he is telling a pitcher how the hell to pitch 83 years ago. For people like my parents who were alive when Mack was managing, it must be weird to think it's been more than SIXTY years since he retired.

Red Sox on NESN tonight and Sunday afternoon. I'm getting excited for the season. Middlebrooks MVP, and we're gonna surprise some people. By kicking their asses. 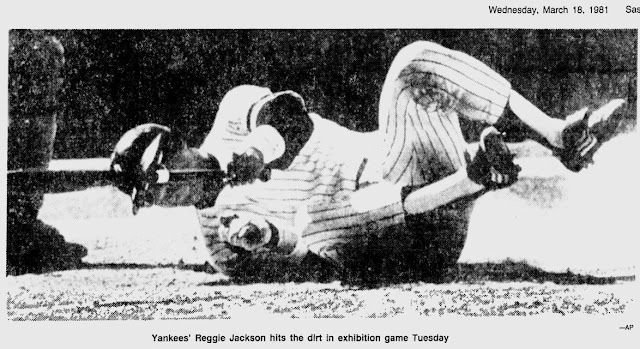 Always good to see Reggie on his ass. 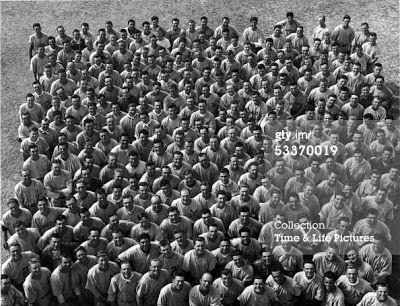 This picture was from a Life Magazine shoot at Dodgers camp in Vero Beach, Florida, spring of 1948. Good luck making that team.

If you haven't written to me with your snail-mail address, you have until...April 1st. At that point, all the prizes drop down to the next person. (BFiW and Ryan, I have yours. If your name isn't one of those two names, I don't have yours.) Thanks.

You know that thing modern athletes do where they grab the front of their own jerseys and hold out the team name? Here's the Little Professor, Dom DiMaggio, doing that to his brother Vince, in March, 1940: 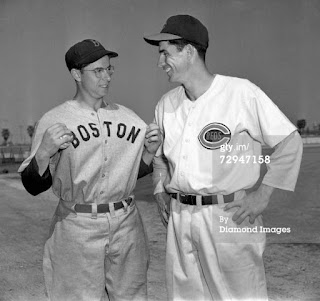 ("Random Past Spring Training Moment of the Day," for those who forgot, since I only said it on the first one.) 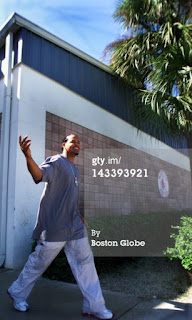 Now let's look at a classic Manny Being Manny moment. When playing in a game for the first time in five months after an injury, Manny forgot all about the fact that he might actually have to slide into a base:

“I sort of fell down [...] I forgot about that one. You don’t really practice sliding.”

Oh, that wacky Manny with his wacky hair, always forgetting how to play baseball. What a clown! OH WAIT, it wasn't Manny who said that, it was DEREK JETER, two days ago. Of course, nobody accused him of being aloof or un-classy or un-professional in any way.

Please be advised that your 2013 Season Tickets have been shipped via USPS Priority Mail. You should be receiving your package within the next few days. 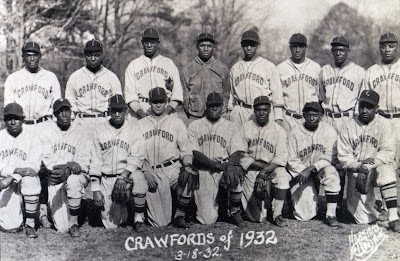 The Pittsburgh Crawfords, Arkansas, March 1932. Josh Gibson is in the jacket, and to the left of him is Satchel Paige.

Oh That Is Classic

Update: Here's an unedited video. No cameras seem to have caught that magic moment when Gilley does something to Aceves to piss him off. Aceves runs into the pile behind Gilley, then they cut away, then when they cut back, both men come from off screen, first Gilley, then Aceves running after him back toward the pile! That's when all hell breaks loose in that area as Aceves starts getting pummeled as he's held down.


Saw a scroll on the bottom of my TV about a bench-clearing brawl in the Canada-Mexico game. Why was I not surprised to see Alfredo Aceves's name pop up right after that?

"I had a hold of him, and I thought I saw Satan in his eyes," said Larry Walker.

After watching the oddly edited version of the brawl on MLB.com and reading some of the articles, it seems Aceves might not have done much except react to being blindsided, at which point he got his ass mauled by a pack of Canadians. Supposedly he doesn't have any major injuries, so that's good. We'll find out more about this fight soon, I'm sure.

Good to see the original Czech Brothers meet up with the Dick in a Box guys on SNL tonight....