Some new team slogans have started seeping in. I will keep updating them in this post. Any slogan that appears on last year's list will not be listed here--this will be for new 2011 slogans.

The Mariners have a clean slate all ready for the new slogan--I always look forward to what their marketing machine comes up with every year. (Not sarcastic.)

I'm gonna go through the Red Sox schedule and predict/guess/attempt to figure out what will happen in each series. Then at the end, we'll know what the record for the season will be. Of course, I'm sure I'll take the optimistic view of every series, and I'll end up with 125 wins. But I don't care, this is just fun....

April: I can never predict a series win in Texas, AL Champs or not. So I'm only gonna say 1 out of 3* here to start the year. At which point the media will tell us that "we" are "panicking." Then we sweep the Tribe in Cleveland. Then we take 2 out of 3 from the Yanks in the home-opening series. 2 out of 3 over Tampa. 3 out of 4 against Toronto. After Pats' Day, we leave for a west coast trip starting the next night. We sweep 2 from Oakland and split 4 with the Winged Dead People. I'll give the shOw's 1 in Baltimore. Then we split the final 2 of the month back home against Seattle. Now we add it up....

17-10. Sounds like a classic Red Sox April. We'll be in first place, and amnesic Yankee fans will talk about "yet another Boston choke" and Yahoo Sports will write an article about "why the Red Sox won't win the east" and many, many curses will be born anew. But then we'll win the east and make all those asses cry. Sorry, I skipped ahead. Next up, May. Duh.


*If we win game one, don't think I'm gonna sit here and be like, "we WILL LOSE these next two!" I'm just tryin' to keep it realistic--it kills me to predict the Red Sox will lose 50 times, but if that happens, it means one of the best seasons of all-time, so...

I was excited for Portlandia as soon as I heard about it. Fred Armisen's been entertaining me on SNL for years and is clearly a talented dude. And Carrie Brownstein was a member of one of my all-time favorite bands, Sleater-Kinney. Would a comedy show made by these two work? I didn't care, but I obviously had high hopes.

It's easy to make fun of things you hate, but the people who make this show poke fun at themselves and a lot of the things "my generation" are into. The show takes place in Portland, but it could be about any progressive, coffee-shop filled area. The first bit on the first episode set the tone for the whole concept of the show: a video for a song called "The Dream of the 90s is Alive in Portland." From there they've gone on to make fun of the extremes people take their lifestyles to. For example: I love the fact that we "adults" have said, "we liked playing kickball as kids, let's form leagues and play as adults." But at the same time, this concept is dying to be made fun of by the very same generation it's geared toward. Would I play hipster bocce in downtown Providence if someone invited me? Sure. But do I make fun of those same people as they play in front of me while waiting for the outdoor summer movies to start? Definitely. (While some other passerby makes fun of me for watching an outdoor movie, and on and on....) So on the show, one of the skits they did was "adult hide and seek," which took place in a library. The old lady telling the 20-something to get a job as he hid under her chair was priceless.

As someone whose girlfriend is in the "craft" world, we get to spend a lot of time seeing the amazing work of unique, creative people. But also, duh, we get to make fun of a lot of incredibly bad "art"! One skit in Portlandia has two crafters improving every knick-knack they come across by simply "putting a bird on it." Brilliant.

It's basically just a great look at certain fringe people and how they view and are are viewed by "normal" people. Every stereotype gets taken on, from feminist book store owners to bike messengers to dumpster divers. All done benevolently by people who most likely have lived the life or are close to those who do.

And the musician/comedian star power of Brownstein and Armisen brings a lot of cool cameos to the show. Along with great music and comedy, of course.

Here's their site if you want to check out some clips.

I'm sure you know the lottery has started for the Cubs/Yanks/Monster/etc. games. You probably won't win, though I have definitely won before. But the key to getting tickets to those games is reading the last section of this press release. Note: this "phone sale schedule" section doesn't even appear on the actual page where you enter the lotteries. So any lottery you don't win, you should be ready with phone in hand at the right time. I've gotten the special tix this way more than I've won the lotteries. I mean come on, I have at least one Monster game every single year (from the team ticket office, face value). That's not a coincidence!

The Hauls of Shame blog continues to do great work exposing that collector/Yankee fan Barry Halper as the fraud that he was.

Kelly O'Connor is all over this Truck Day article! Nice job, Kelly.

Bonus points if you know the movie the title of this post is from.

I should get no credit for not writing anything new for Truck Day this year.

But I should get extra credit for my sweet post on the history of Truck Day last year.

I am thinking I might go see if I can see the truck go by on 95 here in Providence somewhere.

Have At It, Winners

redsoxfandave has first choice. After he picks, Peter picks from what's left. Then Section 36, then Ryan. Note: Prizes B, C, and D have multiple available.

Prize C: a bunch of Red Sox baseball cards (will include some 80s cards, and other fun surprises)

Thanks to everyone who played and for all the responses to how/when you found my blog.

Contest A Success. For Four Of You.

I will put up the prizes soon, and dave will be on the clock with the first pick. 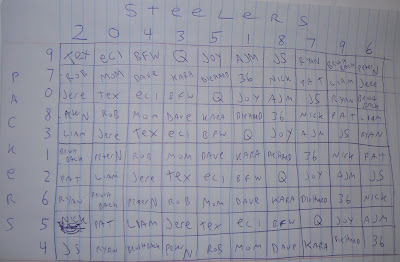 Click to make bigger. The entries are in: We have 19 contestants plus me. Everybody gets 5 squares. There will be 4 or more prizes which will be announced Monday. Winner of the final score gets to choose a prize first. Halftime winner chooses second. Third quarter winner picks third. Lowly first quarter champ gets the last choice.

I placed everyone in the grid in the order they entered the contest starting at top left. I put in all 20 names left to right. Then I repeated 4 times, each time starting one square to the right, so everybody will have 5 completely different sets of numbers. Then I drew numbers for the Steelers and Packers, in a video.

In case you don't know the rules: Let's say it's Packers 14, Steelers 10 after the first quarter. It's the last digit that counts (it doesn't matter which team is winning the game), so look on the grid for Packers 4, Steelers 0: Ryan. He wins the first quarter. Simple. You each have 5 sets of numbers. Each set is its own individual score. So there will be one winner for each quarter. If the game goes to overtime, the "final score" winner will be determined by the final score, not the score at the end of regulation.

Now, let's look at some of these numbers... 0-0 is always a strong contender, since the game starts at 0-0, and since the two most common scores in the game of football are 7 and 3. So even if a team leaves 0, it's one score away from getting right back to 0. Tex, the first to enter, fittingly got the golden double goose egg. I got 3-0 Packers, and Boston Fan in Wichita got 3-0 Steelers. JS got 7-0 Steelers, and my mom got 7-0 Packers. Patrick nailed 7-7. Those are your biggies. 6s, 4s, and 1s are also good. But with 2-point conversions, anything can happen. Good luck. And happy birthday, mom! Hope you get a b-day prize.

Also, Carvey is hosting SNL right now, and he and Myers did Wayne's World! And Carvey did a Church Chat! The Church Lady danced with Justin Bieber! And now he's doing Regis! '92 is back!