That was a 2014-y night. Sox don't hit, don't score. We may have to pull a Workplace Willy in this series. That's during a Sox-Yanks weekend series where one team dominates early but the other wins on Sunday at the very least, allowing that team's fans to wear the gear proudly on Monday. (Remember, I'm from Connecticut.)

OPS+ shows how a player is doing (on-base and slugging-wise) compared to the rest of the league. An OPS+ of 100 means you're exactly average. For example, Papi, despite a low batting average, will always get his dongs, and right now has an OPS+ of 132. Pedroia, who normally sits well above 100, is at 99 right now. Jackie Bradley, who has had his troubles with major league pitching, is way down the ladder at 66. Do you know what Stephen Drew's OPS+ is?

Negative 10! This guy's the anti-Bo Derek!

Still very confused about why we even thought about paying this guy all this money, especially when the one thing we needed was offense. (Damn you, Dempster!)

By the way, on June 1st, I noted here that it was a shame that the media signed Drew. A week later, Peter Gammons came right out and said he wondered if a media push helped to bring Drew back, and also agreed with me that it was an unnecessary/horrible move. Now maybe saying "see, Peter Gammons agrees with me" in 2014 actually makes me seem more crazy, but hey, the guy's a Hall of Famer (or something), and is in the actual media, so I'm gonna go ahead and say I gained some credibility with that comment I made. Unlike Gammons, though, I made my comment before Drew had played any games, while he waited until he'd had a few 0-fers.

Nice job by HH last night. Efficient as a mofo. Koji makes it close in the 9th but gets the save. Know what I can't have? Eck talking over plays. And Drew's 0-fer streak is now at...some number above 20, I can't keep track anymore.

On to The Bronx for the weekend. 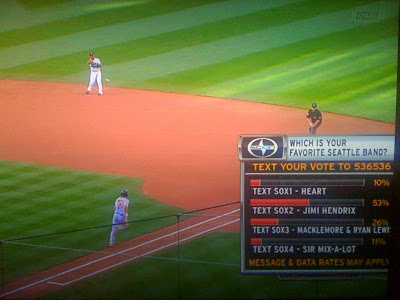 This screenshot from last night tells you all you need to know about...everything. You've got Cano lazily tossing to first. Drew making an easy out. NESN covering a vital part of a live play with some stupid other thing (while the announcers talk about it). And I'd add "none of the well-known grunge bands in the poll," but they said this was "Round 2," so I have to believe Round 1 featured the Basic Four: Nirvana, Pearl Jam, Soundgarden, and Alice in Chains, probably in that classic order, though the members of Mudhoney and Tad and the Sonics and The Fartz and Mother Love Bone and the Gits and the Fastbacks might have something to say about that. And terrible job putting those four all together in the first round. Though maybe they wanted to set it up for a Nirvana (or Pearl Jam) vs. Hendrix battle royale with cheese for the Final Round, which would also explain why Jimi wasn't in Round 1.

As for last night's X-Fest (excrement festival), we were down 3-2, and I set my just-as-cluttered-as-my-physical-space DVR to record starting about 20 minutes in the future, to avoid it cutting the game off early. Well when I pressed play this morning, it was already 7-2! Fucking fuck. So there wasn't much drama. I may as well have just not recorded the game and checked the score in the morning. Final: Mariners 8, Team with a catcher who just swings at the first pitch and drops his head in disappointment 2.

After TYR*ing for 5 runs in the 7th to tie the game (two Toronto errors and a double on what Gameday calls a "soft fly ball to shortstop), the Yanks lose it in the bottom of the 9th on an E of their own, as Solarte throws one away, causing the winning run to score and the Blue Jays to celebrate as if they haven't won anything since 1993. Speaking of Solarte, now that he blows goats, what are they gonna do with his plaque?

That's the fourth loss in a row for the Bronx Unabombers. Their June has consisted of nothing but even-numbered streaks:

As for us, we got three walks in the first inning but didn't score. Guess whether or not Peavy immediately gave up runs in the bottom half and got all mad at himself? More on this game in the morning....

Weird game. We get a run off El Rey in the first. There's a play where Napoli hits one down the left field line with Papi on first. The one and only thing the viewer cares about is where Papi is on the basepaths so we can see if he's got a shot at scoring. But NESN cuts to a shot of the air between first and second, then finally cuts to Napoli. The replay is of the ball rolling down the line and the fielder retrieving it. So we never saw Papi. On top of it being a key thing to see, it's also a great visual, Ortiz lumbering around. Oh well. He didn't score.

Lackey gives the run right back, and when we score again, he gives that run right back. Only this time, the inning continues. After a 13-pitch at bat to Ackley, he gets what could be an inning-ending double play ball, only he forgets to cover first. Or he can't because of some injury he's made up. Either way, he says "motherfucker," which is what all the other players should be saying about the pitcher who failed to cover first base. He goes on to give up a wild pitch, a walk, a single, and a triple, and you could turn your sets off there, folks. 7-2 Seattle, eventually going to 12-3. Ungood baseball player Stephen Drew fittingly ends the game by Beltranning strike three right over the plate, dropping his average to .143. He somehow has managed to get his batting average, on-base percentage, and slugging percentage all under .200. Not one hitter currently on the roster can say he's worse than Drew in any of those categories. If you include last postseason, he has 12 hits in his last 96 at bats.

Yanks lost to the Jays, so at least those a-holes fall 2.5 back instead of closing in on first place, which is not what a shitty team should be doing. My plan remains: the Jays are toast, the Yanks are a horrible team with about the same X W-L as ours, the Rays are too far gone, and I don't know what the hell the O's are doing. So I say we catch the Yanks first, then both we and the O's fly by Toronto, and the two of us go down to the wire before we pull away, capping off a fiery second half. But losing by 9 tonight doesn't represent my plan getting off to a good start.

Meanwhile, I told you about a family picture with old baseball stuff in the background. I'm still working on the research, will have a post up about it soon. 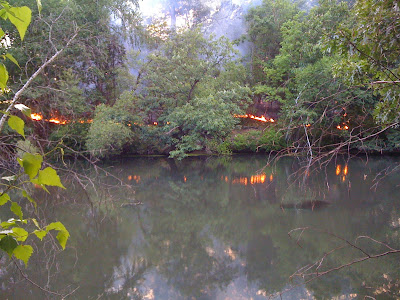 Came home from work, and our park was on fire! Looks like some a-hole or a-holes poured lighter fluid in a giant circle and lit it. It's shocking to live in a city and still see a "forest fire" down the street.

I remember Pat saying at some point around 1991, "if the Red Sox lose this game, I'm not gonna watch the team for a really long time."

That's what today's game probably had a lot of people saying as it went to extra innings. Kim went to the store with the game 6-1 Red Sox and Jon Lester pitching beautifully, four outs from a win. The moment she got home, she got to see the A's tie the game to send it to extras. And the store isn't very far from our house.

Lester was pulled after putting two guys on with two outs in the 8th. Badenhop gave up hit after hit until our 6-1 lead was 6-4. But Coco lined out to end the threat. Fine, so we bring in Koji with a 2-run lead, no problem. Except he gave up a 1-out dong, then a 2-out dong, and we were tied. I thought it was a little unfair of Eck and Don to talk about him blowing the save as if THAT was what put us where we were--Koji never should have been in that game in the first place, as we had a 5-run lead with 4 outs to go.

But Papi led off the 10th with a dong, and Koji came right back out and got the A's 1-2-3 to win it. Their final hitter was somehow their closer. An incredible win that could have been a world-crushing loss that could have been an easy win. It doesn't seem like it, but we've gone 4-3 in our last 7 games, gaining 2.5 games on first place in that stretch, as the Jays have gone 1-5!

"I was very fortunate and blessed that we were able to win a championship here, and because of that, I can show my face here as much as I'd like." --Johnny Damon

Aww, what a guy, continuing to get himself back into Red Sox fans' good graces by saying and doing all the right...OH WAIT, he said that today about the YANKEES as he played in their OLD TIMERS' game today. When Jeter's limo crashes, I hope it hits his.

Meanwhile, the Red Sox continue to run in this 2014 horse race with a masochistic jockey. The last two games I wasn't able to see the end of, and both times I found out we ended up coming close but still losing by, you guessed it, a run. Today we're ahead early and we've got Lester on the mound, so it'll be a win, finally.