I love it. He'll also miss the postseason, but I don't think they'll really miss him in that one-game wild card playoff.

"The deck has been stacked against me from day one," says A-Rod.

Who stacked the deck, ya stupid piece of fuckin' shit?! What an A-hole....

Here's to this story never, ever ending.

Please note that on the page linked above, there's also a link to buy your 2013 Boston Red Sox World Champions gear. 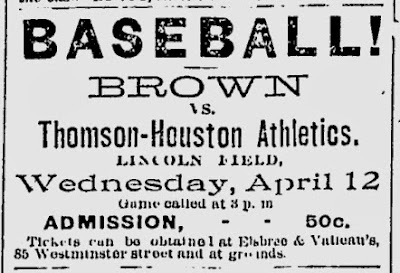 From the Providence News, 4/10/1893. Got me curious about Lincoln Field, and I see it's still a green space at Brown University and it even retains the name. I found one picture of a game being played there. I started trying to figure out exactly how the field was situated but I'm not having much luck. Will have to do more research. Or, do some yourself and get back to me. Especially if you're Ryan.

Opening Day (meaning our first game, in Baltimore on Monday, March 31st, not the home opener) will have a 3:05 start on ESPN2 nationally. I'm starting to think about going down to Balty for it. I'll have to see if Brian and Jen and/or Taylor* are around that day.

In other clock news, the Tigers start their home games at 8 minutes after the hour. I can't remember if I noticed that last year. I know I've talked about the Jays and their :07 starts, and of course the marketing scheme of having the White Sox start their games at...Circle K or something. I'm waiting for a team to start games at 7:01. What's in my wallet? A check for a million dollars for giving that company the idea just now. You're welcome.

*You should have figured out from context that these are some of my Baltimore-area-kinda friends and/or friends who live in the Philly-area but who are Orioles fans. Don't you know about context? It's huge.

PS: If you want to get in my Souper Bole contest and you can't or don't want to comment, just send me an e-mail.

PlayStation2: Dear MLBN's "Seasons" show, When showing clips of the 1974 A's, don't show us Tony Armas and think you can get away with it. Your pal, Me.

The news told me the aurora would be visible for much of the country tonight...

Tonight At The Supermarket

There was no line at register 8. I put my ingredients for "Mexican lasagna bake" on the belt, and got a stern "how are ya?" from the cashier. He had a ponytail. A tough-guy ponytail specifically. I gave him a similarly stoic return-greeting with eye contact, as if to say, "I'm sideburns guy and you're ponytail guy and I know what it's like to be thought of as a freak as I have also been mohawk guy and long-hair guy so I respect you, and I know what it's like to work at the grocery store so I would never look down on you either." While he was ringing my items through, the haggard old bagger with the big gray fu manchu very casually starts a conversation with his younger co-worker in a thick New England accent:

"Hey, I thought of you last night."

Ponytail guy keeps ringing and we both turn to the man in anticipation.

The next second felt like 69 seconds, as my mind raced through the possible explanations as to what in the hell was going on. I think my first thought was that this guy was just very, very comfortable with pornography and with his fellow employees to the point where he'd have no problem whatsoever with bringing the topic like you would any other. Besides, there's only one customer within earshot and he's a guy so...

But since my mind couldn't possibly fathom that he really meant what he said, I turned to a new option, the "wow, this guy is a real practical joker, and doesn't mind risking his job by saying outrageous things just to get a rise out of customers" option. Either that or he's decided he's had enough bagging, and is gonna go out with a bang. I half expected ponytail guy to whisper to me "management knows, we're just waiting for the police to take him away."

Me and ponytail guy made eye contact again, now with markedly different looks on our faces than those we wore ten seconds earlier.

Suddenly me and ponytail guy went from frightened to amused, grinning ear-to-ear smiles that neither of us could have expected at the beginning of the transaction. We have connected yet again, ponytail guy and I.

When I turned back to the pawn-lover and said, "you scared me for a second there," I realized that he had no idea why we were smiling or that he'd said anything that could be misconstrued as a fireable offense. "What," he asked, and I repeated myself, getting back another quizzical look. I glanced back at ponytail guy, who was now doing everything he could not to laugh out loud, got my receipt, and walked away as pawn guy continued on with his story like nothing out of the ordinary had happened. Now more customers were behind me, and ponytail guy probably had to wait a while to explain to the pawn star what had happened.

Now that Brent Musburger has nonchalanted his way through the final college game of the year (did he think it was the third quarter on those last few drives or what?) (and how do you, your color man, and your spotters all miss a blatant fumble?), it's time to turn our attention to half-heartedly following the NFL playoffs when we happen to be around when they're on and our wives aren't watching that show where three people you couldn't possibly care about make food and other people who shouldn't have so much power in life kick them out one by one if their meal isn't good enough or god forbid they left out an ingredient.

And this year I wanna actually fill that 100-square grid in our Super Bow1 contest. Notice I'm not saying the actual trademarked term as I fear the NFL mafia more than the real one. So here's your chance to get into the contest early and get a bonus square! Or maybe 2 or 3 depending on how many people end up entering. The point is, you'll get something extra. IF you enter NOW! Meaning before, say...Martin Luther King Day. Just leave a comment saying your favorite Padres (why not?) player of all-time, and you're in the contest. You don't have to pick a square with X and Y coordinates. I'll put everyone in randomly later. Just say a Padre.

Hey, a thought just hit me like a non-knuckleball. Kim and I watched that Knuckleball movie recently, and for some reason, Phil Niekro calls Mike Schmidt "Steve Schmidt," Come on, Phil! That'd be like if I called you Joe. Oh wait....

As long as this is turning into randomonium, a commentor/er on a recent post I did about Nirvana said something about the "When the Lights Out" box set, and I'd just like to point out that I did mention that when it came out in November 2004. Check it out here. Interestingly, I didn't capitalize one of the words in the title of that post. For some reason, on this blog, I've always capitalized every word in post titles, including "a" and "the" and "of." I did it early on and kept it as tradition. (Though I eventually broke the "never capitalize 'Yankees'" tradition.) But here I was breaking tradition just a few months in!

Okay, so get those entries in. You can win real prizes! I even actually sent the one from last year! Well, one of them. Ryan is still waiting for his second prize. It's coming, I swear.

This year's prizes won't include a fine nocturnal bird with big eyes. Because then I'd have to say "superb owl"!