Sitting Out The Big One

Between having no money and having an ever-shifting job schedule (meaning it's not too smart to try to plan things in advance), I have to sit out the big ticket sale. But now I'm working at 10:00 today anyway so I won't even get any VWR practice! I'm gonna do more of a day-day approach to going to games this year because of my new job. On top of the games I already have, which hopefully I can get to. So good luck in there today.

Side note: I had a dream last night that they honored the 1992 Red Sox at Fenway, but Yaz was there because they called it "1982" despite it clearly being the '92 team. There was a player I didn't know named "Defa" too. Then I ran the bases. Then it turned into a craft show. 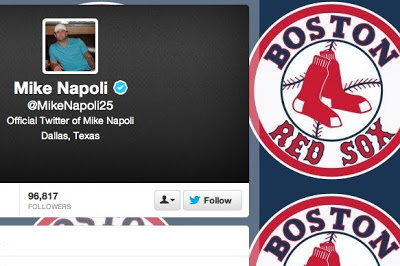 The main culprit is Google. But if the search results are based on what people are posting, it's the people's fault. But if the people don't know about the change, it's the team's marketing department's fault.

Top 10 misconceptions people have about why I get so pissed about this:

1. Who cares, the team has several logos, you can use whichever one you want. WRONG! The team has two logos. This one used to be the primary, it was altered, and it also became the secondary. I don't care if you use primary or secondary, but this is neither. It's defunct and no longer in use. (Except in the minds of everybody in the world except me and like three other people.)

3. People use defunct logos all the time, it's retro! WRONG! This isn't "I'll go into the past and find an old logo I like for kitsch purposes." This is "I think the Red Sox logo is x when it's really y. (Or, I Googled, and a thing I'm familiar with came up in 19 out of 20 gifs so why would I question it?)" Like I've said before, how can we ever use the old version in a retro way if we never realize it left? We're screwing up the future by not getting the present right!

4. Dude, I'm staring at both logos and I see no difference. WRONG! The "BOSTON" used to be blue and in a different font than the "RED SOX." That font was out of place, and they wanted to make it and the color consistent with that fancier font which I used to think was "Olde English" but I guess is something else. They also moved the stitches on the background ball. They held a press conference and everything. They changed the road uniform too, but I never see anyone taking the field with the old version and saying it makes no difference!

5. Nobody's reading at this point. Since I've talked about this topic so much, I thought this would be a quick post. But surprise surprise, I'm all worked up about it again.

6. At this point I'll just use the numbers as paragraph breaks.

8. Oh, I forgot that one point I always make. When the Marlins changed their logo, it was a national holiday. I bet Mike Napoli bought the new Marlins hat even though he was on the Rangers! Every American knows two things: Lady Gaga (or whoever the current Lady Gaga is) exists, and THE MARLINS HAVE A NEW LOGO. But the much more popular Red Sox change theirs, and nobody notices! I still can't figure this out, or how we're gonna change it. Or if the front office is even trying to fix the problem. 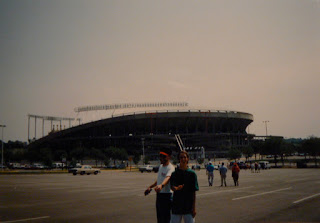 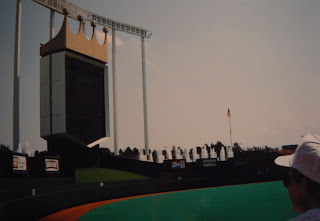 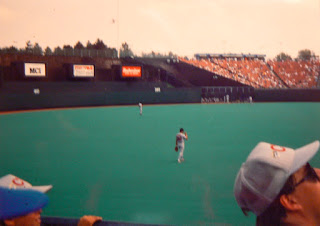 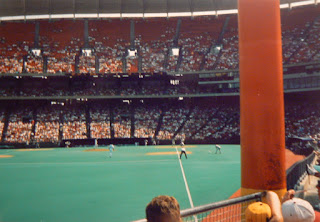 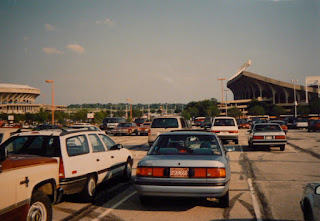 Watch This Stuff Before Em El Bee Takes It Down

I've been checking out some full MLB games on YouTube. This one, along with its classic "Jump" intro (after Harry Caray talks for a bit), has a crazy fight in it. It starts with Ron Cey's controversial homer at the 43:00 mark, and play don't resume for a half-hour! Also, if you like seeing Don Zimmer get tackled, and I know you do, watch the entire half-hour interruption.

If you search YouTube, you can also listen to some full radio broadcasts of really old games. (Like this one featuring Vin Scully from 1957.)


In the above video (not uploaded by me), check out the pennant behind Harry Caray. I've seen left-facing Red Sox socks before, but I don't think I'd ever seen those socks (the ones still used today) reversed. I wondered if it was some kind of bootleg pennant. I searched online and found this, for sale on ebay (for 50 bucks):

Weird, huh? The seller says it's from the "early 70s." And we know the video is from the mid-70s. I guess they were playing around with these socks before finally deciding on the right-facing version. I have the same pennant, got it when I was little, except the socks face the right way. I probably got that in 1979. Any info anybody has on the backwards socks is welcome as always.

Actually, I thought I'd seen a left-facing sock(s) before, but maybe I was just thinking of the White Sox...or the 1931 Red Sox single-sock hat. Maybe this is the only "backwards" Red Sox logo....I guess both the ebay one and the one in Caray's booth could have been bootlegs....

Time for the yearly Super Bowl contest. You know the drill, it's the thing with the squares. I'll make it easy for you. Just post a comment saying you're in, and I will eventually randomly insert your name into the grid and randomly choose the numbers. Check back on Super Sunday before the game to see what numbers you're rooting for. Deadline: 11 hours and 11 minutes before kickoff. You've got about two weeks. Tell your friends, too.

The cost to play is zero dollars and zero cents (U.S.). There will be prizes, which probably won't be that great. I mean, they'll be really great.

Ya Think Ya Know Somebody

Bill Maher talked about the demographic divide in society's reaction to the Te'o story. Only people under 30, he said, would find it believable to have a "girlfriend" who you've never met in person.

I hit 30 seven years ago, but I was still in my early 20s in the late 90s, when suddenly the world became a smaller place thanks to online chat rooms and the Internet in general. And I made friends with people I never saw. Any of whom could have been someone they weren't.

I got letters! Letters in the mail from people far away saying how cool it would be to meet in person one day. I never came close to taking it that far, but there were plenty of people who were way lonelier than I was who were willing to take online relationships to the next level, even without a face-to-face. Which is exactly what they probably wanted: a person to talk to who was in their same boat, who understood what it was like to not get any attention from the opposite sex in the real world, but who couldn't judge them on their looks. It's like a permanent "date with the blind"--you can let your house go, you can let yourself go, etc.

Some of the people I met online back then told me dramatic tales of loves found and lost, entirely online.

Even a few years ago, we in the Red Sox blogging community were all duped by a supposed fellow blogger named "Kaylee." She was a teenage girl who loved the Sox and was dying of some terrible disease. I've always been a huge skeptic when it comes to what I hear on the Internet, and I did have some doubts about Kaylee, but we pretty much all fell for it. There were other non-baseball bloggers who took their relationship with her further, sending her get-well packages in the mail and basically worrying their asses off for this vulnerable little girl. (Here's the point where I feel like the mom in Mrs. Doubtfire: wait a minute, why are we reminiscing about her like she's real?!)

Turns out Kaylee was a fraud. She wasn't dying. She may not have been a little girl at all. But if you'd asked me at the time if I knew any cancer patients, I would have brought up Kaylee as if she was someone I actually knew.

So I don't know if Te'o is lying or not. But I absolutely understand how a person could be fooled like this. And like he said in a recent interview--once you're in too deep, of course you're going to make it seem more "normal" to your friends and family by telling a few white lies about the times you spent together. After all, you wouldn't want people to think you're dating someone who isn't even real. Little do they know you're only hoping she's real yourself.

But I couldn't believe it when one of Maher's guests was actually yelling "he was lying," almost laughing at anyone who would think the guy was duped. She was a little older and obviously can't comprehend something that's probably pretty prevalent among people who grew up online. But that window is closing as the Web becomes more transparent--the teens of right now don't think of the Internet (if they even realize it exists beyond apps) as anything but a way to keep track of their real-life friends' every movement. Which is what we used to call stalking.


(I should also point out that meeting people far away has been going on since way before the Internet--I remember in high school just calling one 800 number after another, talking to people around the world just for the hell of it. And CB radios were huge in the 70s. But the Internet really opened it all up to everybody.)