"Don’t Think About Women When Season Has Started."

The Rub-man learned his change from Pedro. Can't be a bad thing.

Recently I told someone I work with my theory on how the holidays fall way too early in the winter. Because look at what we've got now: a few months of winter and the "spirit" is gone. Then I started looking at old posts of mine for a "This Day In...." post, and the first one I read was from 2005: a post about... The Jere-an Calendar!

It still holds true today, though I think Xmas moving to late January would suffice, doesn't need to be late Feb.

I've been checking his Twitter daily, and I think it's actually made me dumber. That thing reads like a support hotline for women with low self-esteem. It's just groupie after groupie saying hi to Mike, thinking they've chosen the exact right thing to say that will make him go, "would you like to share in my riches?" Sometimes I wonder if people are sticking to the character limit because it's the rule, or if they're just unable to form a complete thought. Or just don't know that many words.

I don't understand why there's such a debate about Schilling and the Hall. The guy has comparable stats to the other pitchers in there, AND he won three world championships, with awesome post-season performances. If this guy had played his whole career with the Yankees, there would be no question--first-ballot HoFer. He'd already be classified as one of the "great Yankees" and it would be assumed nobody would leave him off the ballot. I thought that's what he'd be a first-ballot guy anyway, but I only doubt it a little now based on what voters have been saying. But I still say he'll be in within his first few attempts. Some people act like he'll be a years-long Don Sutton debate-type guy. I don't get that.

I started looking at old posts I did on January 8th. I like this one, from 2006. In it, I describe going to visit Brian in CT (from NYC where I lived from May 2005 to April 2007), where we exchanged gifts. He gave me a shirt and I gave him a Billy Ripken "Fuck Face" baseball card.

It's funny, I still wear the shirt, so I thought I'd provide an update as to how it's held up over the last seven years. 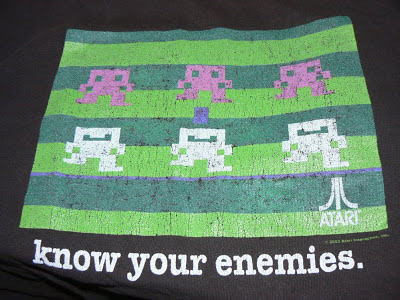 I left the flash on so you can really see its laugh lines.

As for Fuck Face, I actually referenced it in an e-mail to Brian about three hours ago, before finding this old post, and, in fact, this past November he gave me an update as to its status:

FUCK FACE is currently on display on the mantle in the kitchen.

I've seen Roger Maris's 61st dong a thousand times. But I recently came across--for the first time--a picture of the crowd fighting for the ball, taken from above. How did I miss this? I did a search for the shot after I'd seen it, and I still couldn't make that version come up. So maybe I'm not the only one who hadn't seen this. After studying the picture for a while, I realized that the ball wasn't at the bottom of the scrum, but that a guy was standing up, holding the ball in the air. I've highlighted the guy and the ball for you (along with two gloves I spotted in the crowd, just for fun). 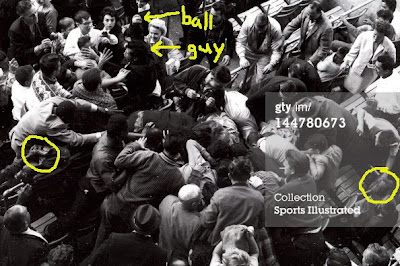 So I'll leave you with just the interesting photo (credit on photo itself), but I also had fun* watching the video from two different angles and trying to figure out how it all went down, and I also read about the controversy of how the fan (Sal Durante) initialed the ball, but the one in the Hall of Fame doesn't have the initials--supposedly Maris lost the original but I guess nobody knows the truth.

So instead of spending a week trying to put all that into a post only to end up with 20 browser windows open and no post to show for it, I'll just...do it this way I guess.


*not that much fun, as we are talking about a Yankee setting a record off a Red Sock

That's the difference in age between the oldest person on the Red Sox' 40-man roster and the youngest. Hard to believe there are major league players born in the 90s.

If it weren't for Koji Uehara, I'd be older than the entire Red Sox team!

Mike Francesa had that glint in his voice-eye all day today. While he admitted that he didn't think his Irish would win the game, he was convinced it would be close, and you got the feeling he believed they could win, almost acting like he knew something nobody else did. He seemed to be setting himself up for a win-win. If they win, he gets to gloat all year, if they don't--hey, he didn't expect it, but at least they didn't get blown out. In fact, he essentially said the only way the season wouldn't be a success is if they did get blown out. Well, they got blown out.

And all I kept thinking as 'bama rolled up the score from the opening gun (besides "I saw this coming a mile away" and "but it's still incredibly fun") was that it's a shame that my pal John Quinn doesn't get to share in the joy of Francesa's team getting destroyed, since he too is a Dame fan.

So, nice job, Team Playing Notre Dame. The other good thing about 'bama winning three out of four is how we got to see some highlights from back when Nebraska did the same in the 90s, despite Musburger's "asterisk" remark.

I also thought it was hilarious when the 'bama center shoved his QB. Because while most of the football kids are higher on the totem poll than the rest of the class anyway, I kind of think that within the jock hierarchy the center is thought of as the "fat kid," while the QB is the prima donna who everybody pays attention to. Dude gets all up in his center's face on national TV with a 42-14 lead, and the fat kid fires back without a second thought! Score one for the guys who don't get the sneaker contracts.

Side note: On the intro to the game, they talked about how the city of Miami is more than just South Beach, and while noting that all kinds of people live there, they actually said "straight or gay." A huge step forward for the USA, when we're hearing that in the opening minutes of the broadcast of the country's football national championship game. Nice job by 'PN there.

*I heard the hype all year about that Johnny "Bro" Man-ssiere, and literally the only time I flipped on the TV to see him, the announcers said how he loves the Yankees and wears #2 in honor of Jeter. Another youth led astray, what a shame.

We all know about man-crushes, man-scaping, and man-caves, which is our male-dominated society's way of saying, "I do x but I'm definitely not gay." But the other day I heard an extra-ridiculous one. It was an ad for a sports-themed barber shop, geared toward guys. They tell you to come in and "take a man-break."

This is how frightened people are of having anyone think they're less of a man, or, Thumper-forbid, a homosexual. "A break? What are ya, queer? I don't wanna see nobody takin' no breaks around me while I'm busy relaxing on the couch with a beer."

Apparently sitting in a chair for a few minutes makes people who spend most of their lives sitting in chairs gay.

Moore Of My Usual. (Bad Puns And Commie Pinko Shit.)

I support peace, and I beg any young person reading this who's thinking of joining the armed forces to please reconsider. Our war department has done little to show you they won't recklessly put your young life in harm's way for a cause that has nothing to do with what you signed up for. They will not help you once they've used you and spit you back into society. If you're a woman, they will not protect you from rapists in their ranks. And because you have a conscience and you know right from wrong, you do not want yourself being used to kill civilians in other countries who never did anything to hurt us. We are currently involved in at least a half-dozen military actions around the world. Don't become the next statistic so that General Electric can post another record profit -- while paying no taxes -- taxes that otherwise would be paying for the artificial leg that they've kept you waiting for months to receive.

I was going to leave it at that, but I have to mention my old Ridgefield pal Nate, the first Coast Guardsman killed in action since the Vietnam War. I lost touch with him when he moved away, and years later, I found out he got killed. I didn't even know he'd joined the Coast Guard.

The more I read about the guy's post-Ridgefield days, the more I learn about why he was even in the Gulf at all. He was a volunteer fireman when I knew him, and apparently he wanted to pursue that, or become a cop, and Sky knows we need more good cops. But the reason he joined the Coast Guard is that he was running out of money and options in life. This was before 9-11. So once all the shit started to go down, there were the military fatcats in their offices, sending out my friend to Iraq, not once, but twice. Quotes from his sister (who was present the night we all went to Nate's house to scratch off hundreds of lottery tickets looking for a major score that never came) say Nate was not happy over in the Gulf, and just wanted to come home. This was a guy who just wanted to serve his fellow human. And to do that he went through the military, who promised him a better life but promptly used him as a human shield.

So, basically, what Michael Moore said. If you're thinking about joining the military because you feel you have no other option, and you happen to have hit the wrong keys and ended up on some random Red Sox blog when you're supposed to be poring over your idiotic friends' pictures of their breakfasts for five hours, please, please, please, think some more about it, and do anything else. Thanks.