I never did finish checking up on my pre-2011 predictions. It had nothing to do with how the season ended--that's proven by the fact that I forgot to do August as well as September, and after August we were in first place. So here we go:

August: I went with 17-11. The actual was 17-12. Got four series exactly right. At that point I was still running 4.5 games better than the actual record, thanks to the shitty start to April. Then I wrote: "we shall see what September brings...." Of course, it brought a bunch of shit.

September: I went with 14-12. I gave them a mediocre September just to make the final record a little more believable. 14-12 was supposed to be fine, since it would still give us 102 wins. Instead they went 7-20. I started with a win against the Yanks. Wrong. Said we'd win 2 of 3 from Texas, we actually lost 2 of 3. I said we'd lose 3 of 4 in Toronto, which we did. Instead of winning 2 of 3 in Tampa, we were swept. We split two with Toronto, as I said. Then we lost 3 of 4 against Tampa--I had us splitting. Sweep the O's in the final home series? Ha. We lose 3 of 4. I actually nailed the last two series, as we lost 2 of 3 in both NY and Balty. I thought they'd be meaningless games. I was wrong. Needless to say my playoff predictions were all irrelevant.

One note of awesomeness: My predicted record from May through August was 71-38. The actual record was 72-37. So I nailed the middle chunk of the season, and like the Red Sox themselves, I was off in April and September.

My mom's friend has a nephew named Mike Olt who played in the Arizona Fall League this year. I thought that was cool enough, but when I looked the guy up, I saw that he was actually leading the league in homers. He ended up extending that lead by hitting a total of 13, nearly doubling the second-place guy's total. He also finished the season on top in ribbies, total bases, and slugging, and was top ten in OPS, BA, and OBP. Terribly, he was snubbed when it came to league MVP, though he did win multiple player of the week awards.

He's a Texas Rangers prospect, third baseman. Watch for him.

And Rangers, if you're thinking about trading prospects for starting pitching, the Red Sox have this amazing pitcher named John Lackey.... 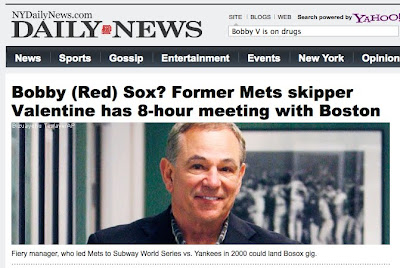 So weird. You know my thoughts on ol' Bobby. In fact I've cleverly hidden them in this screenshot.

Here's your 2012 spring training schedule. If you've been watching the April page you already knew the final game will be in DC against the Nats.

Almost every time I go to a game at Fenway Park, I watch for the moment when David Ortiz does his pre-game running/stretching. Because he'll almost always be out behind second base just as one of his buddies from the other team is out there. It's always a great photo op when David is laughing and hugging and clowning with his opponent pals.

When I read that Seattle Mariners' outfielder Greg Halman was stabbed to death this morning, I checked to see if any of his 44 major league games were in Boston. One was: July 22nd, 2011. As it turns out, I was there. I went through my photos from that day, and guess who Papi's special behind-second-base friend was that day? 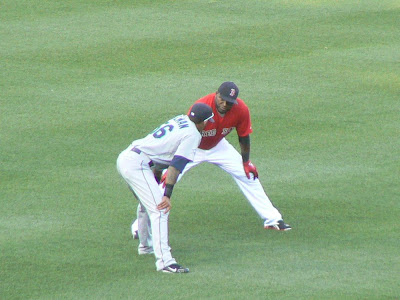 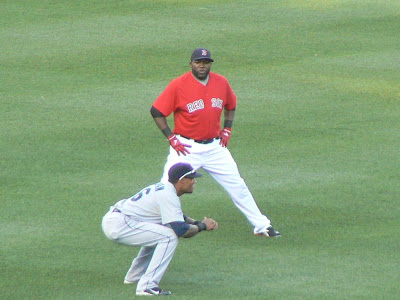 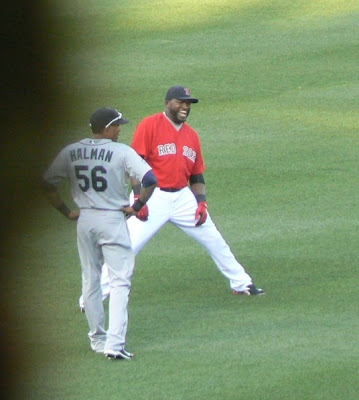 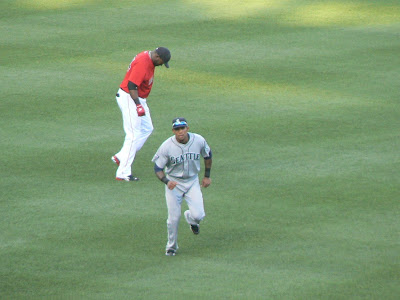