Do Not Assault Umpires

Kim and I stopped by the PawSox Hot Stove thing at McCoy today. 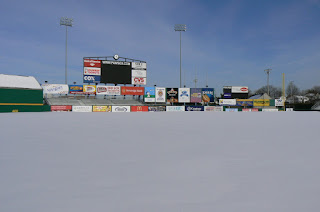 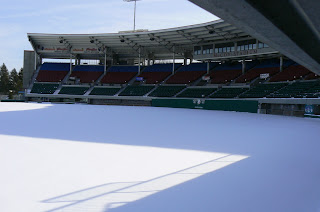 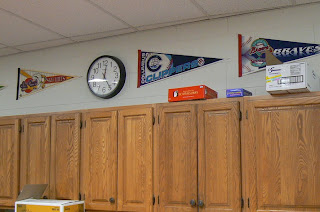 Scattergories is provided for the visiting team. 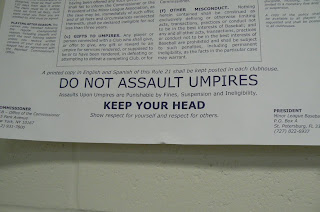 As is this warning. 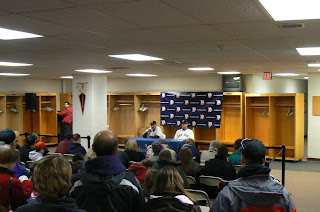 Arnie Beyeler talking to the crowd. 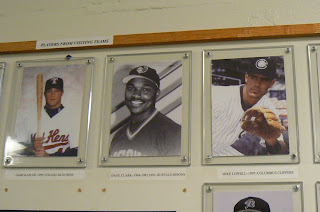 A young Gabe Kapler and a young Mike Lowell.

Then we finally went to Modern Diner. We'd tried to go several times before but it was always too crowded. Thumbs up to the M & M pancakes!

Guess we might be seeing our old pal and our former pal pretty often in 2011.

We'll get to hear Remy and Don wonder about the injuries Manny will fake to avoid the three Fenway series', while in reality Damon's the one who'll still be trying to hide.

Know What I Jus' Noticed?

On craigslist, when you look at tickets for sale, it now differentiates between "tickets by owner" and "tickets by dealer." So now you can avoid wasting time on stupid scalper sites pretending to be human beings with a pair of extra tix. (In case you couldn't tell by their idiotic, wacky-character filled ~~subJ3ct L1nez***. Well, actually, regular people do that too, but now you can tell the difference without having to click.)

New York Baseball Giants Fans, This One's For You

Did you know the Giants will be bringing their World Series trophy to New York this weekend? Among the stops will be Finnerty's Tavern, which is right next to NYC's #1 Red Sox bar, Professor Thom's. Finnerty's has become a gathering spot for Giants fans, but only recently. Mighty Quinn has mentioned the place on his blog many times, noting that it's run by a Yankee fan. I guess that must be the co-owner along with the guy mentioned in this article. Maybe Quinn can fill us in on specifics....

Railroad tracks pic I took a few months ago:

What I got in the mail Tuesday:

The hockey announcer saying "rim job" on the air, uploaded by me, in case you missed it:

ROOMMATES FOR LOVE AND PEACE 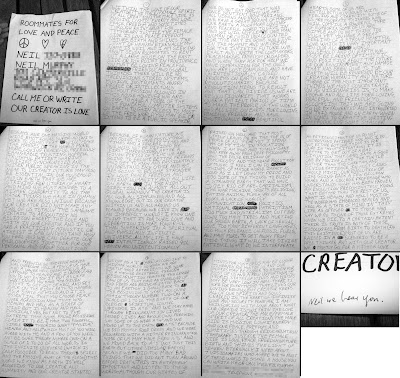 Last summer my friend Amber found an amazing flier on the east side of Providence. We have decided this will be the next big Internet thing, so you better go posting it all over the place.

It was created by a man/boy with a somewhat skewed utopian vision named "Neil." He is looking for roommates. Click the pic to read the entire 10-page dissertation (yes, it was all tacked to a pole!) if you like, but I will give you the highlights here. I will spare you the ALL CAPS.

After briefly describing the male and female sides of "our creator," Neil says he's seeking seven loving, peaceful roommates to rent a large house with.

There will be no televisions, stereo systems, musical instruments, angry people or intellectuals without passion allowed in this house however we are going to have a model of the most powerful computer system on earth to gain access to most of the free world.

Pages 2 and 3 (they're all numbered for your convenience) go into the usual hippie shit. He invents words such as "heartful" and "resolutionaries." He seems bent on "public speaking" both inside the house and out. And as for that "creator"...

We pertain to absolutely no religion except the love and faith in our creator and if you are a practicing agnostic or atheist I can understand how you feel and we can debate our philosophies together for our personal and group solutions.

He then outlines your future life with Neil and company:

Yeah, but who's gonna take out the trash??

Now Neil's getting all philosophical-like on us:

Backed by that math, Neil feels he can help the world (when he's "good and totally sane," mind you). Things he claims we need to get rid of include "99% of all books." He says we need to get away from "a lack of sexual love" and "too many languages." I just wanna know what the rent's gonna be....

Are heaven and hell important to you when finding a roomie? If so, Neil's your man, because he's got it all figured out:

I have two powerful, simple theories what "physical" heaven and hell is which most of you will agree with me and a few of you will not be sure. Theory number one--on a scale of 1 to 10 of all worlds in the infinite universe (which is only possible to reach through spirit and the passing away of the flesh) this world we know as earth is "hell" according to our creator and humanity and our creator started us off as a "1" (hell) according to his/her worlds so when we are mostly good after death we soar to a higher existence through reincarnation[...]

Honestly, I can't tell where one thought ends and the next begins. Continue reading it yourself for all the details regarding the rest of the numbers 1 through 10, and the advertised "theory number two." Winning candidates, he notes, should agree with "most of these words." Good luck with that, Neil!

(At the bottom of the title page, someone has scrawled "Neil we hear you." We're still wondering if that's a taker...or someone who wants Neil's capital letters to stop shouting!)

The first full baseball season of my life was 1976. Glenn Hoffman started playing professional baseball that year for the Elmira Pioneers.

The most recent baseball season was the last for Glenn's brother, Trevor. Pretty crazy that that one generation has been playing ball my whole life.

My friend Al Pist's new-ish band with Rich Stremme and some other people you don't know is called M-13. Kim and I saw them at the El N Gee in New London Saturday night. They blew us away. 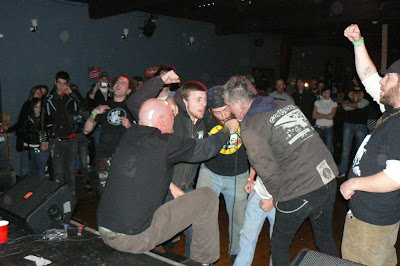 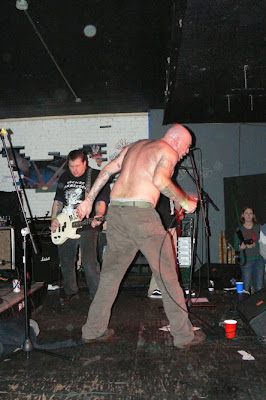 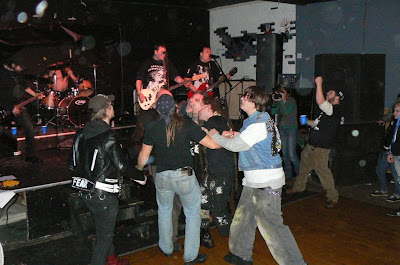 I was gonna post pics of the other bands but they came out kinda crappy. It was cool to see Refuse Resist do "Still in Massachusetts" live, though.

Some other randomness--a yacht club close to where we live (not that close!) burned down during that last snowstorm. The place had survived a few hurricanes. Now, it's...this: 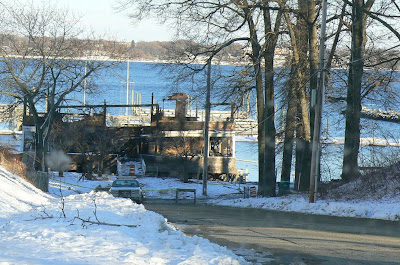 And as you may or may not know, one of my holy grails as a photographer is capturing anything flying directly in front of the moon. I didn't quite get it, but this shot from today is still pretty cool: 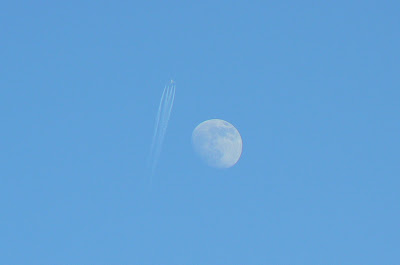 Dear Sir or Madam, here are the top dong-kings by letter.

Format: "All-time leader for his letter (bold if active) / Highest ACTIVE player for that letter / Second-highest active player for that letter". (If the top guy is active, the next two are #2 and #3 actives.) This is through 2010. So I kept guys in there who have retired this offseason. (Mainly to keep Mike Lowell on the list.) Lots of other Sox on this list. I was gonna talk about some of the races in there, but I'll just put the list out there and you can do whatever you want with it. Tomorrow, pictures from the M-13 show we went to in New London tonight.