Kwiz season never really got rolling this year. I declare it officially dead. But here's a question for you:

Guess which animal I almost hit with my car today? I'll be back later to post your answers, but I bet nobody gets it. Take as many shots at it as you want.

So I get off the highway, turn left at the light, and from my right, out of the gas station parking lot, flies something green. I couldn't believe my eyes--it was a parrot! It flew low right out into the street, and skidded on its chest in front of my car. I swerved, but a car was coming the other way, so I could only swerve so much and hope the thing didn't go under my tire. I didn't hear anything, and I looked in my mirror to see it get up and struggle back toward the sidewalk, as a huge tow truck also narrowly avoided it. Then I could see it attempt to fly again along the sidewalk. I thought about going back and trying to grab it, but I didn't want to dance around in traffic doing so, and I had to figure whoever let it go was probably nearby already trying to catch it. At least I hope so.

By the way, this wasn't a parakeet, it was a solid green, big-ass parrot.

I think my personal Twilight Zone episode is the "walk-off" misuse. The Red Sox scored three in the bottom of the ninth to win today, forcing the opponents to have to walk off the field mid-inning, but it's universally reported as the winning team having "walked off with the win." You can't walk off the field unless you're on the field, which only the defense is at the time of a walk-off hit.

(Funny, my pal John Quinn is a huge Twilight Zone fan, and his personal TZ seems to be just hearing the term "walk-off" so much.)

Anyway, Lester shined/shone/shinded today and the offense bit until the ninth in the 3-2 win.

David Ortiz had a bad start last year. He finished up pretty good, though. I looked at his numbers from June 11th on, and they translate to a season of 42 dongs, 126 RBI, and .264/.356/.549. That's an OBP one point higher than Jacoby Ellsbury's 2009 season. And a slugging pct. one point higher than Youk's. I'm not trying to make excuses for his season which was clearly crappy as a whole, but if you look at what he's done in the last few months of games (combined with what he's done his whole career), why would you think he's "finished," as Yankee-lover and guy-who-thinks- he's-dealing-with-Yankee-fans and guy-who-thinks-he knows-shit-about the-Red-Sox- or-their-fans Pete Abe does? (Along with many others who just assume this is David's final year and he's done and this is a farewell tour and he'll be on the bench after April.) They all could be right, we don't know. But anybody could fall off the face of the earth--why assume Ortiz will be that guy? This isn't Paul Zuvella here...

I flipped on Tony Mazz and that effed up guy on The Sports Hub after work, and felt like I was in bizarro world. Mazz was telling me that nothing about the 2007 Red Sox season was exciting compared to the previous 90 years of Red Sox baseball, and that when we swept the World Series, everyone said, "That was unfulfilling."

They went on to talk about how there isn't one big star like Pedro, Yaz, or "Manny and Ortiz" (as if Ortiz isn't still on the fucking team). What they're doing by saying this is lamenting the fact that the Red Sox have multiple superstars on the team. Kevin Youkilis, Dustin Pedroia, Jon Papelbon, Josh Beckett--these guys would be gods on the Kansas City Royals. Instead, they're just great players on the Red Sox--nothing to complain about!

I never know if these guys just say shit to get people to call in, or if they're just stupid, but either way it stinks. I turned it off but flipped by again as they were telling me that "half the (Red Sox) fans hate Papelbon." I can't even imagine where this would come from, other than maybe that they judge it on the 99% of talk show callers whose memories don't go further back than the previous game....

Youk, Belt, Herm, and Jac with two hits apiece. Wake threw five fine innings and one shitty one. And the line on Dice-K in his first outing of the spring: 2 IP, 2 H, 1 ER. Sox win 6-4.

Sitting Still's been posting picture galleries from spring training. Scroll down to "Galleries" on this page.

Robert Culp is dead. I have to hear about I Spy and Everybody Loves Raymond, but I'll forever think of Culp as Bill! From Greatest American Hero! (This is how big a fan I was at the time.) He had that coveted final spot in the opening credits, the one where you get your name AND your character's name. What's the rule on that? It seems to go to a famous actor who isn't the main star on a given show. Like Don Knotts on Three's Company. Yet Nancy McKeon got it on Facts of Life ("and Nancy McKeon as Jo"), when she was just a rookie like all the other actors. Who knows... RIP Bill Maxwell.

Mike, Bill, and Vic with dongs, and Beckett did great. We lead the Bucs, a lot to a little, in the 8th. (Update: Pirates 9th-inning rally falls short, we win 6-4.)

More Of The Toilet Getting Its Ass Kicked

Some really good pics of the Yankee Stadium demo went up yesterday! I drove by on the highway on Sunday--I could see that the whole left side of the upper deck was already gone, with the right side still sticking up. Bizarre stuff. 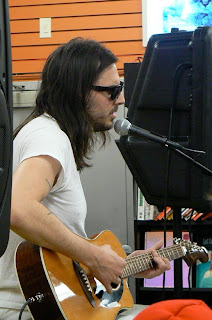 About a decade ago, a lot of tame "rock" bands were emerging, and we were told they were "saving" rock. This pissed me off because A. it clearly wasn't anything new and was shitty anyway and B. I was in a punk band at the time and thought that if people thought rock was "dead," their problem was they hadn't heard us! So there we were, stuck with a new breed of "rock" bands who I felt deserved air- or real quotes around their style of music. But then I saw Andrew WK! And he blew those bands out of the water. Look, I know, what bands I'm "supposed" to like to be "cool," but I don't care--WK came out of nowhere with a care-free guitar assault and I was immediately on board. He was combining the spirit of punk rock with the party-it-up attitude of hair metal, without the bullshit solos or costumes. 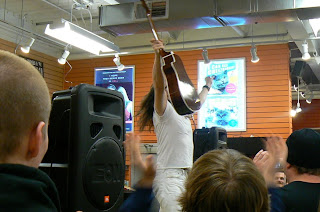 Andrew's new double-album came out today, and for some reason, he decided to spend it playing an acoustic performance at Newbury Comics in Norwood, Mass, followed by a signing. Knowing a real WK concert would cost $$$, I had to go to this thing tonight, even though I knew I'd barely make it to the 6 PM performance after work. 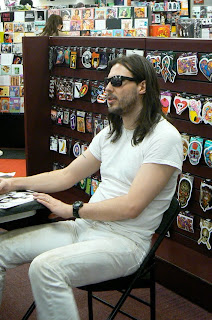 I got there 15 minutes late (like most things on this planet, this is the fault of the genius who invented the Massachusetts road system) (but also the driving rain). But I got to see a few tunes before he went on to the signing portion of the evening. After waiting about two hours due to a costly mistake on my part in misjudging the positioning of the line, I finally got to meet WK. I thought about asking him to sign my cd in blood, but instead I got a normal signature, a pic, and...a bonus thing where I filmed him doing something which is a surprise. The guy was very friendly, giving each fan as much time as they wanted. He's one of these "goes out of his way to show appreciation" types. aka the good kind of celebrity. 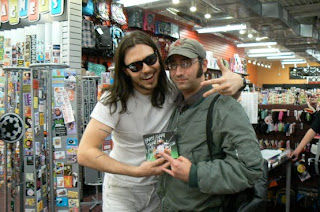 It was odd seeing one of my favorite songs of all-time, "I Get Wet," done acoustically--he kind of hammed it up throughout the songs in acknowledgment of the surreal setting and arrangement. Though the cover he did was this really serious song which he played totally straight. Sorry, I don't know what song it was. End. Pics attached. 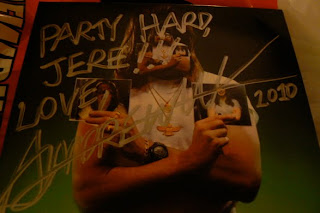 Actually, can I just say something? I hate that I'm wearing a collared, button-down shirt in that pic. Or ever. That's what happens when you do something right after work.

Pedroia hurt is wrist in our 7-2 loss today. PD James should be just fine. HH stank. Weird seeing the Twins feed on NESN--it's on right now on tape delay. The Mayor's Cup score is something to something.

Something I forgot to mention. A week or two ago, I had the shitty sports station on, and that narrator voice that comes on at the start of the hour said that the Bruins played the Devils at "exit 16W." The Devils stopped playing at the Meadowlands in 2007. Terrible.

Later tonight I'll post pics of what I did tonight. It ruled. In my opinion.

Imagine if we had GPSs back in our high school and college days? Life would have been so....boring and adventure-free.

My latest motto is "I love technology but it's ruining everything."

Just a quick one here, clip 3 of the me/Chan 1999 trip. We cross the bridge into Detroit and get off at the Tiger Stadium exit. I left out the Skydome stuff since it's nothing you can't see on Street Views. I also left out the part where we drive past a Canadian flag while Rush is playing on the radio. I think eventually there's some good stuff. Stay at least 3/4-heartedly tuned.

I love the fight we have at the very end of the clip. I'm telling Chan to film a certain thing and....

We shelled the shit out of Brad Penny today in one game. In the other, Boof and Taz got shelled themselves.

Chan's pics from yesterday, another beautiful day in Manhattan.

The first bunch are from the High Line. I've been waiting to go to this thing since I first heard about the idea. It's an elevated park up on old train tracks on the lower west side. I love how people sit in that theater-like area to watch 10th Avenue as if it were a movie. And they've done some cool things with the benches and the way the concrete is laid out. In shot 17, zoom in and look right in the middle of the pic. And check out the shot I took with the Empire State Building squared up to that castle-like building. (And read "Moran's" as "Moron's," of course.)

The last few are from Madison Square Park. There's an art installation with these statues all around, some at ground level, some atop buildings. We were trying to spot as many as we could. I feel like if you didn't know about it, you probably wouldn't notice them anyway.

I heard a little of the 'cists on EEI this morning. They asked the question, "Do you think liberals really care about these people, these 32 million uninsured? Isn't it just an act?"

Hey assholes, if we didn't really care about people, we'd be Republicans!