Tegan & Sara have a new album coming out. I really like the first single, "Hell." And I'm wondering...is this when T & S go mainstream? Like, really mainstream?

Something Days Till Opening Day

Nice little Red Sox Opening Day lineup gidget at Projo. (It's obviously from last year but it's still current since it goes through '09 op. da.) (But still no excuse for using the old logo which was announced last off-season and newspapers should totally know but then again they don't know how to spell Kottaras.)

The Thing Is Back!

They're doing that thing, like last year, where you go to some mall and get a voucher to buy two tickets in a pre-sale before the January 30th big boy. Check out the schedule here, and start doing your creative planning to get to as many as possible.

Look here at the before and after pics of the Presidential Palace in Port-au-Prince. At first I thought, Oh, it's really just the top dome-type things that collapsed. Then I looked closely and realized there had been an entire second floor that collapsed into the first. But forget about the palaces, imagine what it's like in all those little shacks all clustered together...

Maybe Jason Bay could help those poor people out with that extra 4 million bucks or whatever it was he got.

Conan Does The Right Thing 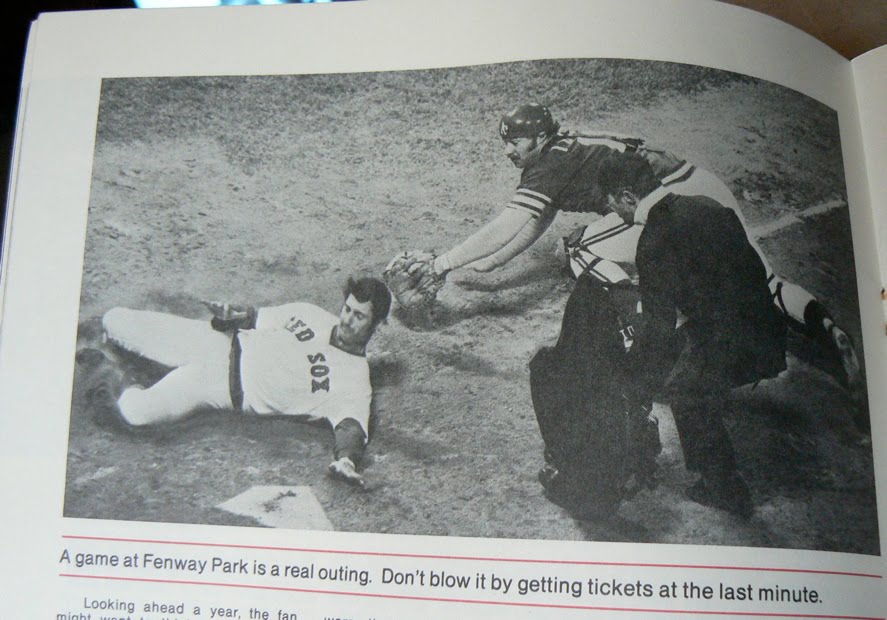 It's time to give the answer to this kwiz. And it's perfect that no one got it because I messed something up. Here's the picture again. And here's how I arrived at the answer:

Okay, it's clearly Carl Yastrzemski. Scoring against the A's at home. The picture is from the April '76 SportsGuide so it's from 1975 at the latest. No bicentennial patch for Yaz--but those weren't worn in the postseason, so, since he's in the jammies, it's gotta be from '72-'74 or the '75 postseason. Many of the other photos from the magazine were from '75, which made me assume it was the 1975 ALCS. And I was sure it was from the first inning of game one, with Yaz sliding past Gene Tenace. And that's where retrosheet has it wrong--they say Yaz singled and scored on an error on the play. He didn't score on that play, he scored on the next play, Fisk's liner past Bando that Claudell Washington also botched. And I was about to post that as the answer, until I realized some things were wrong. Old news articles show the A's wearing yellow in that game, not green. This photo also is from a night game (see the shadows and Fenway's seven light towers reflecting in Tenace's helmet), and Game 1 of the '75 ALCS was a day game. I also found another picture of Tenace from the game, and he had a blank helmet, no A's logo as in this pic.

That makes this game from either '73 or '74, since Tenace had been wearing number 38 in '72 before switching to a number starting with 1 (18), which he has on in the picture. And Yaz only scored one time at Fenway on a non-home run in that time when Tenace was catching. June 11th, 1974. Carbo hit a bloop single to right with two outs. Yaz was running from first. When Reggie bobbled the ball in the outfield, the Gerbil sent Yaz home. Articles from that game say that Tenace actually accused the Red Sox of running up the score--only to have the A's close the lead to one. The Sox won 10-9.

So nobody had it right, including me, until just now. No credit given...

More interesting (to .0000000000001 percent of the population) info I discovered. Like I said, the bicentennial patch wasn't worn in the postseason (only during regular season, at home, in '75 and '76). But I found a pic from a Red Sox workout during the week off between the end of the '75 regular season and the ALCS--and Fred Lynn was taking BP in his home jersey WITH patch. So I'd guess they were given brand-new patchless jerseys (or, less likely, had the patches taken off) right before game one of the ALCS.

You know how the fences at Fenway all the way around the park are covered with ads? And you know how I totally hate that? (I mean, yeah, I understand they need to do this and if it was just a few, whatever, but when it gets to the point where every inch of space is covered it just looks ridiculous.) I have an idea to stop it. Major corporations, listen up:

You are billionaires. I am asking you to pull your billboard from Fenway Park. But Jere, won't another company just fill that space? Funny you should ask, Corporate Voice. The answer is no--IF you pay for the space you already have, but make your ad's design be: a solid green rectangle. We can make the Fenway walls green again if we just buy sections of it and make them green!

At first I was thinking, what if we all got a bunch of money together and paid for a billboard on the right field fence that said "Stop the Ads" or "Ads are stupid" or something, but I figure the team could just refuse our money--it's their choice what they put up there. But if freakin' Nikon or whoever said "We just want a green rectangle," and held out the cash, maybe the team would agree--they get their money, and Fenway looks a little more like Fenway.

So, corporations and other billionaires, start readying your pitch. In fact, maybe I should be asking just regular billionaires. They'd just be helping the cause, without losing any advertising they used to have. But corporations, come on, we know you exist. You think we wouldn't have heard of Comcast if there wasn't a big sign reminding us of its existence?

Still, we believe. That no one has answered the latest kwiz correctly yet. Give it a shot here.

We weren't a Gumby family at first. But we were always an SNL family. So the first Gumby I knew was Eddie's Murphy's version. A few years later, around fifth grade, I discovered the real Gumby show and I was hooked. The best was when he went to the moon. I still imagine the background music during those parts is what you'd actually hear on the moon.

It also seemed odd that such a happy-go-lucky guy like Gumby, would have "enemies" in his magical land. But G and Backwards J were always there, messing with the citizens of the otherwise utopian world. Or was it J and Backwards G?

I even got a Gumby T-shirt in Puerto Rico in a 3 for $10 deal. It had Gumby with a surfboard on the front. And on the back, the same shot seen from behind. And one of my good friends has a long Italian name starting with "Gamb," so he's always been "Gumby," meaning Clokey's favorite son has been, in a way, part of my life for decades.