Herrera knocks in Gomes in the bottom of the ninth in this battle of the two teams that will duke it out for the AL East title this year, once the Jays and Yanks are out of it. Lester gave up 0 earned runs. Big win for us. Lackey goes tonight in game 2.

But Sox arms give up sixteen. And we're swept by the Chicago Cubs. Jesus, I see now in the box the Cubs only had one zero, in Rizzo's RBI column. Other than that, all nine guys had at least a run, a hit, and a ribbie.

As long as we got shelled anyway, it was good to see Mike Olt hit his first Fenway dong. I told you in 2011 about how my mom's neighbor is his aunt--he's a born/raised Connecticut guy. I heard the homer in the car, but I didn't hear the stuffed-up Castig say anything about his and my fellow Connexecutioner. And my mom tells me Remy was losing his tooth around that time.

Mookie also donged, the first of his career.

And it's been fun watching the Yanks lose and lose and lose some more--they've lost 5 in a row and 9 of 11, and are under .500 this late in the season for just the second time since 1995. And we're the defending champs. So how could I not say life is good, all droughts considered?

I had Suzyn and John on today between shifts, and Suzyn was talking about that play where Papi started walking to first early on ball four. Here's how she put it: "[the Cubs] put the (intentional walk) signal on and he walked to first base--he didn't even stand there." John says "odd," and then Suzyn adds, "I guess he came back, I just saw that part, he was walking down and everyone was laughing." I mean Jesus Fuck, you can't just say a bunch of shit on the air when you have no idea what the fuck you're talking about. By no means did Papi see that they were intentionally walking him and immediately walk to first thinking the ump would just allow them to skip four pitches or let them occur while he watched from first base. It wasn't even an intentional walk anyway. The fact that some people thought that was "controversial" was bad enough without having other people tell the story from the last chair in a game of fucking telephone. If you wanna hear it, it's at the 4:00:30 mark on Gameday Audio.

Speaking of announcers I'm not fond of, did you hear Dave O'Brien's call of Napoli's dong off Tanaka the other night? That was a jump-around-the-room moment, as the homer broke the tie with two outs and two strikes in the ninth, yet O'Brien called it like it was a meaningless home run!

And did you hear Remy try to say Ernie Banks's famous line a couple nights ago? Let's just say he didn't get it right. Even George Costanza got it right when he was hired by the Yankees!

In "NESN cameramen showing ladyparts" news, last night we had them showing a female fan in a skirt, who promptly crossed her legs verrrry slowly as Don read a PawSox promo, leading to silence from him and Remy. There was minor snickering when they talked again, but they were smart enough to not say anything to get them fired. Then tonight, we had two girls start to hug, only to have one pull away, leading the other to mysteriously put the ball she was holding down her shirt, exposing a whole lotta skin. Camera lingered before they cut away, then Remy gave it an "ohhh" before they both started stifling giggles. Eventually one did the Muttley laugh. I may post video. (Of the second incident only!) 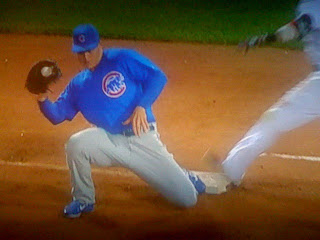 Again, I don't know whether to blame NESN for not just going right to the spot above and pausing it like I was able to do at home, leaving Remy and Don to speculate based on nothing and say "oh it looks like a tie," and leaving me to wonder if "New York" is hearing this and going, "yeah, I can't tell either, let's not even pause it or wait to see if THEY pause it, let's just LET THE GAME END on this play," or whether to blame the secret umpire room for not just using all the angles, pausing them, and then telling the helpless field umps exactly what happened.

A second after Don said, "this could take a while," New York took a steamin' ump on the game, ending it right there. What stinks is that had the guy said safe initially, they'd probably keep it that way. What stinks more is that he was safe and I have visual proof right here, and I'm just some guy.

Of course, in April, Farrell said he was told the ball just has to be inside the rim of the glove, while ESPN's announcers told us it has to hit the back of the glove and be actually caught for it to be a "catch." So who the fuck knows anyway. But I think everyone involved would be more comfortable with the replay people at least taking their time on a play that decides a game.

Momentum Ends With Something Something

The G news: Yanks lose at home in 12, their 7th loss in 9 games; we're still playing the Cubs so I assume their next two starters will stink and we'll easily win both games; and Kim and I just won an amount of money on a scratch-off that's big enough to dance around the room over, but small enough where the mafia won't even notice! So it's been a good night overall!

On June 18th, we finished a sweep of the Twins, and headed out on a 10-game road trip 6.5 games out of first place.

That road trip is over, and despite the fact we lost 6 of the first 8 games on it, we now sit 6 games out of first.

Tonight's game got a little iffy in the middle, but we win it 8-5 and take 2 of 3 from the Yanks. Mookie Betts aka Wilson Wagers made his debut and was 1 for 3 with a walk.

Now it's a long homestand, starting with the last-place Cubs. We're very much alive in the East as we head into July!

Stat of the something: At around the halfway point, only three teams in the American League are more than three games over .500 at home.

With the packed house (the 2,000 Yankee fans left) cheering for the final strike (because the scoreboard that goes around the stadium said "2 Strikes" and showed clapping hands, a fact TV networks love to ignore since about 1976, as they conveniently avoid showing the board while showing the fans--know what's funny? When the person in charge forgets to put the graphic up and all the Yankee fans just sit there silent--see the Ortiz at bat in the 9th the night before. Note: They never forget the PC Richards whistle ad after a K. Where was I....), with two outs in the 9th and the score tied, Mike Napoli hit a laser-dong off the Yanks' new robot pitcher. Koji OTTed them in the bottom half, and the Red Sox grabbed a W.

Fox blamed the whole thing on the fact that they should have pitched around Napoli and gone after Drew. Forget the fact that Tanaka, who has already been crowned Cy Young, gave up the home run in the first place. He'd struck the guy out twice too. Suddenly the smart thing in a complete game is to pitch around the go-ahead run? Harold Reynolds even called it stupid pitching, because he saw Lester beat Verlander one time. ????????????????????????????????????

Did I mention how sweet it was that they were all standing and clapping and getting ready for the manifest destiny of some groundout-heavy game-winning rally in the bottom of the ninth, and we totally knocked a dong off of their Cy Young guy and won? And are defending world champions? As are the LA Kings? See what I did there? Apologies to Yankee fans who happen to be Devils fans or Islanders fans or any-other-team-fans. Actually no apologies because you should have gotten a smirk out of that line anyway, though overall you're still sad about Tanaka totally giving up a 9th-inning dong to lose the game tonight.

And did you see Solarte pull a Jeter and cheat a double play out of a line drive? Announcers could have talked more about that but they didn't. And on that one replay where Pedroia did the swimmy slide, didn't you think it was inconclusive? But they changed it anyway, very quickly, and I still wonder if the umps actually hear the announcers going "out" and influencing them, and/or if they watch angles of their own choosing or just watch the TV feed? And by umps I mean the one possible lazy and/or too-busy-texting-to-really-dissect-it umps who sits in the room on Park Ave. I mean how can you tell the tag is on a guy when the glove is in front of the leg? How do you know there isn't space in between? All this while focusing along with the network on said glove and assuming the hand hasn't touched the base yet when it's actually shielded by the fielder's leg? Whatever, we won. But still. Fix this crap.

Contest update: Unless the Red Sox score 36 runs in the next two days, my mom will win the "team runs in June" portion of the contest. And unless Shane Victorino miraculously returns and scores four runs in the next two days, Kim aka Dewey & Co. will win the "Victorino runs in June" portion. Kim apologized for getting her entry in with an hour and a half left in May, but she should have been anti-apologizing for waiting as long as possible before making a prediction. With Shane on the DL by then, she made a very smart guess of 2, and the guy didn't play a down all month. So congrats to Mom and Kim, you'll get your books soon.