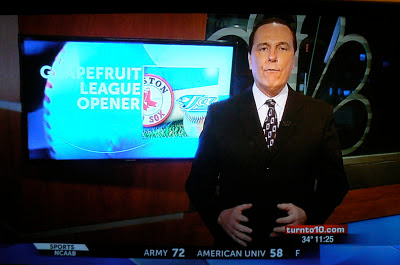 I knew Rhode Island's NBC station "Turn to 10" was one of the news outlets still using the old version of the Circle Sox four and a half years later, but that wasn't their only mistake today. They couldn't even get the other team right, as we played the Rays, not the Jays. But even if it was the Jays, they were using their old logo too (pre-2012)! So they were one team and seven total years off.

Am I nitpicking, or should the news actually get shit right? Or at least give us a sense that they might be trying?

The Red Sox in their home whites under the sun, Drinkwater and Kapstein in the front row...and NESN effing up.

I understand "Saltalamacchia" is a tough one, but not many people spell it with two esses: 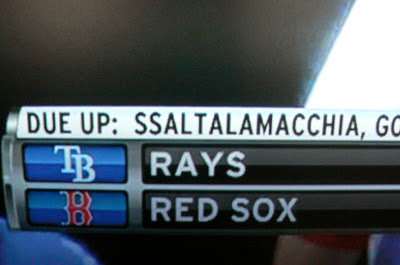 And some pitches were registering in the 50s: 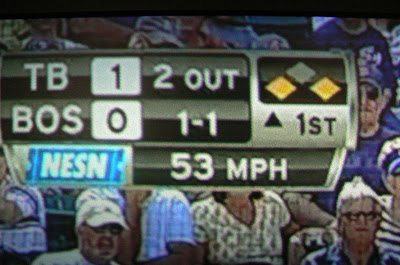 Note Drinkwater above, and Kapstein below: 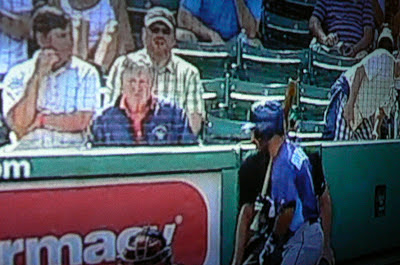 Lackey seemed to be throwing BP out there at first, but after loading the bases with nobody out, he got out of it with only one run allowed. As I type, it's 2-0 Rays in the somethingth inning.

NESN's opening theme is the same for now (except for some new faces--Ciriaco's in there now).

Funny moment when Don told us how Remy would be buying fans hot dogs again this year. Remy said "it got to be quite expensive." Don countered with, "well, you have a lot of money."

If you're out of NESN-land, it will also be shown at 3 a.m. on MLB Network.

The first exhibition game of the spring has been played. And it was the Red Sox beating Northeastern, 3-0. Awesome detail: The Red Sox batted in the bottom of the last inning, despite having been in the lead already. They tacked on two runs that didn't officially count.

In the second game, different Red Sox defeated BC, 11-1.

Red Sox baseball, 1:35 and 4:00 Thursday. I guarantee they win both games. This tells you who's playing and when.

So Will Middlebrooks beat Hanrahan in the beanbag-tossing contest today. I really hope NESN's coverage* of this isn't indicative of how games will be this year. I only saw a few rounds of this tournament, and more than once I saw them show you the guy tossing the beanbag and....that's it. We never saw the damn thing land, which is the one and only job of the person in charge of televising a beanbag-tossing contest. They even had a weird edit tonight where a bag disappeared. After rewinding (yes) I realized they showed two Middlebrooks throws in a row--either they missed one and had to edit in an older one, or there was controversy necessitating some editing. (It came right after there was a question about whether you can knock the other guy's bag in the hole--next throw, other guy's bag has disappeared, only to reappear later. Coincidence?)

What does DMD mean? Is this a company? If you go to the ticketing area of redsox.com, you see some seats called "DMD Field Box," which are the more expensive dugout-to-dugout field boxes. (The ones a little farther out cost 5 bucks less, a change they made a few years ago.) So is the DMD just referring to location? Like, Dugout, Middle, Dugout or something? If so, how come the dugout-to-dugout loge boxes aren't referred to as DMD? Is this a sponsorship, or a location notification that they forgot to use on the similarly divided loge seats?


*You probably thought I meant the "being jokingly serious about something that's not serious" routine. Eh, that was funny enough, though they did kind of take it to that level where it's almost embarrassing and you just want them to break into laughter and just forget about the mock-seriousness routine and get on with it.

Saw Dempster throwing the beanbags on N3SN tonight. (The only other episode I'd seen was Middlebrooks kicking ass and a baked Buchholz missing the board entirely.) I always favor the funny guys and/or ones who are natural and don't speak in cliches. Dempster is both. Hopefully he's actually good on the mound too.

On one of the 20/20s on the FAN today, the guy gave the scores and stuff, and then added, "How strong is baseball? Today in Fort Myers, five thousand people showed up to watch the Red Sox work out." With a lot of the fake fans falling away due to the team--god forbid--having a losing season, it was great to be reminded of all the real fans and how much we love our team regardless of how they're doing. (And to hear it on the New York station was a bonus.)

Then Aceves had to go killing my buzz with his lob-rific performance. It's funny, I'd just been saying to Kim how it's weird that he was able to stick around considering all the stuff that went on last year, and then he goes and starts effing around. Or something. Who knows what the hell went on there. I still kinda like the guy, but he keeps making himself harder and harder to defend.

You know how the weather-folk sometimes warn you about "blowing snow"? I never knew what they meant until today. I mean, I know what it looks like when snow blows around, but today I was driving along route 138, and every time I went along a patch of road with an open field next to it, it was as if someone was standing on the side with a firehose blowing it across the street. And not even on-and-off-and-on-and-off. Just on. A permanent speeding cloud of snow over the road. Zero visibility. You'd just hope nobody coming the other way would veer onto your side while in the middle of the whiteout. Then the sun set and the sky turned red, and while crawling through the snow-clouds I'd look left, right into them, and it created this dreamy snow-sherbet effect. Dangerous beauty and all, you know the drill.