Until We Come Up With A Slogan That's Different From The White Sox' One.

New slogan, new background! What I like about the background is that it's totally different from all the other team sites. No template followed. It's kinda weird and a little busy, but the B&W sets it off from the content it surrounds.

Oddly, a lot of other teams changed their background, but they all kept it in the "wraparound stadium shot" template.

More stuff from Hauls of Shame.

Good article at JoS about baseball/military. 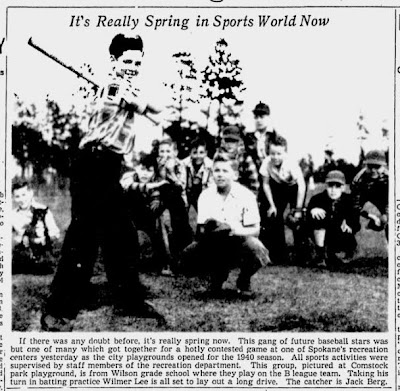 This isn't so much of an oddity--but I found it while looking for oddities. In 1940, these kids were playing ball at a Spokane playground, when a photographer snapped a shot of them. They were probably thrilled to see themselves in the paper the next day, labeled as "future baseball stars."

I thought it would be fun to see if either of the two children named went on to actually become baseball stars, even if it meant minor leaguers. Wilmer Lee seemed like a name you'd see on an old baseball card, so I looked him up first. Nothing. Then I tried the catcher, Jack Berg. This page came up. I read all about Berg's Junior Shoe Store in Spokane--now more than 80 years in business--and how the place was passed on to Jack from his mother in 1950. Forty years later, Jack passed it on to his son Chris, who ended up selling the company to a friend in 2009. There's even a picture of Jack on the page. I wrote to the e-mail address the site listed and asked about Jack.

A few days later, I got a reply from Jack Berg himself. He says he's been retired for 18 years and will turn 83 in April. So Jack didn't become a baseball star, but it seems he became something more important, a community star.

On Sunday, while driving to the supermarket, 2,200 miles from Spokane, Kim and I saw some kids playing baseball on the local Little League field. Between that and the fact that Jack Berg and his buddies are back in the paper (meaning the current version of "the paper," the Internet--my blog in this case), It's Really Spring in Sports World Now.

First I told you about AAA's commercial that uses the name "Allision Brown" (extra "i) on a membership card. Then I waited and waited to get a picture of it. In the meantime, I saw some of their other ads, and on all of the membership cards, normal names were used, as I told you in this update. Finally, after all this waiting, I have captured the holy grail--the Allision Brown spot was on TV today! Here it is: 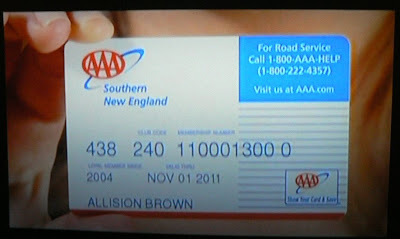 So it's official. Despite Kim's solid theory that they spelled it incorrectly to avoid identity theft (or something), this proves that it was just a mistake--here are the correct names: 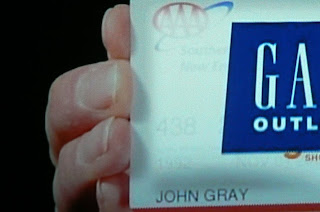 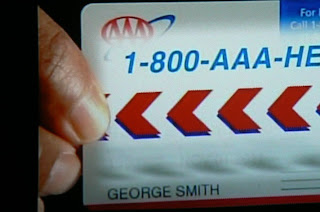 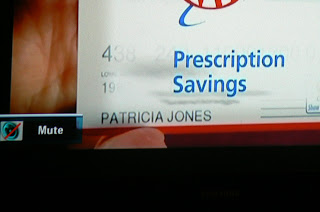 I am noticing now though that only Brown's card shows a complete number--but I think they all start like that, and then other stuff gets shown over it, the card acting like a little screen you can watch AAA benefits on.

But if we are all agreeing now that Allision Brown was just a mistake, I have to say, Terrible Job, AAA. It's a pretty easy name to spell. Did they preview the commercial to anybody at all before just throwing it out there--and leaving it playing for at least a year? And I guess no one noticed but me. (But I will say Good Job, AAA, for giving Kim & I membership cards with the Red Sox logo on it. We just signed up for it. Our names are spelled correctly.)

Just tuned into the game to see we're down 10-3 in the eighth. I checked to see what happened, and it wasn't Dice-K's fault. All he did was pitch five shutout innings, then getting the first two guys out in the sixth. Then, incredibly, this happens:

Finally we get the last out, but not before a 10-run rally, starting with two outs and nobody on. Miller faced 6 guys, they all scored. Dice officially gives up 2, Atchison 2.

A Hank In The Bucket 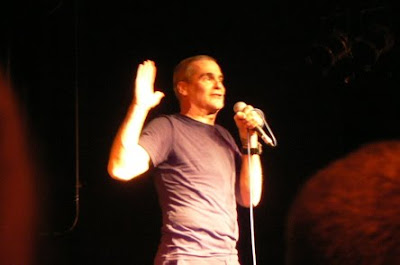 Henry Rollins is non-stop...when describing his non-stop life. Kim and I saw him speak at the Met Cafe in Pawtucket tonight. We thought we'd get there a few minutes before doors opening to get a good spot. And we found a line at least 50 people long already waiting outside. But we still got pretty good seats (they set up dozens of folding stairs in this small rock club) three rows from the stage. And in Rollins tradition, he came out exactly on time and was in KEN mode all night.

What impresses me most about this man is how he can talk for extended periods of time (2 hours 15 minutes tonight) without even stopping to think about what story he'll tell next. Kim compared it to a choose-your-own-adventure book*--he's got all these stories from his world travels, the telling of one is bound to spark another. And they're all hilarious.

Tonight he steamrolled through a hundred topics, all of which I'd be hard-ass pressed to remember right now, but I will give you one quote I made sure to scrawl down on a square of brain tissue:

"After reading 5 to 7 pages of Sarah Palin's book a day, I became so depressed that listening to the second Joy Division album actually lifted me up." Okay, it was way smoother than that. And I realize that if you don't know Joy Division the joke makes no sense. So maybe I should have used a different quote. Trust me, he had us laughing our asses off all night. If he puts out an album based on this tour, get it.

Photo of two heads and Henry Rollins by me.


*she actually said "corn maze" but I knew what she meant, and changed it to a slightly different analogy