A while ago I noticed Fenway's right field box seats had been split into "upper" and "lower," with the section numbers changed. But when buying tix, it still just said "right field box." Now, you can officially buy specifically upper or lower--both still go for $52. You can get 4 together for the Tampa series on the first homestand. And other games you can get 2. And yet more games you can get singles. They've also dumped more tix for that first homestand [edit: not just first homestand!], so if you wanted 2 in the loge or something [edit--okay, I see what they dumped, it's those $95 loge, in other words, the few sections of loge that are farthest from the plate], they've got those.

I'm also guessing you'll soon be able to add food credits to your tickets when buying them. As a (10-game) season ticket holder, I can now buy credits to add to my tickets, so when I buy food, I just have them scan the barcode. But I noticed on the web page dedicated to this, they talk about three types of credits. Patron-added, which is what I'd be doing, Sponsor-added, and Venue-added. Here's how they define that last one:

"Venue Value: These are Sox Bux that either came with the ticket when initially purchased..."

This implies you'll be able to buy a Red Sox ticket with value added to it, so you can buy food with your ticket. They already have toyed with this concept with the Roof Deck tix that come with food credits--but I don't know if that's done through the bar code on the ticket. But if it is, they've already got the system underway, and I believe they will soon let you buy any ticket with value pre-added.

Met some friends at Bobby V's in Stamford tonight. Guess who I saw. Bobby V! No pictures available.

Went down to Watch Hill for the first time yesterday. This is the westernmost point of Rhode Island. Look on the map here--where it says Napatree Point. At that spot you're less than 2 miles from New York state, as Fishers Island is just off the Connecticut coast.

The video I shot was from the middle of that long spit. (It's a good mile-and-a-half to the end of the spit.) For some reason, the sound of the ocean was like a wind tunnel right there. Not normal wave-crashing sound or general ocean roar, but a repeating, ascending whoosh that was really cool. Will definitely have to come back in the summer.

Buchholz vs. Tigers, now. But also, Chan Tech vs. Goliath U. all day!

Guess What I Got Today

Lackey good today in win. Friday: Tigers at 1, Rays at 7.

Sid Lester did fairly well Wednesday in his first start after being named the Opening Day starter. Ivan "doesn't go" Nova* pitched a 6-inning no-hitter for the Yanks against the O's. I like that this probably means Yankee fans think he'll be Cy Young this year. The souvenir stores could get that festering pile of unsold Joba Rules T-shirts and change two letters.

The Red Sox play the Mets today at 1:05 in a rematch of the 1986...Jimmy Fund charity exhibition game.

Smarch Smadness starts today! The first four days of that tournament are some of my favorite days of the year. It's the time when sports movies actually happen in real life. Let's go East Something State!

Nate Dogg is dead! "Regulate" was possibly the best hip hop song of the 90s. It was Warren G's song, but Nate did half the vocals. Here's the unclean version of the song. "Adults," you'll recognize the sample from your old Michael McDonald records. This is one of those songs that I feel like I reference at least once a week. (I'd link to the actual video but they cut out words. What's wrong with "high"? I still don't get why that song and Light My Fire have "high/higher" taken out on the radio, but G 'n' R's "when you're high you never ever wanna come down" was never cut.)

It's doubly sad, because back in the G-Funk era, we used to hang around with this guy Nate, who of course was called Nate Dogg, too. A couple years ago, that Nate died, and now the actual Nate Dogg is gone.

Click here not only to donate to Japan, but to see Dice-K and Okajima's video plea--in English. It's a hard language. I couldn't speak Japanese if my life depended on it. But those guys made an attempt at a language they're far from fluent in, and not at all comfortable with in public, while people's lives actually are depending on it.

Dice-K pitches against the Tigers, right now. He's been shitty so far, leading some to do that classic thing where they judge an entire career strictly on recent activity--including games that don't even count. Hopefully Dice can get back on prov. track today and be ready to dominate this season.

Update, 2:34: Five shutout innings for Dice. Boom goes the dynamite. Guess the no-memz will have to look for a new target--I see Carl Crawford's hitting under .200 so far in a couple games that don't count. Trade him!

"I don't think the bird came out of it as well as the Yankees did," said Heidi Watney about the Yanks' bus hitting a bird with its winfield--er, windshield on the way to Ft. Myers.

Kalish bolting for third on a grounder was hilarious, considering there was a runner already there. Cameron and Ortiz giving him crap and laughing their asses off about it was also pretty funny.

Does Kapstein have a gigantic phone or what? Matches his regular season headphones.

Great to see a Red Sox catcher throw out a good base stealer. Nice job, Sodium Boy. Hey when Cervelli's back, our catcher and theirs could combine to be MacchiaVelli. Availability, C.

Good job by pretty much all our pitchers tonight.

Here's Jimmy Stewart performing a "handie," which seems to be a visual character played by using your hands and face. There's another one that's even more racist than that one. The caption (from 1936) says it's a "new game" but also says Stewart will be "directing" handies. I have looked for more information but I've got nothing. Can someone please tell me what the hell is going on? Any of you older types remember doing this on the playground? Is this how you used to pass the time when you weren't swappin' toads for buffalo nickels?

This isn't about MLB.com. This is about lots of news sources who do the same thing. But MLB is a good example to use. Here's the page with their latest news. Click on any of those articles from Sunday forward. You'll notice at the top of each one they give the time of day, followed by "EST." This stands for Eastern Standard Time. But as you hopefully know by now, (almost) all of us here in North America switched over to daylight time early Sunday morning. Therefore the time here in the eastern time zone should be shown as "EDT," Eastern Daylight Time.

This isn't a case of "oh well it just switched, give 'em a couple days, it's like accidentally writing the previous year on your checks (my what?) in January." This happens everywhere, year round. I think a lot of people might think "EST" stands for "eastern" as opposed to being an acronym, because they'll always say EST, no matter what time of year it is. That and people are forgetting to update templates.

One way to never get it wrong would be to just use "ET" (eastern time) all the time. Yet people seem to want to specify, despite the fact that they don't know or care that they're getting it wrong.

I admit that this can't actually cause confusion. It's not like I'll see EST on a schedule during daylight time and show up an hour earlier. The time isn't affected by putting EST or EDT or EQW after it--it's only that first letter that can actually change when something happens. As long as you say the right time zone, you can call it "eastern cannibalism time" and people will still know the time you mean. But if you are gonna choose between the two acceptable ones, get it right! There's no "standard" time right now through November 6th. It's like 8 f'clock. It doesn't exist.

As for MLB, I'm sure it's their template that's at fault. I see last November they did know to make a switch, but they went from plain ET to EST. And now we've gone to daylight and they've stuck with EST. Like I said, lots of sources all around the 'net are guilty of this. Do a news search and you'll see what I mean. I just searched a random stretch of time that's completely within daylight time (7/1/2009 through 8/31/2009) for the term "7:00 pm EDT" and came up with 6 pages worth of Google results. In that same stretch, I searched "7:00 pm EST"--and 9 pages came up! That's 60% wrong--I'd be pissed at 10%!

Even with the last company I worked for, I noticed that all their web meeting things had times listed and they just went with "EST" all year long. I tried to tell them to change it but they didn't seem to understand--then they finally changed it only on the page I showed them as an example. (And I was the proofreader so I was supposed to be finding mistakes. But they fired me anyway.)


To completely change the subject, since I (I mean my mentor Tobiasson) have recently visited two abandoned New England amusement parks and posted pictures, I thought it would be cool to show you a picture of me at another old park, from around 2002. I'm pretty sure this completes the series, but if I think of another dead park site I've been to in the past or go to another one in the future, I'll let the Internet know. 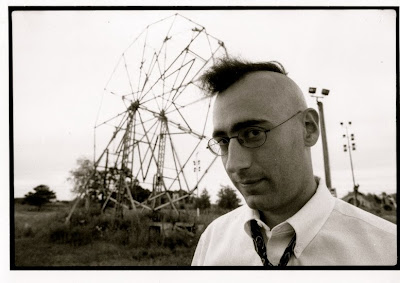 Three odd things about this photo: 1. The half-fro-hawk. 2. Seriousness. It's rare I make a serious face as opposed to doing the "hey it's a camera so I'll be purposely wacky since seriousness would surely appear contrived" look. (Though just having that haircut and posing in front of a ferris wheel imply wackiness anyway.) 3. A fucking shirt and tie! Weddings and funerals only, if that, my friend. I think this was after a wedding in the Salisbury Beach/Hampton Beach area, but I can't find any reference to this ferris wheel online. Photo by Lys Guillorn.

"You Know How I Hate Losin' To The Pie-Ritz!"

Beckett looked fine today. Tired at the end, and then Atchison made his line look worse. Cameron's been hitting the ball this spring. Lars and Darnell went deep today. We lost 9-4.

And NESN spells "piece" wrong while forgetting to end a question with a question mark. (You could use the excuse that that's how the question from the fan appeared, but come on, they're supposed to be cleaning those up.) 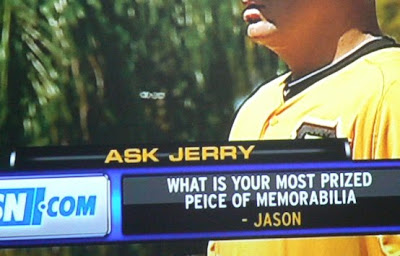 And from the other day, a funny shot of Lackey: 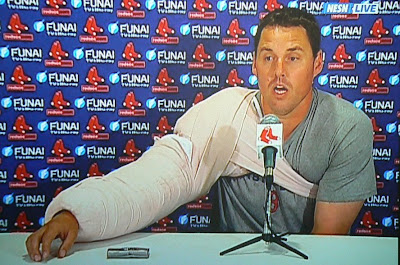 All screen shots taken from MONESN.

I don't even remember what I was looking up, but I came across the site of a Vermont TV station. In its sports section, it has an icon for each of its "local" teams. I guess since Vermont borders New York state, they include the New York teams, including the tri-state area (meaning NY-NJ-CT), as well as the New England teams, plus Montreal. So this station actually covers the Red Sox, Yankees, and Mets, the Patriots, Bills, Giants, and Jets, the Celtics, Knicks, and Nets, the Bruins, Sabres, Rangers, Islanders, Devils, and Canadiens, and all the sports at Dartmouth and UVM.

That has to be a record.