Man, less and less thought are goin' into these movies. But I just wanted to do something quick. I have another shot of Mueller doing a really cool thing. Perhaps I can make a movie out of that, too, if I can find it.

It's after midnight. The trains are still running, but there's no deal between the city and the TWU. So....why are the trains still running? Chan's trying to explain it to me, with no success.

Much like the Theo contract talks and this season's AL East race, the end has come, but everyone's still confused.

They made all these contingency plans in case of a strike. The deadline is here, there's no progress, but there's still no strike. Oh, well. Like I said, I walk to work. Terrible job, everyone.

There was just a guy on TV named Manny Ortiz, getting interviewed about the possible transit strike tonight. I walk to work, so I'd be gold. Chan would have to get a bike, though. Scratch that--I just asked him what he'd do in the case of a strike, and he pointed downward, to imply that he'd work from home. Way to wuss out, Chan. Get a bike, dude.

What Red Sox record does Rich Gedman share with Jason Varitek? (And no scrolling through my archives, because I think I may have mentioned this before.) 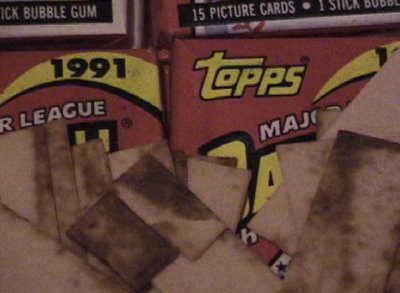 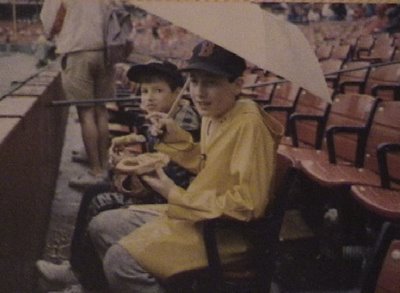 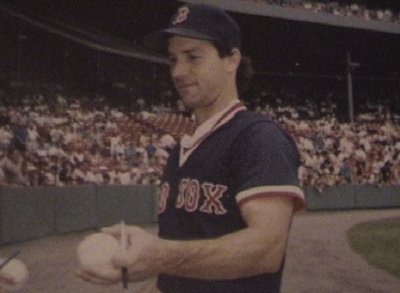 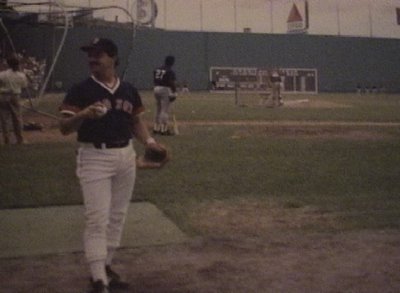 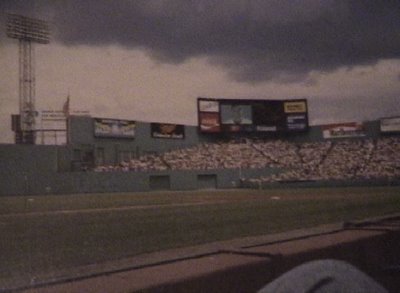 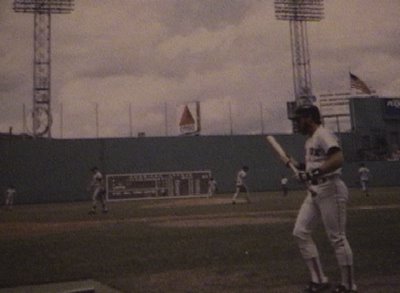 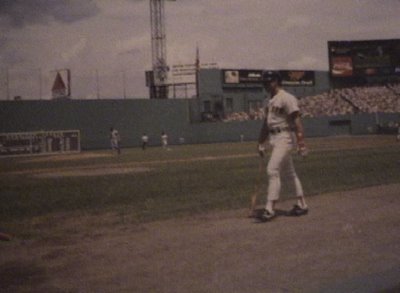 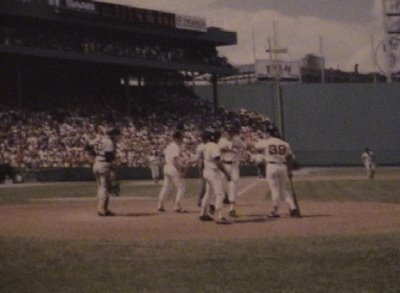 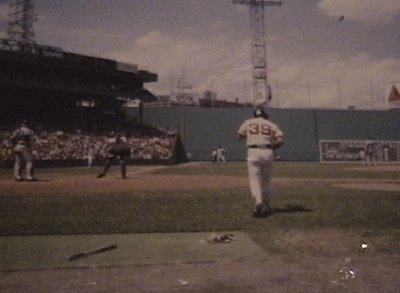 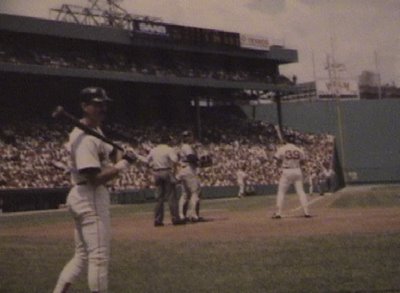 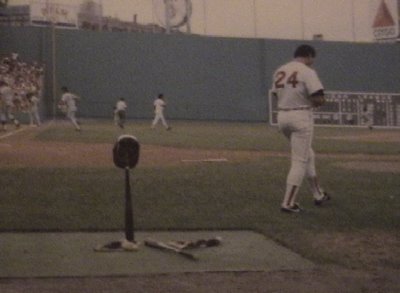 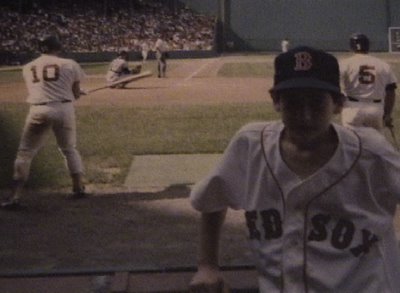 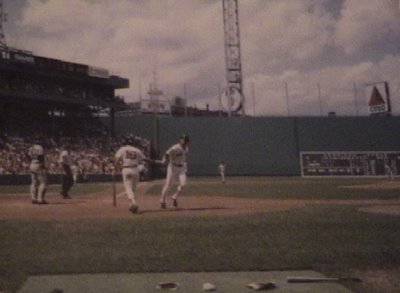 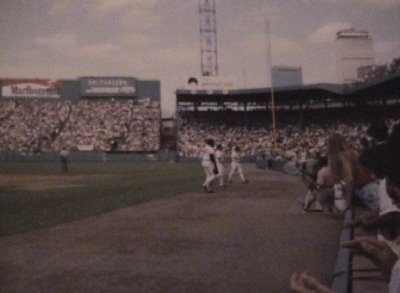 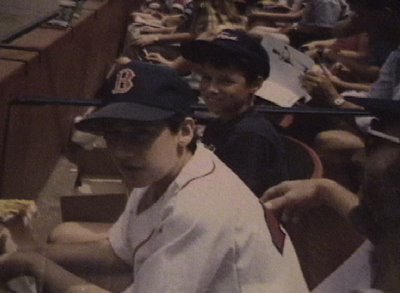 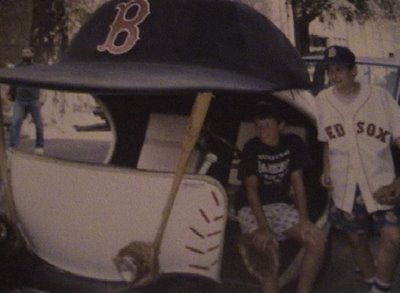 The adventures of me and Chan at The Colbert Report:

I took the 6 to the E and saved a spot on line at West 54th between 10th and 11th for Chan. They have a covering over the line, which goes down an alley, so I wasn't totally frozen. But after an hour I was quite uncomfortable. My thumbs fell asleep. Chan asked why. I had no answer. He brought a Kit Kat and M&Ms and told me I could choose which one I wanted. It was a tough call, but I opted for the K-Squared. Good job by Chan here, as I didn't eat beforehand.

After an hour and a half, we got little laminated cards with numbers 31 & 32 on them. We were escorted through a metal detector into a small room with a TV that was showing Jeopardy! Smart audience that Colbert attracts, most of us were yelling out questions, even though the sound was off. But I discovered lip-reading isn't too hard.

Then we were given some instructions about cheering loud and turning off cell phones, before being brought into the studio in the order of our laminated cards.

Chan & I ended up in the last row. Since there are only five rows, this was okay. The stage manager gave us more instructions, and then a comedian came up and warmed us up. It was cool just looking at the Report's set up close.

Steven came out and took some questions. Some young dudes lifted their shirts to reveal the word "Colbert" painted across their chests. Colbert was really funny in this improvisational pre-show role, telling us how he felt like we were only cheering him because his mom must have told us to, since she used to encourage people to listen to what her brilliant son (one of eleven kids) had to say.

Everything was really loud. The mic levels were set to earache.

Colbert seems to enjoy the rock. During commercials we heard Cheap Trick (who wrote the show's theme song), some old Foo Fighters, and a Screaming Trees tune.

That scroll across the bottom of Steven's desk isn't real. It's just cardboard, with words on it, and a red light behind it.

Chan & I have been to Letterman tapings in the past. In those, everything goes. They do it in real time and edit if they have to later. On the Report, however, Steven does screw up. And when he does, they stop the show, and go back and fix it. It only happened twice, but once it was in a really key spot. During "The Word," he lost it and just stopped. They realized that there had been no stopping point, so they had to do the entire Word over. This was a shame, because it was so funny the first time, and we as an audience had such a great reaction to it. So the second time, we had to fake the laughs. We just watched the final product at home, and it definitely was funnier the first time--the take you'll never see. Too bad.

During these mess-ups, Steven kept us laughing by making fun of himself. This also gave us a chance to see how these shows work.

Harry Smith was kind of a tool, but it was a pretty funny interview.

Seeing the show in person was like going to a concert. Everybody was just so psyched to see Colbert. He's so damn funny. I'll be back there January 9th, and I'll be bringing those hand- and foot-warmers.

I recommend going. Go to the Comedy Central website and request tickets. They're free.

Afterwards, we went to Zen Palate. I got Curry Supreme, as always.

The description of my night is now over.

I just watched the press conference where Jed and Ben, or as I call them, Bed, were announced as co-GMs.

And I wish I had that time back.

This stuff is just utterly boring to me. Great, we have two GMs now. They're young, they're nerds. Fine. Just go to your office and get us some really good players. If you don't know how to do it, that's okay, as long as Theo's on the speed dial. Or whatever speed dial is called now. Extreme dial? XD?

Right now I'm off to see something with the exact opposite entertainment value from that press conference: A taping of The Colbert Report. The guest is Harry Smith. Not the worst guest you could draw. And his name rhymes with mine, so he's got that goin' for him.

And, no, I don't really call them "Bed." It's just the first thing that came to mind, and I felt I should give them a nickname. I'll have to work on a much, much better one.

So I'm driving on 84, and I look over at the carpool lane to see a woman zipping past me with no passengers in her car. There was what appeared to be a car seat in the back, though. I only noticed this because she seemed to be attending to a baby at the moment she went by me, reaching back to give it a bottle or whatever.

Could this have been a ploy? Do you think she has a doll in the car seat, and just drives in the carpool lane, making sure everyone notices her reaching back?

Even if it is a living infant, does this really qualify as a "carpool"? Does the baby drive her to work on odd days?

What's next, a guy with multiple personalities in the carpool lane?

Or how about this: "You've made a mistake, officer. You see, god is my co-pilot."

So, Theo might be coming back, Manny might be getting traded, and Clemens might be back. All those mights and a quarter'll get you something something. A source close to a guy familiar with operations of the organization that tells this blogger what to write says that Jere is sick of rumors, and that you pretty much know his opinions and anything else he writes would just add to the nonsense of the newspaper selling contest that is the baseball offseason.

I didn't get the invite for Xmas at Fenway, but I was up early yesterday for the internet sale.

8:52: Wake up.
9:00: Enter virtual waiting room.
9:15: Buy ultra-sweet field box seats for a Saturday game against Texas.
Like, an hour later: Get 4 ultra-cheap upper bleacher seats for another Saturday game.

I've already got a 10-game plan, so trying for any Sox Pax was unnecessary. I basically just waited for my chance, then checked for the sweetest seats possible for that Texas game. Turns out I got through early enough to get field box. So that'll be my one game where I actually have good seats for the season. "Good" meaning "rich folks-good." My bleacher seats are great, too.

Then I opened another window, and just let it do its thing. Just before I gave up on it, it let me through. I figured it would be too late to get another weekend game, or 4 seats together, or any $12 seat-action. But it wasn't too late for any of those things. So I'll be way up under the message board with three of my luckiest friends for the Saturday May game against the Orioles.

The seating chart for Fenway Park has been improved. They added some info that you might never figure out from looking at the old one. And the new pavilion level behind home plate is represented on there. Those would be some sweet seats.

Oh, here's something to lighten up the mood. While recently going through my old baseball card collection looking for Gedmans, I found a Topps baseball sticker of Jim Rice. It was from a year when they were really getting the most out of their manufacturing process, putting multiple players on one sticker-back. So there were these little tiny, I'd say half-inch diameter stickers. So I took this little circular Jim Rice and placed it over the power button on my laptop. Now I just press Jim Ed's face to power up.

Take note, Hall of Fame. Press Jim's face. Power up that hall with a Jim Rice induction ceremony next year.

I also put a Ralph Wiggum sticker over the apple that lights up on the top of the laptop. The light of the apple shines right through his belly, like he just ate it.