There's a Bill Hicks routine were Bill goes into the mythical president of CBS' office with a great idea for a TV show. He tells them of all the well-written characters and groundbreaking plots and artistic storylines. The guy looks at him and says "Will there be titty?"

That says so much about our society. And I thought of it because today I noticed that over at Putfile, one of my videos had a steep increase in traffic. Was it the one that took days to make, with great shots of jubilant Red Sox players, and the moon being hidden by the earth's shadow? Nope. Was it the one where Manny Ramirez interacts with fans 300 feet away during a game? Some other word for "No." It was the two-second shot of two dudes playin' grabass.

The parade video has been viewed 250 times or so. The Manny one, about 75 times. The Millar-Mirabelli butt-grabbing, today alone, went from about 50 views to 4500. I checked Putfile's "Top 50," and sure enough it's on there. Of course I didn't put my blog name on any of these. You can click on the name of the uploader (me) and it takes you to another page which has my blog's address, but apparently butt-grabbin' America doesn't have time to be clicking and clicking all over the place.

I also noticed there are a bunch of comments on that clip, most from middle school types saying how the guys are gay and stuff. You know, even if there was some official guidebook where you could look up "Grabs teammates ass on field," and it would say "Person is definitley gay," well, so what? Gay, not gay, it's just a funny moment. I can't wait til the day when straightness is made fun of by the masses. As well as whiteness. And maleness. And as a white male breeder, I'd gladly sacrifice having being made fun of myself if it meant getting to see the racist, sexist, and homophobic people having to deal with the same fate.

The World's Self-Proclaimed Most Famous Arena

Chan attended college at the University of Florida in Gainesville. Class of '97. When he found out their basketball team was in town for the "2005 Coaches vs. Cancer Classic Benefitting the Jimmy V Foundation Early Season Four-Team Tournament," or whatever, he asked me if I wanted to go. I told him I was in if we got the ten-dollar seats. He agreed.

I've always thought of Madison Square Garden as a rather boring place. Any basketball/hockey arena is like that to me, though, the way they all kind of look the same, and how the court always has the same dimensions as every other court. In fact, as I ate my pretzel there tonight, it made me kind of sad that I was eating a food I associate with a baseball game and there was no baseball for miles around.

But it was definitely cool to see a basketball game for the first time in years.

Florida was playing Syracuse in the championship game. We got there early, and saw the second half of Wake Forest-Texas Tech, along with the two overtimes that followed it. Between games, the seats started filling with "Orange" fans. I guess "Orangemen" is out, much like "Redmen" has become "Red Storm." (If you don't follow college sports, it's not the Florida Oranges, although that would make sense. It's the Florida Gators. And Syracuse Orange.) When the teams were announced, Chan realized he was in the minority.

I immediately got a sense of arrogance from these Syracuse fans. Maybe it was just because there were more of them, but they just seemed like "We're here to see our team destroy whoever it is we're playing, and we're gonna act all psyched even though these November games don't mean shit, and we're gonna complain about every call that doesn't go our way."

From that alone, I determined that the ranked Orange were overconfident and overrated, and could be beaten by unranked Florida. So I was on Chan's side for the night.

And we rode that Gator to the promised land, cheering loudly as the Syracuse fans were putting their coats on with two minutes left.

It was fun. And I've never seen a team so excited to win a game so early in the season. Maybe it was the way they came into the big city, and beat the semi-home team as an underdog.

Saw four Sox fans. One right when we got into the Garden, which got me thinkin' about it. Then another right near us. Then a woman on our way out with a heavy, blue Sox jacket that said "Boston" across the front. Then a dude on the street. Only saw slightly more yankee gear than that tonight. But, as usual, all the Sox clothing looked worn and cozy, while the yankee merch was fresh from the (discount) rack and unpleasing to the eye with it's scary arachnid.

To answer AJM, here's the Xmas Eve '04 post I did about the Red Sox road jersey controversy of the mid-eighties. (See Nipper picture below for "BO/STON" style--see most any Sox player in an 80's road uni for "BOS/TON" style.)

Also, no answers on the latest quiz. Here's a clue that may give it away. The words are names. The words again being "morning" and "bump." What's the connection? Someone must know.

Al Nipper is back...as the Red Sox bullpen coach. Could Rich Gedman be far behind? Nipper did plenty of pitching to Geddy in the 80s. He knows of the masterful game-calling that only Rich could provide a hurler. Since Nipper actually has the job that Rich would be most suited for, they'd have to hire him as...bullpen liason? Pat recently suggested slotting Geddy into the GM role, as you may have heard there's a vacancy there. Whatever the position, give Gedman a chance. Many people are swearing off the '06 season. Get Geddy back, get the fans back. Nipper is a start, but Gedman is the final piece. 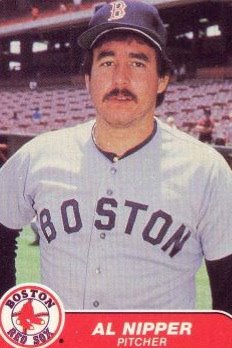 The last time I saw Nipper live was when Pat & I saw a Royals-White Sox game in Chicago in 2001. I think. He was the Royals' pitching coach at the time. Above he's shown sporting the flat-brim, crooked-hat style so popular with the kids today. Also note the BO/STON style road jersey. This former uniform controversy was talked about/solved on this blog a while back.

Here's a site that the wacky Nipper would probably enjoy.

My video of Millar grabbing and spanking Mirabelli's ass is now on line! Click here.

What's the baseball connection between the words "morning" and "bump"?

Jackie Jensen, Elston Howard, Don Baylor, Roger Clemens, Jose Canseco, and Rickey Henderson are the only MVP winners to have done what?

Bonus point if you can tell me which one of them has a connection to Ghostbusters 2, and why.

From The Evil Desk Of Big Stein

"A-Rod demonstrates the talent, hard work, and dedication of a true winner."

And Derek Jeter won this year's "Continental Airlines Work Hard, Fly Right Player of the Year." So we got that goin for us, too! And let's hold off on Don Mattingly's "legend" status for the time being, huh? And Joe Gordon's lifetime average was .268 (.243 in postseason), and in seven seasons with the yanks, led the AL in errors four times. Also not very legendary.

"All" meaning roughly half of New York baseball fans, who comprise maybe an eighth of the city's population, if that. So, you know, "all," "a sixteenth," same thing.

First, about Andrew's answer: I gotta figure Broadway Aleck Smith was named after, you know, Broadway, since he was born in NYC. And he was buried at Woodlawn in The Bronx (like the Fordham Flash). So you get a point.

The guy I was thinking of, though, was Boardwalk Brown. He was discovered playing in the sandlots near Atlantic City. Played in the early 1900s. Buried in nearby Pomona, NJ.

This just in--Ortiz comes in second to the decidedly non-clutch A-Rod. TJ. But it'll make Papi want to do even better next year, if that's possible.