Two In A Proverbial Row 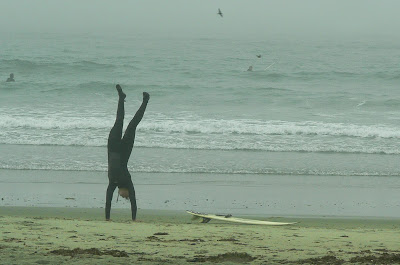 Sox beat Tribe by a lot. Two in a row. Just keep doing that. Winning and whatnot. Warning: Morgan's Magic has been evoked. The guy I see at a certain store once a week who is a diehard like me said on Thursday that we need an MM-style streak. We haven't lost since!

Pictured: Foggy, rainy day in Rhode Island today, but the surfers were having a ball.

But I can't write anything due to lingering technology problems. Stupid technology.

Wed hadn't won a 1-0 game since April of 2012 before tonight. Not including the playoff win against the Tigers last October. Nice job by Workman tonight. Yanks in Seattle right now, I'm going to bed. Wake me up when they lose.

Tonight's lumber slumber in Balmer makes last night's game the first win or loss that wasn't part of a streak in...at least 23 games anyway. Weird. Tomorrow it's the battle of the Men, Work against Till. Yanks were rained out.

Eight games into June, the Sox have 26 runs. So do the math and see how well you're doing in the contest. Victorino, of course, is at zero runs.

Something really cool happened today. My mom was telling she had pictures of my grandma in front of a ballpark in Pittsfield circa the 1920s. I immediately hoped it was Wahconah Park, but as far as I knew it could have been a high school field. Pretty soon she was telling me player names that were listed on a chalkboard in the background and I was figuring out the teams involved--it was Waconah. I have yet to see the pics but I will have to post them here and give you all the details on the year and hopefully exact date of the game. Fun.

We were two outs from losing our 6th in a row, but Papi hit a no-doubter off of Joba, a three-run mega-dong that made it 5-3 us. So we salvage a game out of the shitty weekend in Detroit. 10 losses, then 7 wins, then 5 losses, we're like Fat Oprah/Skinny Oprah. Hopefully we stay fat with a few more wins in a row now.

If you're looking for positives, we're 8-5 in our last 13, while the Rays are 1-12 and the Yanks are 5-8. And the O's are 6-7. So we've gained on those guys since the 10-game pooping streak, and incredibly we're just 3.5 out of second place. Unfortunately the 2013-on-paper Blue Jays exist this year and are way out in front of everybody. Just gotta hope those jerks fall back to their 2013-on-field ways at some point. If they don't, well, we're 5 out of a playoff spot with a hundred games remaining.