Today is the day. Can you believe it? Gordon Edes is posting pictures on this page. (Unfortunately the quality of the photos looks more like '94 than '14.)

Remember Pursue the Pennant? Pretty sweet dice-rolling baseball game that was a bit more kid-friendly than Strat-o-Matic and Statis Pro, though I played them all as a young baseball nerd. But now I see there was a game called "Pennant Pursuit," which was a Red Sox-themed game that included trivia as well as dice. Here's an article about it from the Phoenix, September 1986: 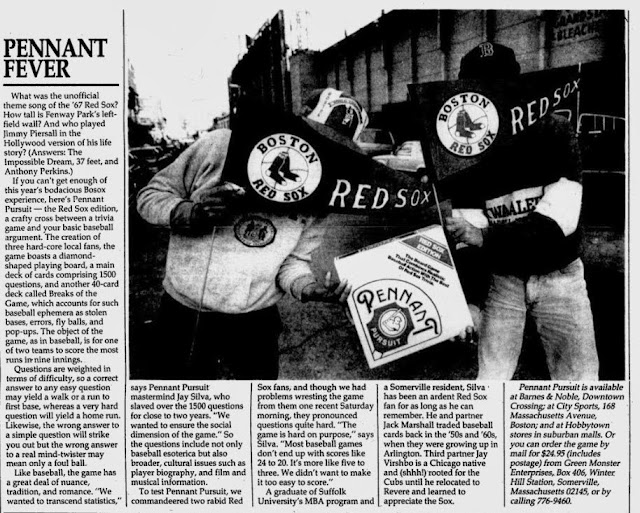 I see PTP started in '85. So these guys could have just ripped off that title, but then again, maybe they had the idea first and PTP stole it was PP was still trying to get its game on the market. Anybody know anything about this? PTP doesn't even have a Wikipedia page!

Shirley Temple dies, and that night, the supermarket is out of grenadine. Coincidence?

Meanwhile, much like how the Southeast is getting hit with an ice storm days after barely surviving another, the world has to go through another goddamn year-long "it's all about me" bullshit Yankee retirement celebration. Hopefully this one ends with a Red Sox championship, too.

Not Here To Start No Trouble

This got lost in the Sooper Bowl shuffle last weekend, so I'll post it here again:


I'm pissed. I decided to go to Opening Day in Baltimore, to see the first Red Sox game of 2014. Plans were made with our Baltimore friends, days off were taken. I knew I wasn't gonna waltz into the on-sale and score front row seats at Camden Yards, but I did assume I'd have a chance to buy tickets for this event, and I had planned to get up early tomorrow and do my thing. Nope: