Remember, after each drawing in The Lotteries, they put some tix on sale by phone. Tommorow's phone sale is for Monster tickets. I get them this way every year. (SRO, of course.) Remember, this is for people who didn't win the lottery. So if you lost, work those phones tomorrow at 2. The info is in this press release.

I write this Thursday night, but I must have forgotten to hit that all-important "publish" button. So here's a 24-hour old post exactly how it should have appeared here:

An underrated line (is it even "rated"?) from Ghostbusters 2 for your Val Day: click this underlined text

(This line in no way reflects how my Val Day has gone. It's just funny.)

(Actually, the line kind of sums up last baseball season. If you think of it as one extended "day" of Bobby Valentine.)

Don't Worry, The Man Holding The Bloody Knife Will Always Be One Of You

Bright move, Youk. This is actually perfect. He lost all that love from us, now he's got Yankee fans hating him before he had a chance to make his first error. Just like the douches who preceded him, he's a man with no country, which is what every soul-selling phony deserves.

The Most Convenient Right Turn Ever

A few videos from the Russian meteorite.

In the fourth one down (also here), the driver makes a right turn at the perfect moment, to see this thing streak across the sky, after a few seconds of "it's comin' right for us!"-ness.

Ya know, meteorites are screwed. They can't just come and destroy stuff in wondrous fashion, because everybody's gonna think it's some kind of secret missile fired by Obama at their gun stashes or their white-only country clubs or something. I wish wish could just all enjoy a good natural disaster for what it is.

One Red Soxy thing I've never done is gone to spring training. But this is finally the year! Not going to a home game, though. I picked a different Florida city. You'll find out which one it is afterwards, as I don't like to "tell the Internet where/when I'm going."

It's almost New Slogan Season. I've only seen one new one so far: the Dodgers, with "A Whole New Blue." Which is much funnier when spelled "a hole knew blew."

The Astros jumped into the top spot in the AL West, alphabetically anyway. Now the hat logos of that division are all Rammstein'd out: H A A's S T

I heard Francesa say the other day that the Red Sox win total would be "low 70s." Today he finally admitted that he hadn't noticed some of the pieces we picked up in the offseason and that we're better than he thought. (Bonus Francesa story: The other day he was talking about managers and how they often bring coaches with them to different jobs. He noted how "Billy Martin" didn't get to do that last year and had coaches who didn't even talk to him. He said it twice. I used the context to determine he meant Bobby Valentine.)

Isn't it funny when sports guys say how it's such a waste of time when Congress goes after baseball players? Don't those guys realize that what they do--talk about sports all day--is what most people in the world consider a waste of time in the first place? If you get paid to talk sports but you feel the need to proclaim that sports aren't all that important, why not quit your job? Or at least give your paychecks to charity.

Have you seen the interactive Fenway seating chart? Much of the grandstand is out of view! You have to enter a section at the bottom to see those. The "classic" chart is now relegated to the ticketing pages of individual games. And how come I can't "use the map" to buy the exact seat I want, like they had last year? And what happened to those tickets that you have put directly into your credit card?

I think this is finally the year it comes out that Jeter juiced. And that day, of course, will be the day America decides it's okay to do steroids.

Pitchers/catchers officially report today. NESN has done some shows from down there, I have yet to see one. But there's one tonight at 6:00. Watch it.

Didn't I just bring up Nice & Smooth? Now I get this e-mail from Amazon saying that I can play songs for free off that very album, because I bought it on cd fourteen years ago!* 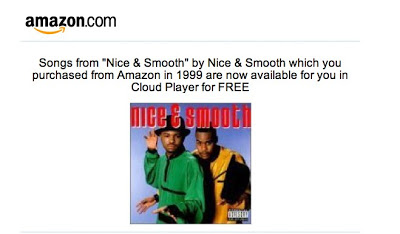 I had heard that 'zon was doing something to try and top iTunes, but I didn't know it was retroactive to the beginning of the world. So that's cool, I guess. I wonder if I'll be getting these e-mails every day for a while, telling me I have access to all the songs I bought on cd from them over the years.

Also, I love references to the Internet from last millennium, especially ones involving myself. If that makes any sense. Like, one of the first online purchases I made was a South Park t-shirt, in 1997. Along with tickets to the Kilborn-hosted Daily Show around the same time. ("The Channel of Fun" must have been one of the first to realize this online purchasing thing was the way to go.) I guess it didn't feel that weird at the time, since we were already used to buying all kinds of crap over the phone. But at the same time, it was a totally new thing that we didn't even know would catch on. I remember Pat and I mocking a url on a Peter Pan bus because, you know, why would anyone have any reason to "check out Peter Pan on the web"? It never even occurred to us that buying bus/plane/train tickets would become something you'd do online without even considering any other way. Makes perfect sense now. (Although I'm sure a lot of the Peter Pan clientele are still dialing rotary phones to make their reservations.)

*By the way, this doesn't mean I discovered Nice & Smooth in 1999. I was late, but not that late. Pat and Steve O'Keefe (via Jim Vernocchi I believe) were playing that stuff on a mix tape in the car during senior year when we'd escape to the mall during lunch constantly. Along with EPMD and Brand Nubian and some other things. That was '92. I guess it wasn't until '99 that I decided to upgrade to a cd version. So please add 7 years of street cred to whatever you pictured in your head when you saw the picture above. Thank you.


That's from Saturday. "The table" had 15 inches, but the snow was blowing sideways so who knows what the true Providence total is. As you can see I measured 21" at one of the drifts, and the plow piles are over our heads. The town in CT where my aunt lives got FORTY inches--those plow piles must be huge. But according to my dad and sister, both in CT, they haven't even SEEN any plows. I guess we were lucky here in Providence, with a relatively low total, plowing done, and no power-loss. The sledding was okay, I even sledded (slad? slud?) right out the front door, since the stairs were just a smooth slope. But I sunk right into the wet, heavy snow. The shoveling took forever, and our backs are killing us. But that's northeast livin' and whatnot.

Pics from the day after the blizz: 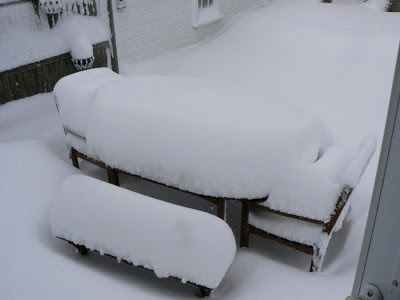 Final shot of that table that I was using to chart the progress. Here's one that shows the before and after: 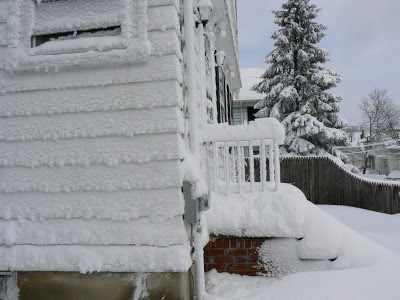 The house, looking all Day After Tomorrow-y. 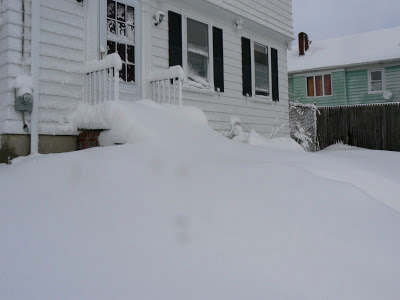 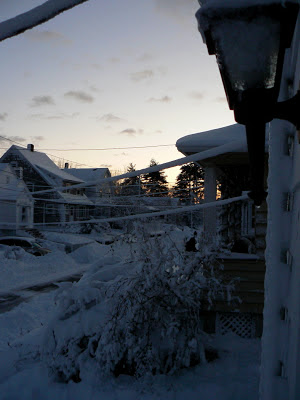 Last shot of the day at sunset, with the plow piles visible. Look way in the back and you can see a guy who's, like, not as tall as the piles.