A few weeks ago I saw a piece about Red Sox prospect Bryce Brentz and I thought he was a pretty cool guy. Of course, with ballplayers I like, I'm used to having to say I like them "in spite of the hunting." And this too was the case with Brentz. But I was ready to become a fan of the guy. I almost blogged about it. Then he goes and shoots himself through the leg!

What is it with people always shooting themselves while cleaning their guns? These fucking gun people are always acting like they're so safe and they want to teach kids the "right way" to be a gun nut and all that, yet every time one of these extras from Deliverance cleans his piece, he shoots himself! I've never even touched a gun, yet even I can quickly come up with two key safety tips for gun-cleaning:

1. Don't have fucking bullets in the gun.
2. Don't fucking point it at yourself. Jesus.

And why are these guns always getting so goddamn dirty in the first place? Are they so shoddy that a little dust on the barrel is gonna make them wildly miss the target? How about taking the thing to a professional gun-cleaner? Some people don't even clean their own laundry. Yet gun owners have to buff those things to a high mirror shine! Even though their trucks are covered with mud, which they seem to wear like a badge! Maybe it's time to just let guns stay dirty. It seems like we'd all be better off.

In the Yanks/OD lottery sale, I got in and out in 2 minutes! Hope you all got what you wanted today. Now it's time to shovel.... 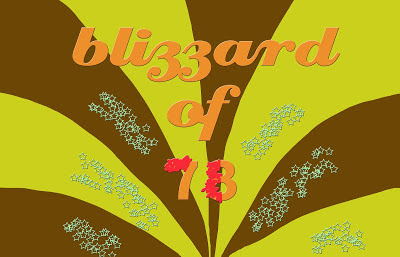 I put this Peter Good calendar container on the outside table at 1:00 this afternoon. It stands 8 inches tall: 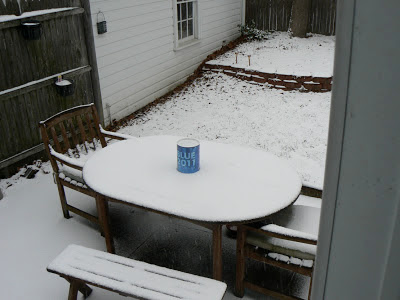 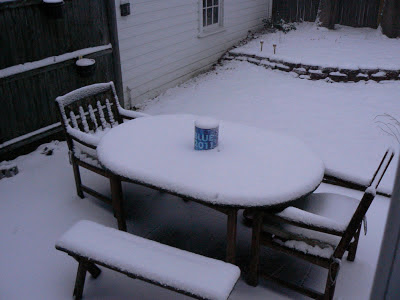 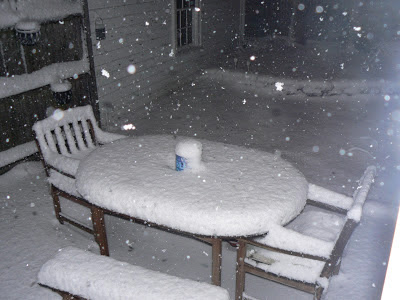 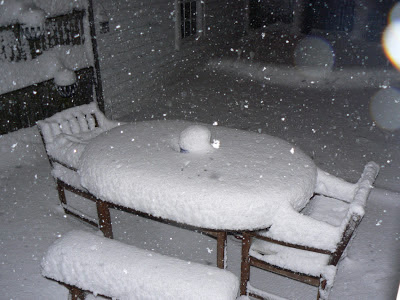 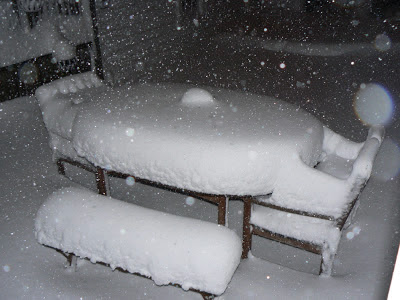 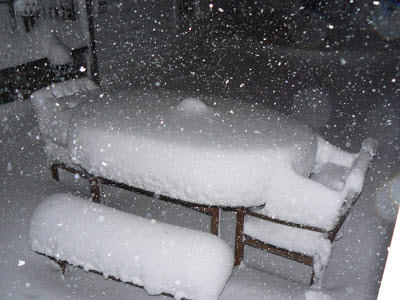 So we're up to a little more than a foot of snow, with a half a day left of snow to come, supposedly.

The crazy thing about this storm is that I can't see out the windows. The snow has stuck to all the screens. Not on one side of the house, on all sides. Here's the front door with its glass panels: And here's how bright it is outside that door at 2:00 a.m., with the stairs completely gone (and I shoveled them after about 6 inches): 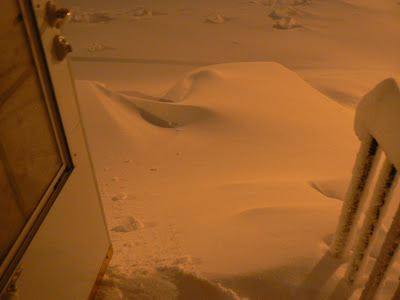 There's a road and a driveway under here somewhere. Those bumps are the tops of the previously plowed snow-piles, almost fully covered by what fell since. You can see the snow sticking to the side of the house, too: 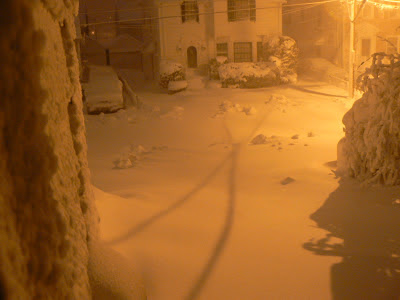 Relax In My Teepee

Providence is in the "sweet spot"--we could be getting two feet of snow. And I guess once you own a home you're supposed to root against natural disasters, but come on, isn't that what insurance is for?

So I'll be hunkered down for the next two days. Except when I'm sledding or shoveling. But not having to work Saturday morning means I can get my Yanks or Opening Day tickets since I won that lottery. As did my mom. I pretty much can only afford to eat right now, so I might not get anything. But I still get credit for the win at least.

P.S. Why are you down here reading this when you should be up there clicking that link and listening to the most underrated rap song in the history of the world?

Levangie Back On The Field!

Former bullpen catcher Dana Levangie will be replacing the retired Gary Tuck as bullpen coach. Sweet. This guy was, I assume, invaluable to the 2004 championship team. I was proud to acquire one of his old jerseys at the 2011 Yard Sale. Maybe I could get it signed by him in '13.

Also, happy birthday to my mom! And to Red Sox champion hurler Babe Ruth. My mom got Babe Ruth, my dad got Jim Rice. I got Don Aase. Ooh, I smell a blog post. For now I'll just look for the closest player to me in age...and it's Derek Lee, born two days before me. No major leaguer was born on the exact day I was. 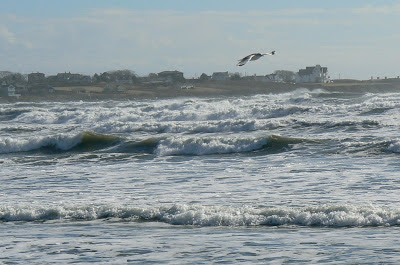 It's always awesome* when you find something in a picture you didn't know was there when you took it. Like this bird. This is from Newport a few days ago, when the sea was getting churned up like A-Rod at a factory where cheaters are punished via some sort of churning torture device.

*It's actually only sometimes awesome. Like the plastic cup in this pic I took of a guy flying one of those giant kites that you wield like a marionette in a gravity-free puppet show. 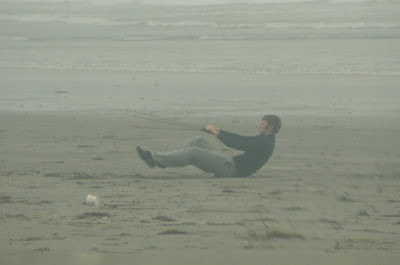 (This picture is funnier if you imagine he's actually being pulled along the sand by the kite.)

Hauls of Shame continues to uncover dirt on the scumbags embedded in the baseball memorabilia collecting world. I feel like this is all leading up to something major.

Hey, since yesterday counts as part of the football season since it was the day of "talking about the Super Bowl," and today is Truck Day, I guess it means it's always football or baseball season.

Some guy shot some pretty awful-but-awesome video of the truck rolling out a few minutes ago. (With that hilarious country song about Fenway blasting.) I kinda like that it's snowing on Truck Day. (At least here in Providence it is, and I think you could see some flakes in that video.) It reminds me of my initial "vision" of what turned out to be this blog. It was December 2003 and I pictured myself starting a documentary about being a Sox fan in Yankee land on New Year's Day 2004, with the snow behind me out the window, in my "Cowboy Up" shirt. Of course I never did that, but what I got instead was a 9-year documentation of all the incredible things that ended up happening since!

And Suddenly, It Begins Again

The TRUCK leaves from Boston today at noon!

What a super-ass game that was. As soon as the blackout happened I starting calling it the greatest ever, knowing that it was gonna lead to a crazy Niner comeback. I swear! And it almost happened. I was really pulling for the Kapernicus kid, I hadn't given up on the game yet (though the 98-yard kickoff return didn't have me as confident anymore), and I figured the big delay could only help. And I kept babbling about how if they do come back, it would be so crazy since of course the other team would be so pissed and have to blame the blackout, causing a huge firestorm. But SF fell just short. I still don't know why they didn't give Kapernicus a shot to run the ball--or at least throw one of those option plays and give it to Gore--when they have four shots to WIN THE SUPER BOWL from inside the 10. And then on the final kickoff--where are your laterals!? This is it, man, break out your Cal-Stanford play! What is this coach thinking? It's almost like he gathered the team, and said, "Okay, it's down to one play, here's what we're gonna do! Eh, on second thought, just don't even try, let's go home." Or maybe the NFL knew what the blackout firestorm would be like if they won, so they made them just end the game.

The good thing about SF losing, of course, is that the homophobe loses. And in the most ironic play in NFL history, the gay-hater goes and gets a penalty for putting his hands and body up against another man late in the 4th to potentially cost his team the Super Bowl. It stinks that the Murderific one gets another ring, but oh well, I didn't really care who wins. But I do admit I was super disappointed in the ending after having rooted for the Niners the whole way.

And that safety! Of course my dad and I did our usually prop bets, and the one every gambler always does is the "will there be a safety in the game?" bet. I only wish we'd put up more on it, but hey, we got our safety, even if it took 59 minutes. As soon as it got to 4th down, we were well ahead of the announcers in knowing there was a good chance the punter was gonna take the deuce. Awesome. That plus the SF + 14.5 spread we jumped on when they were down by 22 made it a pretty good night.

As for the contest, we had longtime reader (and now real-life friend!) Ryan winning quarter 1, then "gojohn" took halftime (looked like my mom was gonna win yet another contest just before the half but no), then another longtime reader Boston Fan in Wichita won the 3rd, and then, for the fourth, thanks to the safety, gojohn--with a different set of numbers--nailed it. I wasn't remembering who he was, so I checked his profile, and it turns out he's the writer of a new blog called Rhody Sox! Woohoo, a fellow Rhode Islander and blogger wins. (I had already had his blog linked in the sidebar as of a few weeks ago.) So nice job by him, he gets the top two prizes. Winners, send me your addresses! (I think Ryan and Wichita have both already won stuff so I should have theirs but they might wanna go ahead and re-send just in case....)

Thanks for playing, everybody, I hope that game was as fun for you as it was for me.