Funny moment in NYC today. Chan and I are walking to my car as I'm about to head home to Providence. Guy comes out of his building to take trash out, wearing Red Sox hat. Sees mine and says "go Sawwx." I give him the approval but he then asks "can you tell what my costume is?" Now remember, this is New York, where you could walk around for ten days straight without sleeping and not have one person say hi let alone stop you to have a conversation (this doesn't mean New Yorkers aren't nice, it means they're trying to live their lives). So we were kind of stunned, staring at this guy and his seemingly normal attire: a flannel shirt and jeans. Not even really sure of the question, I just gave him a quizzical look until he finally said, "Clooney in The Perfect Storm!"

Get it? The "perfect storm" is headed to the region? Talk about a super-current-if-forced Halloween costume. He then said, still in a perfect Boston accent which may or may not have been part of the "costume," that he had to get the Sox hat to complete the look. But it seemed like he meant that it was his and not a new one he bought, since it looked well-worn.

It's funny, the night before, walking back from Louis CK, a girl in a Red Sox hat AND shirt walked by us on the sidewalk, and just after she passed, Chan goes, "what, no secret handshake?" At which point I informed him of the eye contact/slight nods we gave each other that he as a Yankee fan couldn't detect....

But it led us into a conversation about how I did once run into someone I thought was a Sox fan, but was actually a Yankee fan who had lost a bet and was wearing Boston gear. (This was late-October 2004 so I can guess what the bet was.) And so with this girl out on the Friday before Halloween, we talked about how there's a chance it was just a "costume," and sure enough, the next day, we see a guy with a Sox hat who's only wearing it for Halloween. (Though I still maintain he was a fan, too, since he wasn't being a dick, like saying, "I hate wearing this but it's for a costume" or some shit.)

Saw Louis CK in NYC tonight. Awesome as you might expect. I'll have to talk more about this show later...

Also saw lots of twenty-somethings parading around in both regular and "sexy" Halloween costumes.

Two more runs tonight. Giants lead 2 games to none. A look at the board:

In 2008, I did a post about MLB teams who didn't have control of urls with their own names. Only eight teams were left without [theirnickname].com.

Here's an update on those eight:

1. Twins. "Twins.com" is still owned by D&D Miller, and is still "under construction."

2. Cardinals. "Cardinals.com" is now resting securely in the hands of the St. Louis Cardinals.

3. Rockies. "Rockies.com" is still owned by The Rockies Tourism Authority.

4. Athletics. "Athletics.com" is now in the possession of the Oakland A's. ("As.com" is some type of Spanish-language sports news site.)

7. Rays. "Rays.com" continues to be held onto by the stubborn folks at Seattle's "Ray's Boathouse." Stay strong, Ray.

8. Angels. The long standoff is over, as the Korean guy who was holding "angels.com" for many years must have finally caved to the Los Angeles Angels of Anaheim. Here's some old info about the case between the Angels and the guy.

So we're down to five. I can see D&D Miller, the Rockies Tourism folks, and maybe FMA caving at some point soon, as surely they're being offered hundreds of thousands of dollars. Ray's seems to be an established business and they probably are happy to have rays.com and don't want to give it up, though like most people, they could be had at the right price. But the Giants will never have giants.com, unless he NY Giants forget to renew one year or something.

So the high-number people are looking good. Then again, the series might only go 4 games. Or the scoring could slow down considerably. It's not like football or basketball, Suzyn....

Thanks to the baker's dozen of you who entered. Game 1 has started (and it's light out in SF, so weeeird)--here are the entries. Good luck!

Let's see...only one number was guessed by two or more people. So 46 would be a three-way tie. We'll talk about tie-breakers if/when they come into play. Looks like the average guess is around 40. Eight runs/game for 5 games or something like that. But if this series goes 5 and there are 5 runs/game, you'd all be too high and Dewey would take it from the low-spot. And my mom ends up as the high-woman, needing 59 or more to score a magnet. I'm gonna go ahead and say 60 for fun.

Note: My mom and MillersTime e-mailed their guesses to me, and should one of them win I will provide screenshots. Which could be easily manipulated. So you'll have to trust me. All other guesses are now published at the original post or one of the reminder posts to be seen for yourself. 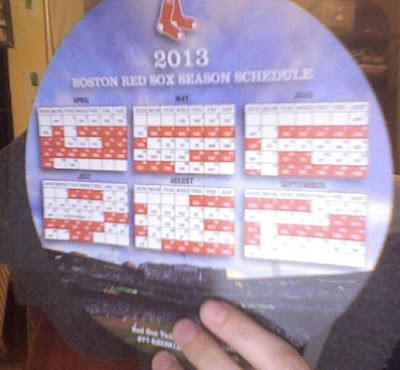 Here's the 2013 Red Sox magnet schedule (PSA graded gem mint 9.5) you might win! Just enter my World Series contest before 8:00 Wednesday night--tell me how many total runs you think will be scored in the series. (Your comment won't appear until Game 1 starts as I have been hiding them all so nobody can pull any Price is Right moves or purposely box someone in or snag the low or high spot at the last second. Closest to the pin wins.) 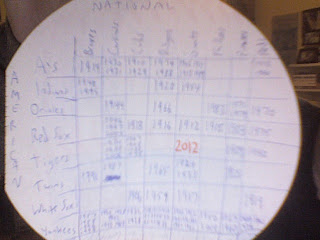 The Tigers and Giants have both been around for the entire "modern era," but the two have never met in the World Series. But they will this year. I made a little grid showing all the match-ups between the 8 original* American League teams and the 8 original* National League teams. As you can CLEARLY see, there are only 21 holes left. 2012 will be the 43rd different match-up between the originals. The following match-ups have yet to happen in more than a century of World Series play:

So it took until the 108th World Series, but we finally can say two-thirds of the match-ups have happened. It may take another century or longer to complete all 64, what with all the expansion teams. The Yanks are the only team to have met all 8 teams from the other league, while the Red Sox, Dodgers, and Giants have met 7 of 8.

Congrats to Scutaro, Lopez, and the Giants. That triple-bat-hit was fucking crazy. Even crazier was Buck and McCarver trying for the life of them for a half-hour to figure out what the hell happened.

*I mean "since 1901." Without going through a complete history lesson, some of the NL teams date back to 1876, and some of the AL franchises existed before the league started in 1901. Also, when I say "team," I mean "franchise." For example, the Twins never played the Giants in a World Series as the Twins, but they did as the Senators.

Tell me the total number of runs scored by both teams combined in the 2012 World Series in comments. Deadline: whenever the hell game one starts. It's fun because you don't know how many games it will go. I will reveal all the guesses when game one starts.

Prize: One of those big 2013 Red Sox schedule magnets. And maybe something else. Enter now.

Our old pitching coach John Farrell will return to Boston as manager for 2013.

And in case you missed it, in an obvious move, the Red Sox said they will freeze ticket prices for next year.