Red Sox win 4-3. Lester was great (but in 2012 style, left in the 8th with an injury) and Papi returned, hitting a two-run single on the first pitch he saw. Ciriaco's 2-run double won it for us. Bailey got his first save in red socks.

Meanwhile the Yanks went in clinging to a 2.5 game lead. Midway through their game and the Rays' game, things were looking good for us lifelong anti-Yankee fans. But the two games, which were paralleling each other time-wise as well as inning-wise, went sour. Both the Indians and Rays had the tying run on second with nobody out in the 9th, but neither could score it. Fucking Soriano, aka Sorry Asshole II: The Squeakuel, got out of his jam, probably with a Swisher-esque smirk of distanktion on his stupid face. So it easily could have been down to a 1.5 game lead, but instead it's back to 3.5. I am so pissed. The O's kept pace at 5 out.

I was looking at the standings and I see that every team that has scored more runs than its opponent for the year has a winning record, while every team with a negative run differential is below .500. Except for 3. One is the Mariners, who are up 5 runs but 4 games below .500--that's normal. But look at the Red Sox and Orioles. Boston has scored 28 more runs than its opponents, and sits 6 games below .500. And the O's? Fifty-two fewer runs scored than their opponents, and 11 games above .500. Incredible.

Anyway, all this is going on while crazy trade rumors fly. I guess we'll talk about that if and when it happens.

Well, at least this game didn't happen with us one game out with three to play or something.

We've seen some unbelievable games the last two years, but we may have yet another champion.

The umps did help the Angels though, with two blown calls. With the game tied in the 8th and one out, Aviles beat out a roller off the pitcher's glove to the second baseman. Ump called him out though. That made it 2 outs, 0 on. The next four guys would single, seemingly putting the game away at 11-9. But had the rally started a batter earlier, it could have been a much bigger inning, which it turns out we needed.

Then in the 9th, Aceves got the first out, then gave up a fly ball that hit the front edge of the top of the Green Monster and bounced up in the air, landing way back on the field. For some reason, this was called a home run. And there was no review. On a border home run in the 9th inning. Incredibly, not one person wearing a Red Sox uniform argued. I'm not sure how the umpires do it, but I would think that on any border call, if any of the four have any doubt, they'd review it whether there's an argument or not. But if it's as simple as "if anybody ever argues a border call, even if it's just to say 'hey--we'd like a review'," then holy shit how did we not do that? Didn't anybody think that it might not be a homer? Or shouldn't at least one person have said, "Know what, I'm gonna go argue if only to get the play reviewed just in case"? Of course, had the ump made the correct call, we wouldn't have to ask these questions.* (And note that Don had a classic gaffe call: "The Angels aren't arguing." No shit, Don!) That cut the lead to 1, and the Angels would end up scoring 2 more in the 9th to stay alive and take the lead. We then tied it but lost in extras.

A few random things: Do Don and Jerry follow baseball at all? Don noted incredulously that if the season ended today, the A's would be one of the wild card teams. Jerry followed with an "Isn't that something". Do they know that the A's have been within a game or so of a playoff spot for more than a month? They've been in the first or second wild card spot for about 20 days since mid-July. Yet Don acted like today is the day they finally reached playoff-level. This also came while describing the Rays-A's game, whose main story should have been how the Rays were about to close to 2.5 games of the Yankees' A.L. East lead, which had been 10 games last month.

There was a ball hit mere feet to the right of dead center field, and Don called it right field. Got a chuckle out of that one.

Great moment when Cody tied it in the bottom of the ninth with a dong. I called it over at the Joy of Sox board. I saw that they brought in that dude whose name sounds like Fieri, so I said "Drive-Ins, Diners, and Dongs," and immediately Ross tied it up. Too bad we couldn't get one more effing run.... It was redemption for Ross letting the ball go right by him on a bloop hit in the top of the 9th with two outs. It put the tying run at second, and he'd score on an incredibly close play at the plate that would have ended the game. Man, I just keep thinking of more and more insanity in this game....


*I feel like we've had this situation happen before, a ball hitting the red line or the ledge just on top of the line, and because of the dented and not-flat ledge, the ball actually bounced back toward the field (without hitting the vertical back part of the ledge. If that happens, it IS a dong, but that's nearly impossible. You'd have to hit it waaay up in the air, then have it hit a dent on the horizontal surface and go back in the direction it came from. This wasn't that--it hit right at the top front corner and bounced back toward the field. No dong. (Unless, again, it hit entirely on the horizontal surface but somehow bounced back instead of forward toward the seats.)

The Yanks' Lead Was In The Pool!

The Yankees have been in first place since June 11th. On June 25th, their lead was 3 games. Since then, that ballooned to as many as 10 games (July 18) and has now shrunk back to 3 games for the first time in almost 2 months. It's another game and a half to the second wild card, so that's how close they are to being out of the playoffs entirely, after having a double-digit lead in mid-July.

Terribly, when their game ended on ESPN, none of this was brought up. And it was our announcer, Dave O'Brien, on the call. Imagine what any announcer would be saying if the Red Sox lost a game to see a 10-game lead drop to 3 on national TV? Then they cut to the studio, and Schilling and some stiff just talk about the White Sox, and then the stiff says, "the other big story tonight is Adrian Beltre hitting three home runs...." Am I the only one who's watching the AL East lead shrinking?

We gotta get this done, Other Teams! As Red Sox fans, it may be all we've got left! Sox lose to Angels again, 7-3. 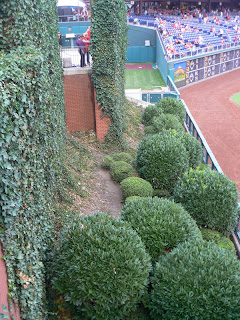 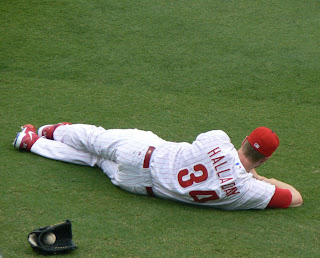 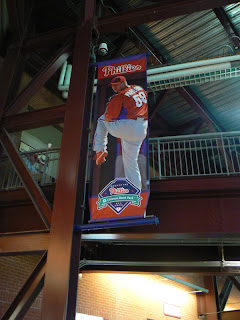 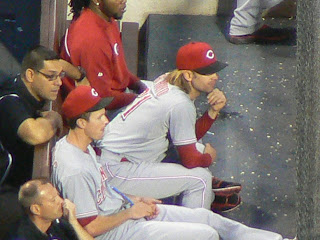 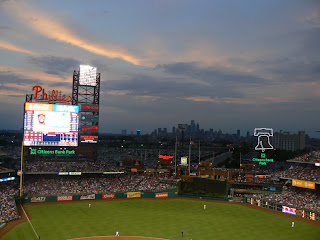 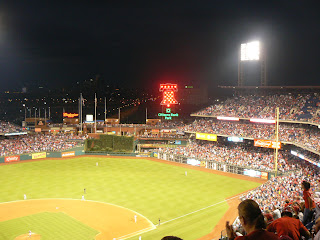 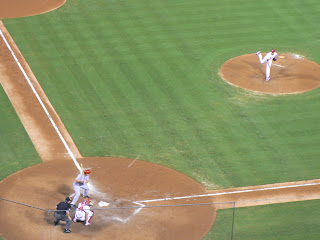 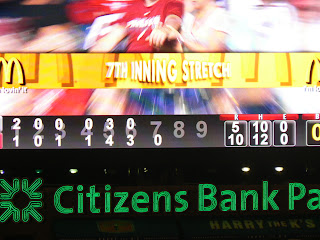 5-3 loss to Angels. Not much to say. Give to the Jimmy Fund here.

Edit: Okay I'll add this. Terrible job by NESN on the Ellsbury fly out late in the game as the tying run. The right fielder emerged from behind the score box to make the catch. So we all had this false hope that the ball was gonna find the gap. Then in the postgame, they use the play as their "save of the game," and whatta ya know, they put another graphic on the screen, this time covering both outfielders. Obviously I knew the outcome by then, but just kind of funny that they just don't seem to understand that their graphics block things. Important things. At important times.

Was at the Phillies game tonight, of all places. No Pap, no Arroyo. Pictures to come, maybe.

Pesky tribute at Fenway Tuesday night. I don't think I'll be able to make it but you should go.

If Ichiro commits harakiri for dishonoring his former team by tanking it, I hope Nick Swisher is standing right behind him.

Weird to be in NYC during Sox-Yanks and not go to a game. But that's how it went down. I'd like to report a new level of Jeter Efregiousness. There's a commercial for your tri-state Ford dealers, which shows scenes of cars with music playing. That's the whole ad. Execpt for a few shots of Jeter interspersed! For no apparent reason. Classic.