Good to get a win when everyone's watching. Gotta win the last two and get an MSU loss and we're in the B1G Championship Game. Which could be a rematch with these 1994 runners-up.

Maybe tomorrow will be the day I write about how super pissed I am we don't have Jon Papelbon anymore. We'll see.

I Stand Corrected Re: Ferg

For years I unfairly dismissed Craig Ferguson's show. Just assumed I wouldn't like it. Finally Chan convinced me to try it a few times. Turns out the guy is off the wall. Last night, for example, he had Larry King fill in as the voice of his robot side kick. I was on the floor. And the way he talks to guests--he just doesn't give a shit, it's great. Can't believe I've been missing out for so long. I made the mistake of thinking Conan was as "out there" as network TV allows. I was way, way, way off.

My mom said it best when she asked, Would Joe Paterno have called the police if it was his wife who got raped?

They just fired the old fart, and all these Penn State students started gathering and going nuts. A celebration? No, they're pissed! Have any of these idiot kids been following the story? I know Penn State is a huge school, so the rest of us can only hope these few thousand are the drunk morons who have no clue what the fuck is going on, and the rest of them are in their dorms quietly celebrating.

Funny thing is, ESPN has no clue these students are gathering. CNN has shown the whole thing, and the crowd is already moving somewhere else. And here's ESPN, wondering if student might gather.


Oh, and I forgot to mention this: Ticket prices at Fenway Park will be the same in 2012 as they were in 2011. I was pretty sure that's what would happen, nice to see they made the right move. And Xmas at Fenway will be Saturday, December 10th.

It made me a little nervous to see that a letter from the department of corrections came through our mail slot yesterday. Even though I'm pretty sure the way they send you to jail isn't by mailing you a letter that says "please report to jail," and even though I've done nothing wrong that I can think of, it still freaked me out just a bit. It was a slight relief that my name wasn't on the envelope, just my street name and number, scrawled in pen. That's how I knew this thing probably went out to the whole street. Then I thought, Whoa, what if this is some announcement about a sex offender moving into my neighborhood.... Sandusky?! But then I remembered that those guys are supposed to actually go to your door. At least in the movies. So I opened it up, and, wouldn't ya know it, a neighbor of ours has applied for a job as a prison guard. And this guy from corrections is required to do a background check. Which apparently means walking around the dude's neighborhood and sliding copies of this letter into their mail slots so they can give him feedback. Of course!

Part 2: The Guy. Yeah, so the guy in question doesn't actually live on my street anymore. He moved away years ago. That's all I know. Either he's moving back, or he's using his mom's address and therefore lying on the application for some reason. Should I call up and tell them this? I don't wanna snitch on the guy, but this Penn State thing just made snitching go from uncool to cool. "Oh yeah, that guy? He'd make a great prison guard. He'd check for holes behind Rita Heyworth posters twice a week minimum. But he did lie about his address." Eh, I don't wanna do that. And the letter didn't say we had to call. I'll wait a few days and see if he actually moves back in before I make my next move. Stay tuned.

The people who lived across the street from me growing up were huge Penn State fans. They had a little joke they'd tell. When their daughter was very small, they tried teaching her religion.

"Who was Jesus' mother," they asked.

"Very good. And who was Jesus' father?"

Not by a long shot, kid.

By the way, I know you've been waiting for me to say it: My Huskers are gonna kick Penn State's ass this Saturday on behalf of everyone! Thanks in advance for rooting for us, world.

Left: Shortly before Halloween
Center: During that October snow we had
Right: Tonight
Future: ?

And for those of you who never figured it out, it's the Misfits logo. That's what I was going for anyway. I feel like the average person probably thought it was some 6-year old's attempt at a scary face though. Also, you shoulda seen the flies on this pumpkin. Every day they'd just occupy the thing. At one point I brushed one off and it just fell to the stoop and sat there. It was alive, but it was just lazy as fuck, probably too full of pumpkin guts to even move.

Oh, and about that storm. For the record, Providence was spared. We had a slushy inch of snow that melted quickly. Meanwhile all we were hearing was horror stories from NYC, CT, Mass., and everywhere else. Wind, snow measured in feet, power out for days, Halloween postponed... the whole thing just wrapped around Rhode Island, though. Didn't even have to shovel, the sun did all the work. 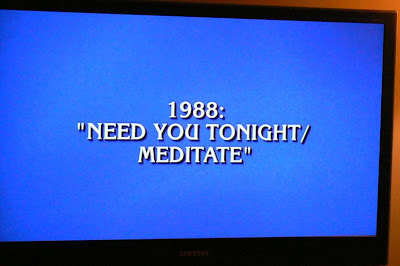 Meditate? Unacceptable, Jeopardy! (They also recently said "Mitch and Mikey" instead of Mickey.)

Something I figured out this weekend: the college football announcer in Back to the Future Part II is the same voice as the Yankees announcer on Seinfeld.