Thought I'd share with you the letter Kim and I sent out with our Xmas cards this year. Enjoy!

Whew, what a year! We thought we’d get you up to speed with a tidy recap. After all, sharing is what the holidays are all about!

In January, after a rough bout with scurvy, both of us were exhausted, but ready to start the new year right. An extensive craigslist search led us to “Todd” and “Gina,” with whom we soon joined in holy matrimony in a four-way wedding. Todd’s unnatural love of metal detecting in the cold and Gina’s blood pudding fetish led to a quick and inevitable annulment, but all of us remain close. The valuable lessons learned outweigh the often horrifying experience.

February saw a financial downturn in the household, as Jere’s idea of investing all of our money in scratch-off lottery tickets proved to be a mistake. The plan led to an abundance of “free tickets,” but said tickets only produced more losers, leaving us nearly broke.

Things began looking up in March, though, as the $25 left to our name provided us with a miracle, when we exchanged it for twin armadillos, Ozzy and Sharon. The joy we all shared was immeasurable. They cooked dinner, accompanied us to free rock concerts, and even came pretty darn close to beating us at team Scattergories. Alas, any scraps of food we could find went to ourselves (and the cats), so the armadillos starved to death. Dem’s the breaks! Needless to say, March went out like an emaciated armadillo.

April saw rebirth when we found Jesus. Separately. Kim found him in a comedy club—his Sarah Palin impersonation was dead on. Jere found his Jesus ice skating (walking on water, if you will) at Kennedy Plaza in downtown Providence. Upon bringing our Jesi home, we realized we had had two impostors on our hands. We were left with no choice but to force the two men into neighborhood “Jesus fights.” Drawing huge crowds, at five dollars a head (tax-free! Shhhh), we suddenly found ourselves financially sound again. 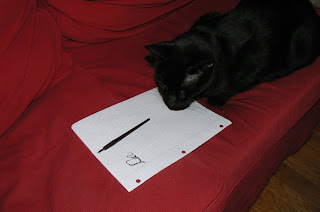 May brought success in the feline department. Amazing Larry’s straight A’s lead him to a MENSA membership. And after years of getting up at 4:30 a.m. daily to drive Danzig to calligraphy lessons on the Cape, he was rewarded with a full scholarship to Brown. We couldn’t be more proud!

June brought doom and gloom, however. After losing Ozzy and Sharon, we thought it would be nice to have some young ones help Kim out in the soap studio. Unaware of Rhode Island’s strict (in our opinion!) child labor laws, we had them working three shifts, round the clock. Before we knew it we were behind bars.

In the spirit of independence, on July 4th, we broke out. Maximum security, my ass! Which, by the way, still hurts. As a reward to ourselves, we celebrated our newfound freedom by doing some traveling. Through time! Jere figured that enough old baseball cards stuck together using Kim’s body scrubs should create a sufficient a rip in the time-soap continuum so as to bring people thirty to forty years into the past. After a 20-minute trip, we found ourselves in our own home—in 1978! We had a hell of a weekend enjoying the pot and the wood paneling, only to discover we had traveled not through time, but simply through the woods, to the home of a couple of aging hippies some three blocks away.

In August, we went to a Tea Party rally at the capitol. Are those people nuts or what??

In September, Jere (almost) sobered up and decided to give school a ninth chance. Influenced by the Jesus fights (still going strong—Saturdays, 7-9 p.m., Roger Williams Park, seating limited), he declared rooster pugilism management as his major at Providence College. He’s currently running six cock fights a month, with a diverse range of 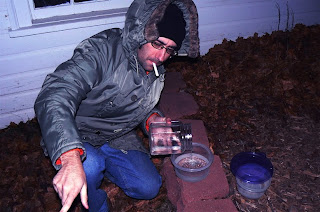 clientele, both human and avian. Kim, in an attempt to embrace the values of our nation’s past, embarked on a new career in 19th-century mid-wifery. (Screw epidurals!) Things were looking up on all fronts.

But everything came to a grinding halt in October, when we found our dining room chairs arranged in a pyramid—on the ceiling! An exorcism was in order, and let me tell you, it’s not like the movies at all. It’s more graphic and more disturbing. But that old gal got the job done swiftly, with only a few injuries to passing trick-or-treaters. Turns out the house was built on an old barracks of the Kiss Army, and the ghost of Eric Carr was apparently pissed.

In November we gave thanks to things being back to “normal.” Jere was able to start a moonshine/Tupperware business and Kim continues Stella Marie Soap with help (when available) from underage, underpaid workers.

That brings us to today. Every day of December, we gather around the fireplace, passing the crack pipe from Kim to Jere to Danzig to Larry, reflecting on the events of 2010. Life is short, people. Enjoy the time you have with your friends and loved ones. Don’t forget to booby trap the chimney. 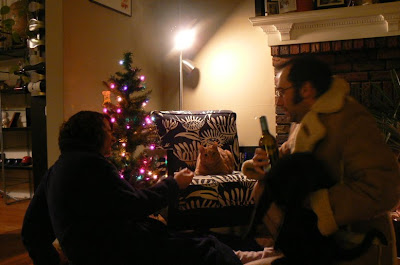 With all the players Boston fans have showered their love upon, with all the guys who adopted Boston as a second home and their fans as a second family....we get this piece of shit article, that tells everyone that Boston hates outsiders and is racist*, its players hate the fans, and on and on.

So, "journalist" Abby Goodnough, I'm scoring your article an error. Hopefully this E makes you GoodEnough!


*yes, Boston is racist, as is every other city, town, and Internet in the world

The only excuse is if they had reams of stationery with the old logo on it and they didn't want it go to waste. But they should have thought of that when they came up with a new logo and had a press conference about it. In 2008.

I pulled up to the pump at the gas station. Got out, started to go through the routine, complete with mandatory scoffing at the price, as if this will catch the owner's eye and lead him to find it in his heart to take a loss and cut his prices in half through the holidays. The minivan at the pump in front of me hadn't moved by the time I began to feed that delicious oil to my Hyundai. Finally I see its gas tank cover pop. I didn't know why it had taken that person that long to get to that point, but no one else was waiting for that pump, so whatever. The driver gets out. He's in his twenties, scruffy, winter hat, sneakers. Pretty much your average American eighteen-ta-thirtyfiver.

Except for the bathrobe he had on over his clothes.

I put my very best "I don't see anything out of the ordinary in my general vicinity" look on my face, finished pumping my gas, and drove away. I guess the question is, Did I disappoint him? What kind of reaction was he hoping for? Was he in shock that I didn't make some type of face, or give some indication that I recognized his abnormal wardrobe? Or did he think I was great for not outwardly judging him? You can't wear a bathrobe over your clothes and not expect people to either react or consciously avoid reacting, right? At least not when you're outside the Ironic College District, which we were.

Or am I missing something? Are "outdoor bathrobes" on sale right next to the Whalers T-shirts?

Do You Have IFC?

I do. They have or are getting lots of good TV shows. The new David Cross one, the one with Carrie Brownstein of Sleater-Kinney and Fred Armisen, that Onion show, Freaks & Geeks, Mr. Show, Arrested Development, Monty Python, Larry Sanders....

But I hate that they have commercials during their movies now. And then have the nerve to come up with an "always on" slogan!

The scene is the bedroom. At Kim's request, I've selected track 2 on the relaxation cd she sometimes uses to help her fall asleep. As she lies peacefully in bed, I say good-night and start to leave the room, as I am nowhere near ready for bed. But first...


Jere: Oh, there's something I have to do real quick.

Jere: One of the cats left a turd under my desk and I have to clean it up.

Kim: You may need to restart track 2.

This page has some Fenway improvement videos. Pretty crazy to see some of that signage get taken away in preparation for the new scoreboards. Especially John Hancock! It's not often you take your John Hancock off of something. Or something.

Also weird to see all the seats out and the concrete being ripped up, etc.

Did some unfURLing and found out that the bulk of Red Sox games (aka the summer games) will go on sale on Saturday, January 29th, 2011, at 10 a.m. Looks like Pats Day will be included in the sale.

As I suspected, the Cubs games will not be part of the general sale. So those plus the Yanks games (which includes Opening Day), will be a separate lottery.

Of course, none of this info has been announced so watch me for the changes and try to keep up.

Yes I know I use that reference a lot.

Have you seen the second Ricky Gervais special yet? The bits about gay marriage and Noah's Ark are floor-rollingly funny.

Oh, and remember I asked you if you remembered Waterfuls? You clearly didn't, so I'll remind you. They were these little plastic stand-up tanks of water, with little balls inside. There was a big white button on the front. You pressed it, and it would shoot air into the water, making the balls move around. The "game" would be tic tac toe or whatever--you'd have to make the balls land in certain places. It was like upright, underwater pinball. It seems like every kid had at least one. Shortly after I thought of them and asked you that question, we were eating dinner in Northampton, and a girl at another table was holding a Waterfuls! She was showing it to her parents. I'm guessing Faces or your local "mildly funny stuff" store is now selling them in a retro way. "You have to use your hands? That's like a baby's toy..."