Just watched the documentary Harvard Beats Yale 29-29. Very nice job. I guess I never realized just how amazing the comeback was. My only complaint is that they didn't use Ken Coleman's call of the game.

I just got back from the Baseball Hall of Fame. Pictures of all the Rice-tasticness coming soon. In the meantime, I wanted to start of the new Kwiz season with a video Kwiz--but I felt weird about talking all loud in the gallery. So I just shot the video, figuring I'd type out the question. So here it is, and below it, the question. Note: You don't actually need to view the video, it's just for reference, I guess.

At the bottom of Jim Rice's plaque is a little notation that says the copyright date. In what year did the Hall of Fame first start regularly putting this on the plaques? Put your answer in comments. One guess at a time. I wanna go to bed, so I'll get into the full rules of Kwiz Season and set up the other page later.....

Here are two pics and two videos from annual "Iron Pour," another fire-related Providence event. All shot by me, 10/30/09: 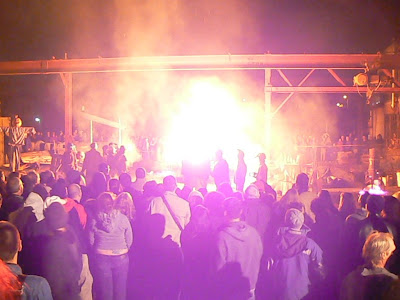 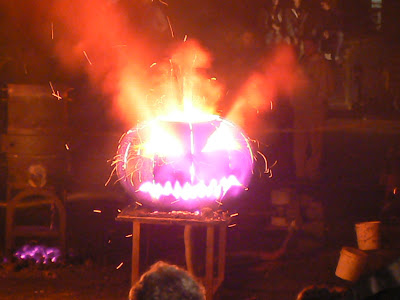 "I'll Take The Next One"

Are you shitting me?

Get Bret Weir I Said

The Pleaseeasaur era is over, but the JP Incorporated one has just begun! Saw JP tonight at Jerky's--as usual he was opening for the legendary Neil Hamburger, but he's joining Devo's tour in a few days. The new stuff is all TV theme songs (to non-existent shows) and commercials, so he does include some of the Pleaseeasaur material that fits in. And he doesn't have a helper or costume changes anymore, he just acts as the host of this mythical TV network, and sings while videos play on the screen next to him.

So go see JP Inc. Hilarity will ensue. Terrible job by my fellow Providents for not showing up in full or even medium force for this show. I've never not seen these guys in a packed house until tonight!

My favorite Hamburger joke of the night: Who has the most alternative rock Grammy statuettes? The pawn shop across the street from Anthony Kiedis' drug dealer's house.