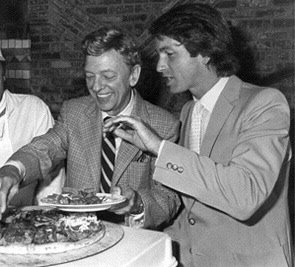 Thanks to AJM for this link. Hilarious.

On his third pitch to Damon, Johnson grazed the center fielder's left forearm, though Damon was fine.

"Guys were teasing him, saying he should have done that last year," Damon said. "He did it plenty of times last year. I was never comfortable."

"They're my teammates, so they're safe," Johnson said. "Some of them, anyway."

Even though these lines were said in jest, and everyone shrugged it off, the whole article just reeked of an "us vs. them" situation. It also said that Mattingly made Johnny hit against Randy over Giambi because Mattingly's known Giambi longer. Between these dudes and Sheffield's ego and George's wacky antics and A-Rod's quest to become a "true Dunbar," that team is once again lacking chemistry. Now that George has officially predicted a 27th championship for Mr. Dunbar, he's going to be that much more irrational when losing streaks happen. Everybody just keep talkin'. George, stay directly involved with the team. Go right in the locker room and tell them they must win this year or else. And everything will fall into (second) place.

For NY-area people, just an update on spring training games on TV:

Gedman & The Broseph On The Silver Screen

Check out this upcoming movie: Game 6. It's about a Red Sox fan and playwright living in New York who does something something something on the night of game six of the '86 World Series. As you can see, I'm not fully grasping what this movie is actually about yet. But I do know that Mr. Mom himself, Michael Keaton, plays the lead role. Former SCTV cast member Catherine O'Hara and former SNL cast member Robert Downey, Jr. are also in it. I can't even tell if this is just another "cash in on the whole Red Sox thing" deal, but it's a legit film with legit actors. Although that doesn't always make it work.

I've noticed a shot of Rich Gedman in the trailer, swinging and missing at a pitch from Roger McDowell. The shot is used after the point in the trailer when Keaton's character celebrates Henderson's homer in the top of the tenth in game six. I don't know why the Geddy swing-and-miss is used as the "things then started to go downhill" shot, after which we see Keaton get a pained look on his face. Gedman only faced McDowell twice in the series, and he didn't strike out, so Keaton's reacting to what I've determined to be a swing and a miss by Gedman, on an at bat in the seventh inning of game six in which he ended up singling to left, with Jim Rice getting thrown out at home. (Remember Jim chugging around third with that ridiculously wide turn and those short steps, and then being tagged out by Gary "Brady-perm" Carter?) Oh well, no baseball movie has ever been completely "correct." They're always going to make some mistake that I only I notice. Especially if they go throwin' Gedman up on that screen--I'm gonna see it if there's an inaccuracy. The only reason I can think of that they used this shot is because the pitch Rich misses is eerily similar to the one Stanley later threw past him while he was catching, allowing the tying run to score, just before the Buckner *bad hop* grounder. Maybe there was some miscommunication in the editing room or something. They just knew there was a low and inside pitch that got by Gedman that made Sox fans cringe, but used the wrong footage.

Another interesting thing is how the main character's family is named Rogan. Just like BSM. Keaton plays "Nicky Rogan," but some other dude plays "Michael Rogan." That's right, it's a story about a Red Sox fan living in NYC who has a brother named Mike Rogan. Hey...BSM did take some time off to "work on a screenplay" a while ago. Hmmm. Well, even if it's not his, something tells me Hollywood is being influenced by Red Sox blogs. In fact, guess how I heard of this movie? The company itself emailed me telling me I can go to the "press screening." Am I press? Oh well, I'm gonna go, and I'm also going to inquire about something else from that e-mail: the chance to interview cast and crew. I want Catherine O'Hara. The whole interview would be "Tell me about those Christopher Guest mockumentaries. Then we'll move onto your SCTV years."

Oh, and the band Yo La Tengo does the music. From wikipedia: "Indie rock band Yo La Tengo are huge Mets fans, their name even coming from a Mets anecdote..." That's cool, but I'd have preferred a Red Sox fan band. Or maybe both. This could have been a Jon Richman vehicle!

Brian Regan will be on Letterman tonight. If you're up, give him a shot. He may make you laugh greater than or equal to one time.

While writing the above paragraph, I saw an ad for the Center Stage episode with Johnny Damon, premiering in a few weeks. (This is Michael Kay's hour-long bullshit interview television show.) If I watch that, I just may vomit the type of vomit that vomits other vomit out of itself.

Curt Gowdy's was a voice I knew well, from the call of Ted Williams homering in his last at bat, to the Super Bowl III highlight film, to his fine work as the lead announcer in that key Angels-Mariners game from the first Naked Gun movie.

I got to hear both Boston and New York sports radio today. The Boston station made some quick mentions of Curt while I was listening, but the New York one, specifically Mike & the Mad Dog, was all over it. They had Billy Packer, Dick Enberg, and Tony Kubek on, as well as Suzyn Waldman, who told of her memories growing up with Gowdy doing the Red Sox on radio. Mad Dog "didn't realize" Curt meant so much to Boston sports until Suzyn clued him in. I still just can't even fathom how Suzyn can sit there and talk about her fond memories of listening to the Red Sox as a child with her father, and at the same time allow herself to be one of the voices of Dunbar, as well as a Steinbrenner cronie. Terrible job, Suzyn.

Even though Gowdy stoped announcing Red Sox games in 1965, his replacement was Ken Coleman, who I listened to as a kid. (And who was partnered with Joe Castiglione, the current voice of the Red Sox.) So that's my connection to him.

A story I heard first on EEI, and then from Waldman on FAN, was that Ted Williams didn't tell anyone that the game in which he hit his last at bat-homer would be his last, except for Gowdy and the clubhouse manager. When Ted hit the shot, Gowdy said "..in his last at bat in a Red Sox uniform..." and everyone else said "Huh?" because there was another series after that, but Ted was done. And because Curt was close to Ted, he was able to break the news to everyone during that memorable call.

A great story, but, keep in mind, when Dick Radatz died, all of a sudden it was "Radatz faced Mickey mantle one thousand times, and struck him out every time, while pitching with his opposite hand. Blindfolded. And Mickey was swinging two bats at once."

Another thing I kept hearing, on both stations, was how horrible the Red Sox were during the Gowdy era. Suzyn eventually cleared that up, after Mad Dog said he'd guess that during those 15 years, the Red Sox had two winning seasons. She pointed out that it wasn't just Ted Williams on the team, and that they weren't that bad the entire time. Sure enough, Doggy came back and admitted he was wrong, and that they actually had a winning season "more often than not" over the stretch. But it was interesting to hear different things come up pertaining to Gowdy, and how people just latch on to them and accept them as truths.

Check out this frozen fountain, from wherever I was this weekend: 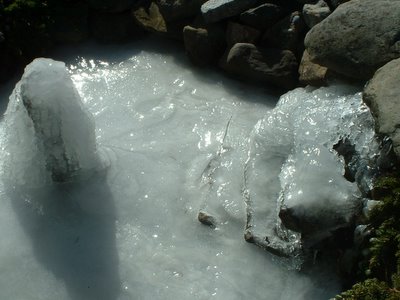 I've heard a lot of people say a lot of things about Pulp Fiction. It starts with the ubiquitous specualtion as to what's in the briefcase and goes all the way to the burnt out letters on the Killian's Red sign. But no one ever mentions all the name-ryhming. I can think of four examples off the top of my head:

Bartender: "My name's Paul, and this shit's between y'all."

Jules, in the apartment: "My name's Pitt. And you ain't talkin' your way out of this shit."

Buddy Holly-waiter, at Jack Rabbit Slim's: "How about you, Peggy Sue?"

The Wolf, at Jimmy's house: "How about you, Lash LaRue? Can you keep your spurs from jingling and jangling?"

What's the deal with this? Maybe Tarantino just did it because he likes to. (After all, he did end up doing a movie called Kill Bill.) Still, I want answers. Oh, wait, I forgot "Zed's dead." And I might even consider "Our man in Amsterdam." Oh, and doesn't Butch say "Bye bye, sugar pie," or something, to Fabian? And there's the "Honey Bunny" character as well. There's also an "eeny, meeny, miny, mo" in the movie. Maybe it's because the whole thing is one big, twisted nursery rhyme.

Have a good Presidents' Day, everybody. Think of Coolidge vs. Wilson. And happy Two/20/06 for those of you who know what that means.

Just seeing the first few pictures from Fort Myers has me feeling like the Red Sox will be an unstoppable force this season.

I also think that the Mets, if for no other reason than "they're due," might have one of those seasons where they're 19-7 after April.