The Thing Is Back

What a week. First Theo comes back. Now this thing is back. Die-hard readers (reader?) of this blog remember how I said how I felt like the coolest person on Earth whenever me and Chan would casually walk up to this thing and start pushing it from either side until it started spinning on its base, to the delight of tourists. Tonight, we were down in that area, and Chan yelled, "It's back!" So we went right up to it, and did our little spinning trick. Only this time, some random dude grabbed a corner and pushed along with us. It was great.

It was also a very Red Sox hatty day in the city. It culminated with the sighting of an ultra-rare Pawtucket hat.

Big weekend for mom's book. Both the New York Times and the Boston New York Times, I mean, the Globe, will have a review on Sunday. Page 19 of the Times Book Review. Boston people, you'll have to leaf through to find it. That name again is Mr. Plow. (Where "Mr. Plow" equals "Girls of Tender Age: A Memoir")

He's back! Praise Gedman!
And it's in press release form, so it must be true.

Unrelated: Bill Simmons recently wrote "...while CBS played "Jane Says" by Jane's Addiction (welcome to the '90s, CBS!)" and then proceeded to brag about his musical knowledge. Please note that "Jane Says" first appeared in live form on Jane's Addiction's self-titled debut album, released in 1987. The studio version was first heard on their Nothing's Shocking album, from 1988.

The Domicile That Dunbar Developed 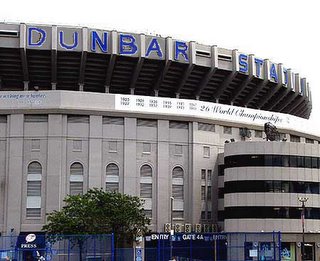 On New Year's Eve, after having seen enough Twilight Zones, I went to bed around 1 AM. While I was sound asleep, the phone rang. I could hear someone leaving a message, but ignored it. A half-hour later, it rang again. I picked it, and some girl was asking for Anthony. I told her she had the wrong number. She said, "Okay, bye." Not, mind you, "Oh my god, I'm so sorry for waking you up twice in the middle of the night."

Anyway, I woke up the next morning to hear the above message. It's funny how she loves this dude so much but can't get his number right in two tries. She was also so drunk she said 11:30 as the time at first, when it was obviously after midnight on New Year's Eve, meaning she'd not only gotten the phone number wrong, but the year as well.

I like how she classes the whole thing up with the "one love" line at the end.

Note: If you don't like the F word or if your kids are in the room, don't play the message.

Some Pun That Uses Cell/Sell

Lately, when a person is on their cell phone, and they get in my way on the sidewalk due to the fact that they're completely oblivious to the world around them, as I pass them, I'll say "pay attention" right into their ear.

But the worst part about these people is not their rudeness or their selfishness, but the fact that when I turn around to give them a glare after I've told them to pay attention, they're still oblivious, and I don't even get the satisfaction of them acknowledging the fact that I stood up to their ridiculous behavior.

"I don't know about you, I ain't going to study war anymore."