Did You See Him? 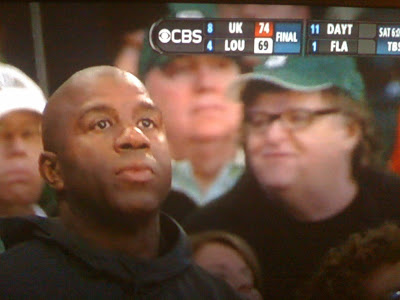 I guess his seat was slightly worse than Magic's.

May 28th will be the tribute to the 2004 team. I hope we get to see that post-season's hero, Curtis Leskanic, this time. News about other April/May stuff here.

In other news, it's three days until opening day, and the Orioles have still not released one ticket to non-season-ticket-holders. Unfair to both home and away fans. You know you've got tickets sitting around, O's...whatcha gonna do? I feel like Bud Sox talking on the phone to the Gordon Gekk-O's, finally having them over a barrel. It's two minutes to close, Gordon, what do you want to do? Decide...

The Thing About The Kids

Am I reading too much into the fact that the Jimmy Fund made Will Middlebrooks their 2014 captain, only to later add David Ross as a co-captain? I don't wanna lose Middlebrooks. Please save Middlebrooks. Don't trade Middlebrooooookssss.....!!!!

I see on redsox.com they've "fixed" the batting average leaders chart. Instead of only showing Jackie Bradley as the "top 3," despite that he was never in the top three, they now show three players. But those three are actually #19, #23, and #26 in batting average. How hard would it be to just make this not be horribly inaccurate?

I guess these old baseball postcards are worth quite a bit. But it's funny how they spelled Yaz' name. It was almost like they told the person who scribbles the names,* "Okay this is a tough one, I'm gonna sound it out for you so you can't fuck it up: Yas-tra-zemski." And of course they ended up with "Yastrazemski."


*Odd how some of the "autographs" are just the names written in cursive, which we used to call script, and which apparently isn't taught in schools anymore.

Glad Papi got his extension. My theory was they they'd extend him and put a C on his chest, but I guess not.

My Fave Weekend Of The Sports Calendar 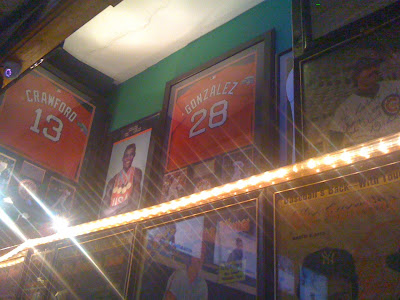 It's fitting that the special section of Bobby V's dedicated to his time as Red Sox manager includes the jerseys of Crawford and Gonzalez. That's where I was Friday night for the annual Smarch Smadness get-together. That V has some cool memorabilia, I tell ya. You'd need a lifetime in there to see it all.

Once again I used my "simply look at the point spread" method of picking the first round, and once again I dominated. Got all three 5-12 games right, and three had the 12 winning. Also had the Harvard upset. The way we set it up was for me and Chan to split a bracket, I pick the first round and trust him with the rest. After I passed the baton, Chan has come through, nailing the toppling of both Kansas and Wichita State today. We've got six of our final eight alive and all of our final four. So we're in good shape. Really fun tournament so far. (Billy Mumphrey's downfall was picking Nebraska to go three rounds--I had to do it. (Though Chan noted I could have just picked them to win one round.) Hopefully we can overcome those lost points.) 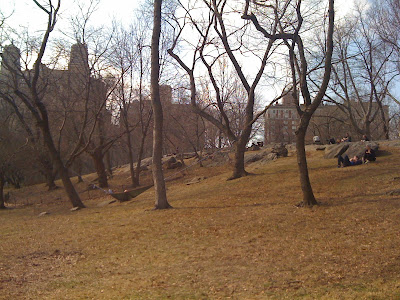 After the Stamford meet-up, I went on to NYC with Chan and stayed for the weekend. As you can see, they were breaking the hammocks out in Central Park, where we played our usual Aerobie in the 60-degree warmth on Saturday. At one point a guy walked by and said "nice hat." Later, in a different part of the park, he came around again, this time with his girlfriend. By then we were Sox Pals, so the three of us gave full-on greetings. I love it--a random person was essentially forced to say an audible Hi to me in New York City simply because the guy she was with had made a brief Sox-nection a half-hour earlier. She seemed happy to do it, though; I think she was one of us. 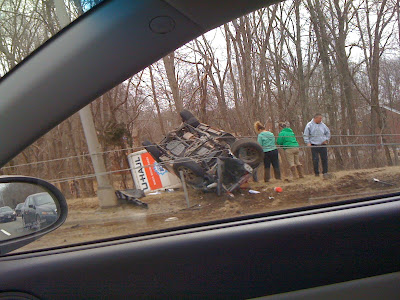 Made it all the way back to Providence this morning in 2:30, i.e. "the time it would always take if traffic jams didn't exist." I only had to slow down for a minute as I passed this flipped car with half-flipped trailer on 95. The cops hadn't even arrived yet. These poor mofos seemed very calm though--I get the feeling nobody was hurt. Which is amazing when you look at the above picture--check out what happened to that tire. It's not even, like, in the tire...area. Bonus: Look just to the right of the mirror, way in the background. Is that a witch?