The season 3 premiere of Comedians in Cars Getting Coffee contains three Red Sox hats and a Steven Wright mention.

Update: Video no longer works. I did think it was odd that the show's official site said season 3 started in January, yet here was episode 1 on YouTube.... Glad I got a sneak peek, hope you did too.

It's Not Every Day I See A Whale

"Beached whale": It doesn't always mean a fat person. Sometimes it means an actual beached whale. Which is what appeared in Newport the other day. Today I got a chance to see it. It's on the rocks forty feet down from the Cliff Walk, so this is as close as you can get to it. In fact, they're going to just let the poor guy decompose right there since they can't really access it. 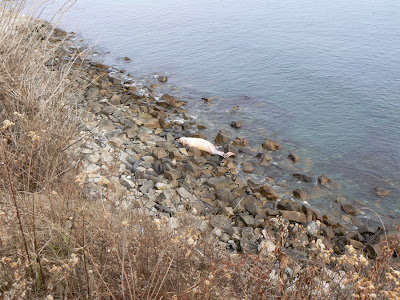 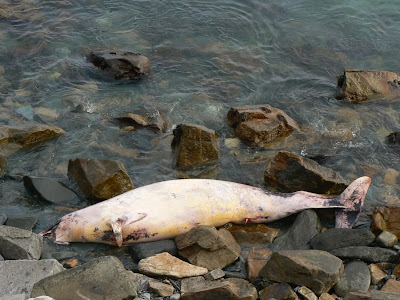 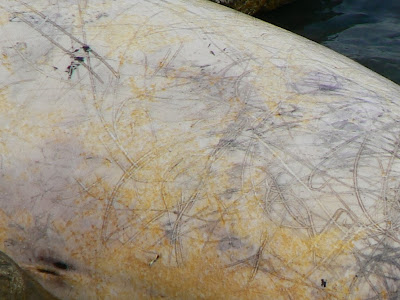 I don't remember what kind of whale this is, but it's one of the ones with a beak.

As I approached the scene of Christmas Eve's accident on the Newport Bridge today, I noticed the car in front of me in the right lane had her left wheels in the left lane. In other words, if you tried to pass her, you'd have the same head-on collision that had taken place two days earlier. I finally did pass her when I was sure no one was coming the other way, and as I peered over, there that piece of white trash was, head down, deep in text. These people really make me want to rethink my position on the death penalty.

In Japanese baseball player news, I'm like most American fans in that I don't know much about this Tanaka guy besides his age and his undefeated record last year. I know way more about Sara Tanaka, who did a fine job playing Margaret Yang in Rushmore. Which is funny because if the Yanks get this pitcher, they'll probably replace Brian McCann's face with his on their own Mt. Rushmore. So, Jeter, Jeter, Jeter, Tanaka.

Your Kids Are On That Bridge, Too

You know that big antique store in Newport? The armory one? I went there today around 2:00 and did a full walk-through looking for some LMGs. I found a really cool framed movie poster from 1972 for $45, and I had $40 on me. So I suggested $35 only to be told they can't come down on these dealers' prices unless the thing costs more than $200. So I told the man I was $5 short and gave that "can't you do something?" look. He then said, Wait a minute, this never happens, but the dealer for this section is here right now. Next thing I knew I was being introduced to the dealer, and he happily accepted my forty bucks. I tossed around the obligatory yet facetious "Christmas Miracle" phrase, made my purchase, and walked out to my car hearing firetrucks in the distance.

Back in October, the brother of Kenny Prior wrote a long piece about how Kenny was killed along with his driver on the Newport (Pell) Bridge in 2011. It appeared as a pamphlet inside the local papers. The text of it can be seen here. The guy and his family called for a median to be installed. And they're exactly right. Vehicles fly past one another going 70 mph. If the selfish texting teen hadn't crossed over three lanes, slamming into another car head-on, two people would be alive today instead of dead. But at least with a median the dumb fuck might have noticed he was drifting once his car reached the middle of the bridge.

I headed for the arches and as I got to the ramp to the bridge, I noticed cars driving down a grassy slope from the ramp back to the main road. Not just one yahoo who decided last-minute against going to Jamestown and points north/west, but multiple cars. Could traffic be that bad that the whole bridge is stopped and people are turning back? Then I saw cops and a line of stopped cars. Then I realized the entrance ramp to the Newport Bridge was blocked off. I was able to keep right on driving, heading for the alternate folksy route from Newport to Providence. A tow-truck was headed onto the bridge in my rearview.

The family's crusade--which included a lawsuit and a message on a truck that I've spotted numerous times around Newport and Jamestown--led to headlines a few days ago about a study the state will be doing to see how to go about putting in a median, if they do it at all. Slowly but surely, things are happening. But how many people will die while wait?

Being on the east side of Narragansett Bay, I stopped at my wife's soap shop, and fired up the Twitter. "Head-on collision." Initial reports said it was fatal. Now they're saying no details are available, other than two people at separate hospitals. I saw the pictures of the crash. Two cars destroyed. The lives of the people inside maybe also destroyed. So the "Christmas Miracle" at my house wasn't the deal on the poster. It was the extra time it took to obtain the poster which led to me not being right there when giant metal objects, maybe mine one of them, came crashing together at a high speed. Of course, I could have gone home after surviving this crash and had all my limbs cut off in an even worse one. And if there really are "miracles," why would the entity in charge be screwing around with us, letting one person live and another die. "Blasphemous rumors" to think about.... Here's hoping your Christmas Coincidences are the kind that make you live, not die.

As for the median, whether today's victims live or die, this was the moment where the mayor now realizes there's no choice but to pay Quint to catch the shark. To whoever's in charge here in Rhode Island: You're the mayor of Crash City. These people think you want the median-free bridge open! ... Sign it.

Winning The World Series Through The Eyes Of Victorino

It's unfortunate that we have to go through this every once in a while, but The Plaje is back! A few days ago someone discovered that a writer for the site "Red Sox Life" plagiarized the comments of some redditors. She decided that instead of writing her own material, she'd go and look at what other people said, and reprint it almost word for word and pass it off as her own. (Original reddit post about the initial discovery here.) She even had the nerve to claim that the people she stole from were actually several of her own reddit accounts. When I heard that, I did give her the benefit of the doubt. But then I started Googling the text from her other articles at Red Sox Life. Sure enough, there were several more occurrences of her taking other articles and calling them her own. She was lazy enough to leave entire thoughts intact.

I kept digging, and found that--surprise!--this wasn't her first retread rodeo. I found something she wrote for a blog in 2009. I looked at the comment section and saw:

If one of my students handed this in, I would have reported them for plagiarism.

That's when I knew we had a serial stealer on our hands. I sent this info into the reddit thread, and the next morning I got a reply from the person who ran the blog which published the stolen article. He knew the girl personally and told me, from what I'd gathered from her duckface-heavy flickr page, exactly what I would have expected to hear about her. Just another attention-starved person who uses the Internet as the bad medicine to cure her disease. If you click the link above, you'll see he's added a disclaimer to the article, complete with links to the reddit post and his response to my comment.

His excuse for allowing the article to run seems valid. He had a new blog and had his friends contributing to it. He didn't have any reason to think someone would turn in an article that was stolen from somewhere else. And he didn't think anyone was reading anyway.

But what's Red Sox Life's excuse? This is a site connected to Fox Sports/MSN. To their credit, they immediately fired the copy cat and all her articles have been removed from the site. But shouldn't they do a little research before hiring someone? Or take a look at the first article she gives them to make sure she's legit before they post it?

Two writers over there have commented on my blog in the past. One you know from his cartoons--he's even drawn cartoons related to my stuff, which was an honor for me. Maybe one of these guys can comment here on what type of site this Red Sox Life is. I see the ticket-scalping agency they promote has seen its CEO go to jail for a hate crime (charges he later rebuffed). So that's maybe not the best start....

Back to the young woman who likes to steal stuff. I realize she has a problem. I hope she figures out her life. And the next time she gets a writing gig, she'll probably change her name. But if she doesn't... just be weary if you come across someone named Carina Avila or Carina Enright. According to that guy who knows her, she's loving all this and should anyone actually read this and it gets back to her, she'll be thrilled at even more attention. So congratulations, Carina, you're now "famous" in the bottom paragraph of a Red Sox blog that nobody reads because facebook has made it so people would rather look at their friends' breakfasts because god forbid they're the only one not in the loop as to what their third-grade teacher's anesthesiologist had for breakfast than read actual content about actual non-breakfast stuff.

Make that second-to-bottom. Carina, I beg you. Get help. There's more to life than taking a picture of your face and having people tell you you're "hot." Go do something good for someone. Find a fucking soup kitchen or something. You'll feel so much better. And please, when that homeless person thanks you for that chicken soup that the chef worked so hard on, don't take credit for making it!