All you have to do to see we're a selfish society is open your eyes, but I kinda thought we all had an agreement on this handicapped spot thing. I've never parked in one and I don't know anybody who has. But based on last night's display, now I'm wondering if this is just something everybody does, even my friends. As we know, people break rules based on how likely it is they'll get caught, with no regard to the effect breaking said rule has on other people. We even have commercials that tell you not to drink and drive "because you'll get caught," not "because you might kill everybody."

But back to last night: The first person was a woman with a very young child. While still pissed at her, I figured at least with her she probably thought she "deserved" a special spot--they do have these in some parking lots. When she got back to her gigantic vehicle, she buckled the kid in, started the engine, and got on the phone. Putting her kid's life in danger AND making disabled people walk farther, nice!

The second person was some guy, totally healthy, went in, came out, left.

The third person was a woman who further mocked the disabled by trotting up over the high curb. She even went to multiple stores. At this point I was hoping the person I'd dropped off would come back, because she's an old woman who takes a long time to get in the car. Her door was next to the offending driver's door. And it happened! That perfectly healthy woman had to stand there waiting for a REAL disabled person before she could get in her car. Man, that was sweet. But I wonder if the stupid woman even saw the irony. I would have loved to have said to her, "Oh I'm sure you understand, being handicapped yourself and all...."

Then as I helped my friend with her seat belt, we watched as a fourth perfectly abled person pulled his humungous truck into the handicapped spot.

Did I mention there were dozens of empty spaces all over this lot?

With a disabled person in tow, you may be wondering why I wasn't in the handicapped spot to begin with. Duh, because it was taken. Who knows if that car had a tag, but based on the 0-for-4 I saw, I'm gonna guess it didn't. (In fact, I originally had to drop my person off from about 50 feet farther away, and only moved into the next-to-handicapped spot while she was in the store.)

And just in case some of you are thinking, "maybe they didn't see the sign," well, there was the blue handicapped parking sign on a post right in front of that spot at eye level, AND the wheelchair logo painted on the ground in the spot. You can even see it from space: 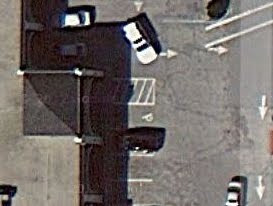 Whatta ya know, it was actually empty when the Google satellite passed over....

P.S. This was in Newport. So it could just be a study in how entitled people live their lives. But I'm guessing this is a much bigger problem. If you ever want to do an experiment, go hang out by a handicapped spot and watch the magic.

1. Canadian pitcher Ryan Dempster comes to Boston. He's kinda old and kinda stunk in his short time in the AL, but he can throw a lot of innings and is a wacky fun-time dude. (Which is good but it's funny how people automatically think getting "good clubhouse guys" means winning--if they lose, the same people will mock them for not taking the game serious enough and run them out of town until the new guys do poorly at which point they'll run them out of town, and on and on. The key to winning? Winning.) 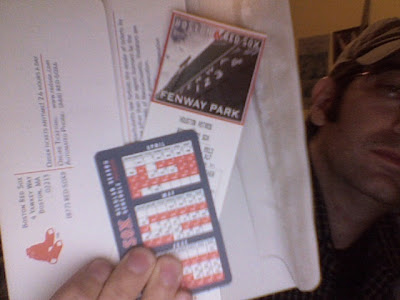 Instead of the classic pocket sked, there seems to be a little "schedule card." Maybe the pocket skeds aren't ready yet. Because they love to use those things for all kinds of ads and ticket offers and the seating/pricing. So I wouldn't think they've scrapped those. Since I only got one ticket, I've only seen the above picture. I wonder if they're all pic of Fenway, since it says "Fenway Park" right on the pic. I also see they're still making that mistake of letting the sticky stuff of the outer gray envelope stick to the inner white one.

3. New redsox.com background. The "collage" is dead. And now it's this blue-ish Fenway shot: 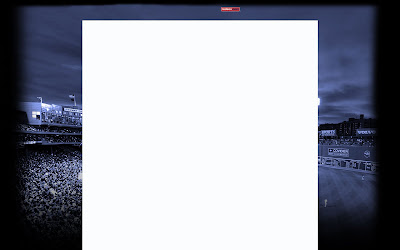 If you're thinking of figuring out the game shown, I'd say the key is the out-of-town scores. If you come up with anything, let me know. [Update, a few minutes later: You can see from the Monster that it's the 99th anniversary of Fenway, making it a 2011 pic. I went through that season looking for days with 4 AL games and 5 NL--doesn't take too long as you can skip Fridays, Saturdays, Sundays, and Red Sox road games--and came up with Monday, May 9th. The rest of the scores seem to line up with that day's schedule. It's Sox-Twins, Cuddyer and Span visible in the outfield, bottom 3rd, Pedroia up with a 1-0 count and Ellsbury on first.]

4. Mike Napoli finally changed his Twitter header. He had a little blurb up there about how the Rangers came close last year, and in 2012, the WS "will be ours." He has removed that. Now it just shows his name and location. So whatever it is that's holding up the announcement of his signing, don't worry about it.

P.S. Remember how certain so many people were during that HR Derby at Yankee Stadium that Josh Hamilton would instantly become a Yankee as soon as he hit free agency? Well, he hit free agency and he's an Angel. Terrible job, everybody who assumed. 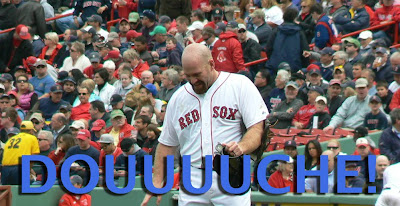 Is there anything less dignified in the human experience than saying "yes, I'll be a placeholder for A-Rod"?

And what is it with this entire Youkilis family? First the brother mouths off about how Youk will be so happy to leave Boston. Then there's an article about his dipshit uncle, who acted like Youk's whole life was just one long road to Yankee scumdom. And now Youk himself joins the rest of his despicable crew by actually agreeing to be the lowest of the low. If that jerk thinks he can skate by at Fenway because "boo" sounds like "Youk," he's sorely mistaken. I don't know what is going through these guys' heads sometimes. How can you go through so much with one family and then just turn around and SHIT ALL OVER IT? What does Youk want when his career's over? To be forever tainted in the eyes of those who adored him for so long, and be forgotten by the assholes who knew him briefly as a hired gun and hated him anyway? Maybe he's just so comfortable being hated that he figured this would be a good way to ensure that not one baseball fan likes him in the end.

The Incorrect-est Stat Of All Time

If you've ever listened to the FAN when they're talking about football, you've surely heard one of the hosts say:

"The Giants have won two Super Bowls in four years."

In fact, I've never heard anyone on there say it any other way. Mike Francessa says loud and proud every time.

Let's do a little counting:

Does anyone else see five years there? Trust me, this wouldn't be worth a blog post if I heard one person say the "2 in 4" line one time. But it's just the way the stat is said on that station, as if an entire year of history was erased from their calendar.

Now let's dig a little deeper here: You may say, "Well, come on, you know what they mean, the span of February 2008 to February 2012 is four years long. Within a 4-year time span, they won the game in question twice." But think of it this way. The Blue Jays won the World Series in 1992 and 1993. Have you ever heard anyone say, "the Jays won the World Series twice in one year!"? Or do we say the Red Sox won twice in three years? Or that the Yankees won "four times in four years" referring to 1996-2000? That would imply they won four in a row, which they clearly didn't. In sports, when you say "year," you mean "season." And by the way, even if there's anyone who could possibly defend this obvious mistake by saying that the two wins technically occurred within four 365-day periods, they'd still be wrong, as the 2008 win was on February 3rd, and the 2012 win was on February 5th. I'm thinking that these stooges all just subtract 2008 from 2012, come up with 4, and think they're talking about a 4-year span. But they should really think about doing some simple counting on their fingers and say it right.

P.S. Do some Google searching and you'll see it's not just the FAN. It's about four times more common to say it wrong than it is to say it right.

P.S. 2, The Squeakuel: If you think I'm nitpicking, you gotta do me a favor and read through this again slowly so you'll see that I'm exactly right.